PHILANTROPY IN EDUCATION TOWARDS THE GREATER GOOD

BEING Master of a Cambridge College has its highlights, one of the most pleasurable of which is meeting our benefactors.

My college, Gonville and Caius, has thousands of benefactors, but only the most eminent are commemorated in stone on the Benefactors Wall inside the Great Gate that looks onto the busiest part of Cambridge.

The first name on the wall is the co-founder Edmund Gonville (1348) and the 30th is Jeffrey Cheah, honorary fellow of the college. 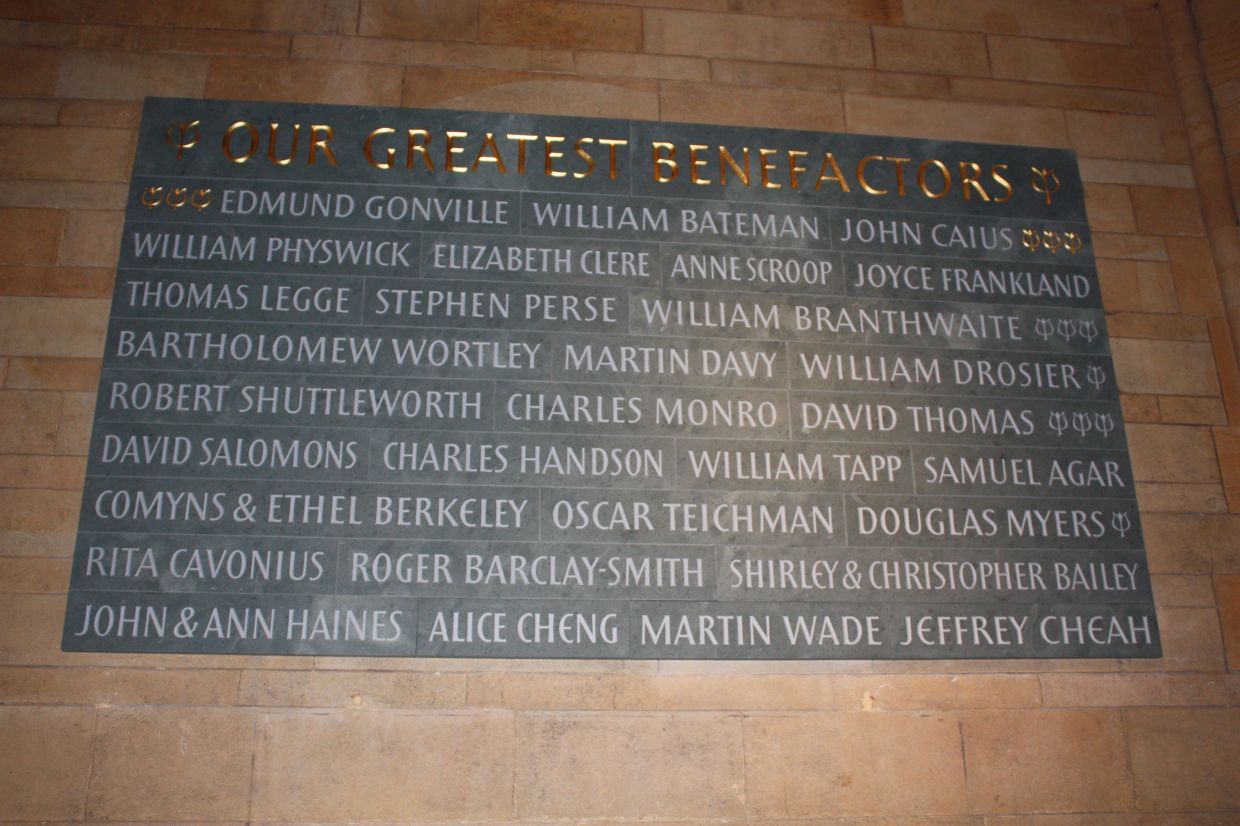 The Benefactors Wall at Cambridge College.

One of the greatest Jewish rabbis was Maimonides (1138-1204). As well as codifying religious law, he was also a philosopher, and his day job was being a medical doctor.

Indeed, he was physician to the great Sultan Saladin, and much admired by Islamic scientists and scholars.

This highest level of philanthropy encompasses precisely what Tan Sri Dr Jeffrey Cheah through his Foundation does.

Grants are awarded to scientists and educators to enable them to carry out their groundbreaking research and scholarship, and it works in partnership with them; this also financially supports young people massively so they will be able to undertake higher education, have jobs and contribute to Malaysian society.

To cap it all, medicine is a central part of those activities. Maimonides really would have approved.

It is for those reasons I have enjoyed so much my relationship with Tan Sri Dr Jeffrey Cheah and the Jeffrey Cheah Foundation – we are working together in a partnership that improves medicine, science and education in my college and university, and in our partner’s institutions in Malaysia for the benefit of the world.

I take pride in being an Honorary Jeffrey Cheah Distinguished Professor so I can continue being a small part in this great partnership.

Crises bring out the worst and the best in society. Some politicians who have spent their careers disregarding the truth have discovered to their cost and the even greater cost of their populations that viruses take no notice of lies.

Crazy groups protest against vaccinations and even claim that Bill Gates, who is a fine philanthropist, is putting microchips in vaccines, and 5G networks spread the virus.

But so many people in every walk of life are doing their bit, from delivery drivers dropping off goods to those isolating at home to people sewing masks and protective gear. Much kindness is shining through.

Low paid healthcare workers are risking their lives caring for the sick and elderly.

Doctors, scientists and engineers in global collaboration have risen as one to the task of tackling the pandemic.

Developments in biotechnology and diagnostics that have sprung from fundamental work on DNA, proteins and molecular and cellular biology are being employed in force.

Scientists are challenging ideas and concepts as new facts are discovered in order to make progress.

I take pride in being a scientist and being part of the scientific movement that has led to the breakthroughs that are allowing the rapid response to the crisis.

Experimental scientists, however, need considerable support and infrastructure in order to carry out this critical research. Much of it is provided by governments, but it is never enough and sometimes too driven by politics or not flexible enough for unpredictable innovation.

Long live philanthropy and those, like Tan Sri Dr Jeffrey Cheah, who selflessly practise it in the interests of mankind. 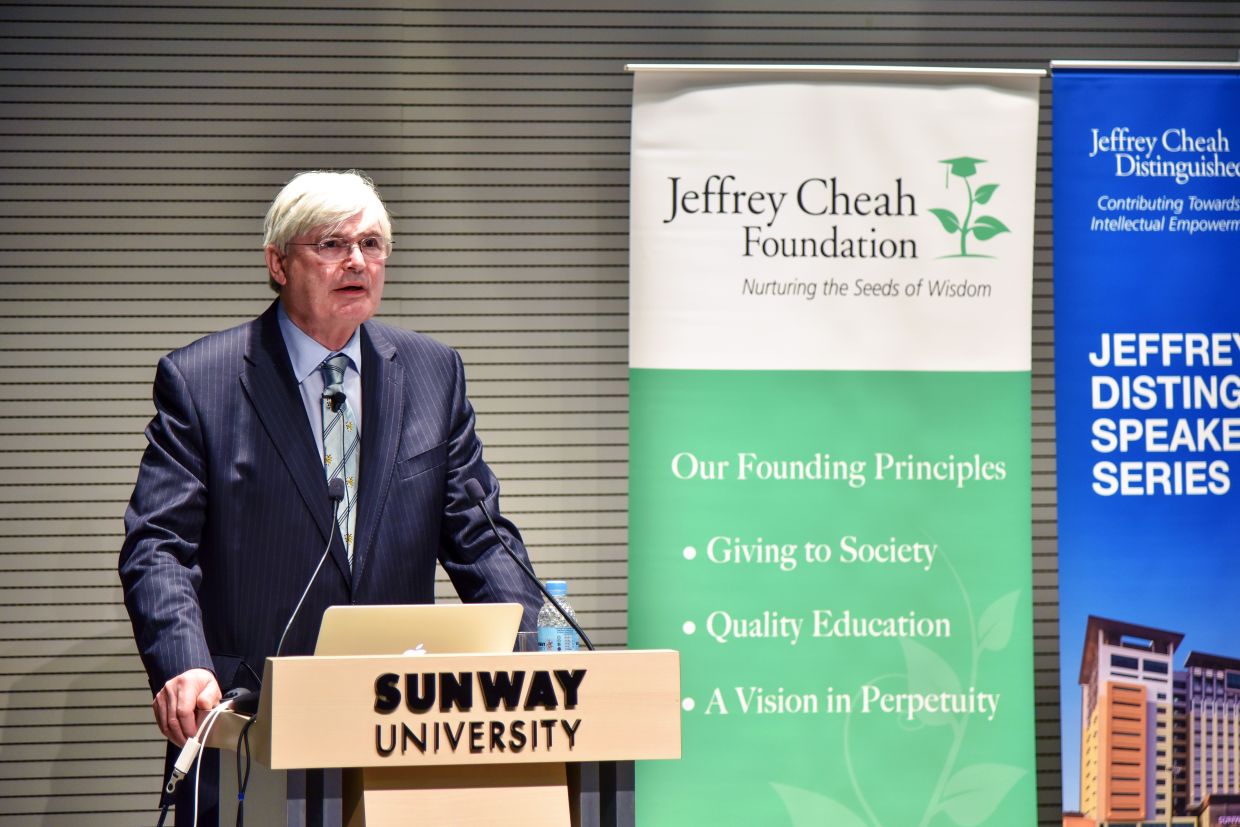 A world leading protein scientist, Prof Sir Alan Fersht FRS is widely regarded as one of the main pioneers of protein engineering, a process he developed to analyse the structure, activity and folding of proteins.

In August 2020, Fersht was awarded the Copley Medal of the Royal Society, the most prestigious science prize in the UK and the world’s oldest, dating back to 1731. The medal is awarded for outstanding achievements in research in any branch of science. Previous winners encompass the most famous scientists of the last few centuries including Joseph Priestly, Benjamin Franklin, Charles Darwin, Dmitri Mendeleev, Albert Einstein Niels Bohr as well as Francis Crick and Stephen Hawking, both Fellows of Gonville and Caius.

He is a member of prestigious UK and European academies – Fellow of the Royal Society of London; Member of European Molecular Biology Organisation (EMBO); and Member of Academia Europaea. On top of co-founding three biotech companies, Fersht is also the recipient of many global recognitions including the Gabor Medal of the Royal Society for Molecular Biology, its Davy Medal for Chemistry, and Royal Medal for his work on protein folding.

Both Fersht and Nobel Prize winner Sir Gregory Winter FRS, his collaborator, were knighted for their work on protein engineering.

This article is brought to you by Jeffrey Cheah Foundation in conjunction with its 10th anniversary.