The guests from Hong Kong marched into the school to the beat of kompang along with a procession of students dressed in traditional clothing, carrying bunga manggar and the flags representing all the states of the country.

MEANINGFUL was the most appropriate term for thec celebrations at SMJK Choong Hua in Bidor, Perak.

A group of special guests comprising 30 students and six teachers from Hong Kong’s Buddhist Yip Kei Nam Memorial College made a visit to the school.

Describing the event as a “double celebration”, principal Margaret Lim Pei Tee said it served to boost a cultural exchange and sharing of information between the students and teachers from Malaysia and Hong Kong.

“We also got to share the beauty of our nation to our guests.

“The main objective of the visit was to gain exposure and learn about both countries’ cultures and lifestyles,” she said.

The Merdeka exhibition focused on the diversity of the country and the different races as well as delicious local cuisine and fruits.

The guests from Hong Kong marched into the school to the beat of kompang along with a procession of students dressed in traditional clothing, carrying bunga manggar and the flags representing all the states of the country.

During the exhibition, students and the guests tried their hand at henna, batik painting and Rangoli.

“Our students felt honoured to introduce their beloved Malaysia to others,” she said.

She added that the event would not have happened without generous sponsors from the school board, Parent-Teacher Association, alumni, Perak Tourism Exco and Universiti Tunku Abdul Rahman (UTAR), Kampar.

The guests who were aged 14 to 16, teamed up with 30 SMJK Choong Hua students who were their guides during their three-day stay in Perak.

They enjoyed various activities including visiting the orchard at Kuala Bikam, a tour of the Kinta Tin Mining Museum in Kampar, an educational tour to the UTAR, Kampar campus as well as sight-seeing in Ipoh. By Lee Chonghui The Jalur Gemilang flies proudly across Taylor’s Lakeside Campus in celebration of Merdeka and Malaysia Day.

Claudina Sadai Yus from SMK Asyakirin in Bintulu initially shied away from speaking on the first day of the National Storytelling Camp organised by the Fulbright English Teaching Assistants (ETAs). That changed when she decided to follow her ETA’s advice.

“The ETA from my school advised me to speak in order to improve my English.

“I took his advice, and I can talk to everyone in English now,” said the student from Sarawak.

In conjunction with Merdeka, the ETAs organised the “Saya Malaysia, Kita Malaysia” National Storytelling Camp last month. The camp was held at Brickfields Asia College and involved 120 students from 20 secondary schools throughout Malaysia.

The goal of the camp was not only to strengthen students’ communication skills in English; it also aimed at encouraging them to reflect on their cultural identities as Malaysians and foster increased understanding with their peers across different races and cultures.

During the camp, students were trained to use various mediums for storytelling and self-expression such as journalism, spoken word and art.

The programme concluded with the students producing digital podcasts, poetry, art and articles of their personal stories as Malaysians.

The camp was sponsored by the United States Embassy in Kuala Lumpur with the support of the Education Ministry, the Malaysian-American Commission on Educational Exchange, Levelster and the Make-It-Right Movement.

A collaboration between the Malaysian and US governments, the Fulbright ETA programme aims to increase the use of English language among Malaysian students and empower rural communities.

Every year since 2012, 100 American graduates have been placed in secondary schools across Malaysia to engage students in interactive English activities inside and outside the classroom.

ETAs are paired with mentor English teachers during their 10-month fellowship to assist with teaching English and to organise English camps as well as speaking workshops for students. There are currently ETAs in Perlis, Kedah, Perak, Melaka, Kelantan, Terengganu, Pahang, Sabah and Sarawak.

Ruthran R. Machap from SMK Dato’ Dol Said in Melaka, said the ETA in his school used a lot of games to help students learn English in a fun way.

“Apart from learning the correct grammar and pronunciation, I also learn about dialects, slangs and cultures in America.

“The ETA in my school has made English a fun subject,” he said.Inspiring the nation

Taylor’s is celebrating Malaysian youth and their aspiration to inspire the nation to be the change they want to see in the country. #ichangeMY was launched with an aim to curate and drive these conversations on the social media platforms.

Taylor’s University Group Chief Marketing Officer Ben Foo said: “We recognise that the voice of Malaysian youth is getting louder and in this time of change, their voices matter more than ever.”

“Being an institution that believes in grooming the next generation of nation builders, we are excited to share our Merdeka-Malaysia day movement, which aims to drive social conversation among the youth on changes that they want to see in the country.

“At Taylor’s, we have passionate students and alumni who are not shy to voice or act on them.

“Significantly, this initiative would send a clear message to our future generation that we appreciate their passion in building up Malaysia.” he said.

To kickstart the campaign, Foo said that Taylor’s pays tribute to its community who wish for change and contribute to the betterment of the country, through a series of stories which encapsulate heartwarming actions.

Dr Camelia Kusumo, a senior lecturer at Taylor’s School of Architecture, Building and Design, is currently leading a research which aims to restore the historical core of Klang City.

“The royal town of Klang has an extensive history and I hope the study will give Klang a unique identity,” she said.

For Rick Chee, founder of Food Aid Foundation and a Taylor’s University alumni, the combination of science and technology to safely donate food gathered from industry partners and the public fulfilled his life’s purpose to close the gap in world hunger.

“I think it is morally wrong for us to throw our food away, when there are people in need of the food.

“I want to see a law, like the Good Samaritan law in place, so that we can cut food wastage and improve sustainability in our country,” he said.

Second year student in the Bachelor of Quantity Surveying, School of Architecture, Building and Design, Nurul Ahsha Roslim believes that the next generation carries the voice of Malaysia.

While for Winnie Lim, a first year student in the MBBS programme at the School of Medicine, helping the less fortunate is a necessity to overcome existing adversities to propel the country forward.

“As a Malaysian, I feel that I have the responsibility to give my love, care and time to the people who need it,” she said. The #ichangeMY will end on Sept 23. United States Ambassador to Malaysia Kamala Shirin Lakhdhir looking at the products by the students at the storytelling camp.

Sunway Education Group celebrated Merdeka and Malaysia Day with a “Sunway Friendship Week” which was held to facilitate cultural exchange among the diverse students of among its education institutions.

The event was organised by its Student LIFE department in collaboration with the Sunway University Student Council, Sunway College Student Council and Sunway Sports Council.

About 10 clubs and societies were also chosen to conduct mini station booth games to encourage the students to mingle with each other.

One of the highlights was the “Friendship Wall World Map” where the students placed stickers on airplane stickers to indicate their dream destinations and a house to indicate which country they came from so that they could get to know each other’s cultures and countries better.

Meanwhile, the “Take a Seat & Make a Friend” activity helped students take time off and have interesting conversations with strangers and exchange information about their own unique backgrounds.

A host of activities, such as “Pen Buddies,” a “Photobooth Contest” and “Interest Badges” were also created with the objective of allowing students to explore new friendships that facilitated a strong cultural exchange within the campus in creative ways.

There were performances galore by student teams with the Malaysian “24 Seasons Drums” as the centrepiece. The “24 Seasons Drum” is a Malaysian art that was invented in 1988 by a music teacher, Tan Hooi Song and a poet Tan Chai Puan, at Foon Yew High School in Johor where the drum rhytms are mixed with different beats from the Malay kompang and Indian to create a harmonious beat.

In the evenings Malaysian and international students participated together in various indoor and outdoor activities such as the “Board Games Night” and “PS4 Night” in the Student Hub and sports activities such as, captain ball, dodgeball, archery tag and badminton.

As a finale, a social gathering and movie night was held at Sunway University’s Lunchbox to cement the new friendship among the Malaysian and international students. 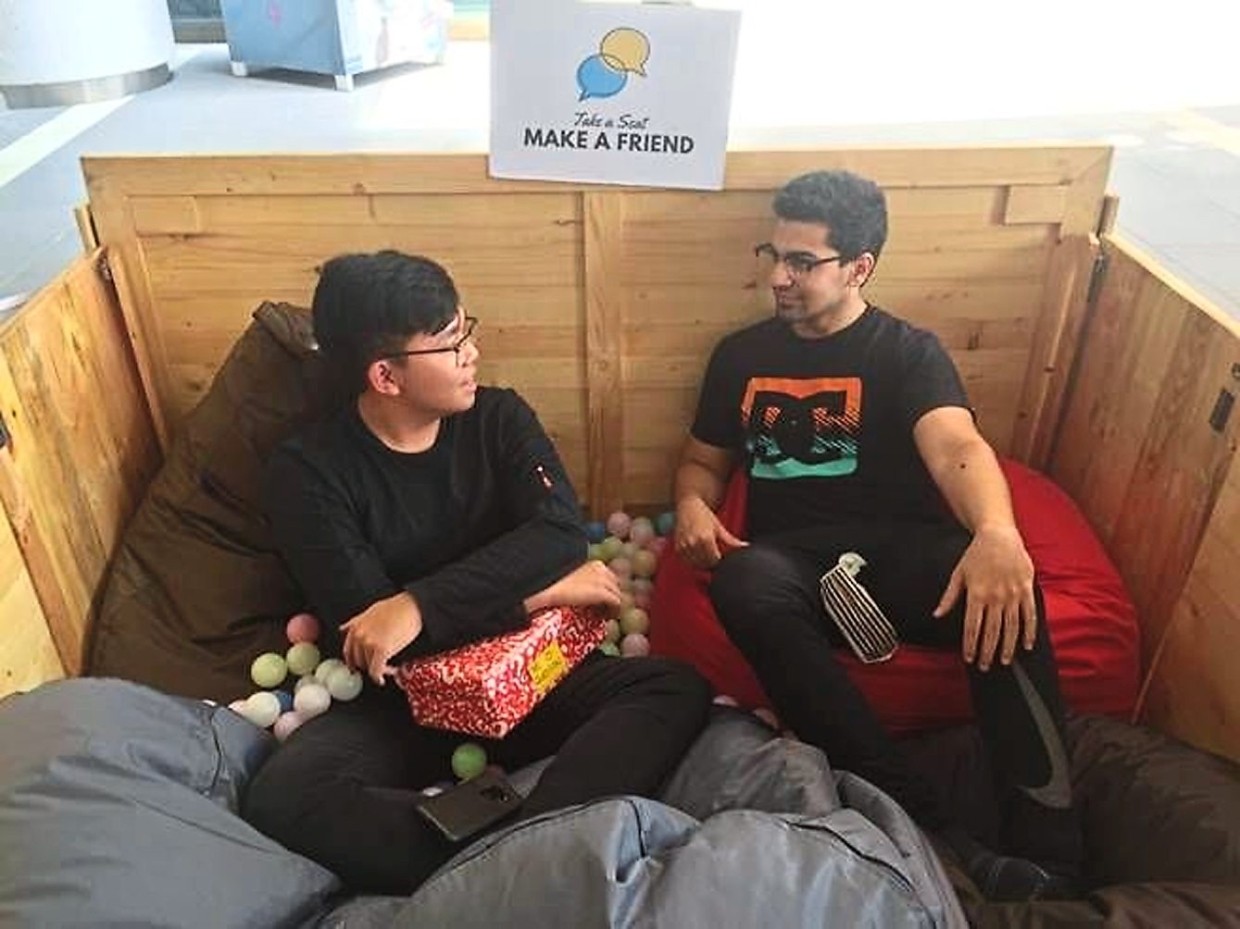 The “Take a Seat & Make a Friend” activity helped students take time off and have interesting conversations with strangers and exchange information about their own unique backgrounds.

To celebrate Malaysia Day, UCSI University instituted the Tan Sri Dr Omar Harmony Award to serve as a platform to inspire students to rise up as agents of social change to promote cohesion and harmony.

Launched just recently, the awards are aimed at promoting education as a force for good to address societal problems through the creation of social value in an effective manner.

Through this initiative, students can propose their ideas to empower the underprivileged, galvanise society, promote harmony and champion burning issues.

While there is no limit to the number of participants or groups, the event essentially promotes ideas that encompass values of social impact and sustainability.

The proposal, among others, must address an existing societal problem and suggest means to address it. It may be based on a non-profit, for-profit or a hybrid model.

Three winning projects will be selected and announced on Oct 1.

The university has set aside RM1,000, RM600 and RM400 for the first, second and third prize winners.

Winners will also get certificates. The initiative is in line with the United Nations’ Sustainable Development Goals (UN SDGs), focusing on target 4 – quality education, and target 16 – peace, justice and strong institutions.

The awards serve as a microcosm of the university’s drive in advocating the UN SDGs. As the only private varsity in the country to be awarded the Regional Centre of Expertise by the United Nations University (UNU), UCSI is looking to be in the forefront of impacting and empowering lives.

Another initiative the university has initiated to commemorate Malaysia Day is the National English Essay Competition. In this competition, upper secondary school students are asked to write about their thoughts towards nation-building.

This is a step in the right direction for students to conspicuously articulate their ideas and ideals on how the nation should move forward.
Article type: metered
User Type: anonymous web
User Status:
Campaign ID: 1
Cxense type: free
User access status: 3