(From left) Prof Asma, Munirah and Graham with the champs Yalini, Krishnan and Kang Howe who are holding the trophy.

SCIENCE is more than calculations and scientific knowledge as the human element is just as vital.

Under the tutelage of his teacher Mohd Azlie Abdul Aziz, the Form Four student from SMK King George V, Seremban and his teammates Krishnan Selvarajah and Yalini Arunasalam, beat three other schools in the finals held at Universiti Malaya.

The annual National Science Challenge is organised by the Academy of Sciences Malaysia (ASM) with the support of the ExxonMobil Subsidiaries in Malaysia, to increase interest in Science, Technology, Engineering and Maths (STEM) among secondary school students.

ASM president Prof Datuk Dr Asma Ismail said 2,442 teams from across the country participated in the preliminary level of the competition.

A deep understanding of mathematics, physics, chemistry and biology subjects and the winning school’s team spirit was displayed throughout the finals.

“The competition was tough, so I was happy when we were announced as the winners! When great minds work together, great things will happen,” said Kang Howe who is an aspiring rocket scientist.

His passion for science made him leap at the opportunity to participate in the competition when his teacher brought it to his attention.

Krishnan was overwhelmed with the judges decision.

“I couldn’t believe it at first. Having hands-on modules during a science camp we attended for the competition was very helpful - we learned to apply science in our daily life,” he added.

Quivering from the excitement of it all, Yalini too, found the science camp the best part of her NSC experience due to its hands-on modules.

A once in a lifetime opportunity awaits the teenagers - as champions, they will be flying to Stockholm, Sweden to attend the Nobel Prize giving ceremony.

“I am excited with this opportunity,” Kang Howe shared.

Chief judge of the NSC 2018 Helen Nair commended the quality of student participants and the standard of questions asked.

The judging process, she said, was rigorous and well-managed.

Stressing that more schools and teachers should encourage their students to attend and/or participate in competitions like the NSC, the ASM fellow said: “Students will get the feeling that science is exciting and they can benefit from it, and see the wider world rather than just (learn from) their books.”

Echoing the students’ sentiments on the level of difficulty of the questions was US Ambassador to Malaysia Kamala Shirin Lakhdhir.

“I was able to answer just one question!”

Proud of the four teams’ performance, Lakhdhir said their presentation touched on the element of humanity “that science needs to bring and the benefits we need, to have a better world”.

“I hope you will come home and take the experiences you had, not just in science and technology, but also in culture and seeing a different world, and bring it back to the benefit of Malaysia and to yourself.

“I also support STEAM which adds in the arts, as scientists need creativity, inspiration and to think in very different ways.

“They need to think about what they create and how it contributes to a better world; there are ethics and morality in science,” she added.

Second place winners MRSM Tun Abdul Razak, Pahang, were awarded with a cultural exchange programme on STEM to the Silicon Valley in San Francisco, sponsored by the US Embassy in Kuala Lumpur.

The third and fourth place winners, Kolej Yayasan Saad, Melaka and a wild card team from Kedah respectively, will get the opportunity to travel to Japan next year for a week-long study visit under the Sakura Exchange Programme, fully funded by the Japan Science and Technology Agency (JST).

A new concept introduced in the NSC 2018, the fourth place winners were a combination of three best students.

Congratulating the winners, Prof Asma who is also Universiti Sains Malaysia vice-chancellor, said it is vital to start nurturing talents by cultivating the younger generation’s interest in STEM.

“ASM has organised the NSC since 1999 to serve as a platform to nurture scientific minds and interest in STEM among the younger generation.

“It is hoped that the study visits will provide valuable experiences to the winners and also broaden their horizon on the current science and technology development,” she said.

A sufficient pool of talent in STEM education is necessary in order for the country to thrive and play an important role in the fourth industrial revolution, said Deputy Energy, Technology, Science, Climate Change and Environment Minister Isnaraissah Munirah Majilis. Saving the world with science 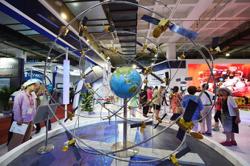