Field job: Devraj Sathivelu getting a feel of the local way of life.

A group of youth comes together to help uplift the lives of local Bario folk, bridging the gap between two diverse communities.

TOILING in the padi fields, putting out bushfires – or just “chilling” in the longhouse balcony where a view of the lush mountains and deep blue skies beckons.

Together with their tepuq or sina, these, among other things, are what Project WHEE! participants get to experience in Bario, Sarawak.

(In Kelabit language, the elders are called tepuq while aunts/mothers are known as sina.)

The participants, mainly from the peninsula, are chosen to head to Bario in batches, with the duration usually lasting three weeks per trip.

Their mission – to teach Kelabit womenfolk basic English with the aim of helping them upgrade their livelihoods. WHEE! did it: (From left) Lee, Hagedorn and Daniel.

The daily routine of these women includes trudging through muddy roads, working back-breaking hours in the padi fields and tapioca farms, and picking jungle vegetables.

Power supply in the Bario Asal and Arur Dalan villages where these women live is switched off by 10pm.

Most of the folk here lead self-sustained lives, consuming the vegetables, padi and fruits that they grow.

Project WHEE! is named as such for “We the people; Helping those in need; Exceeding expectations; Empowering others”.

The participants, made up mainly of urban youth aged between 16 and 25, accompany the Kelabit women from the start to the end of their work day, which is usually from 9am to 4pm.

What’s interesting about the programme is that instead of a typical classroom setting, the participants make full use of the environment and context.

The English teaching-learning process is one which happens “on the field” as the women go about their routines. 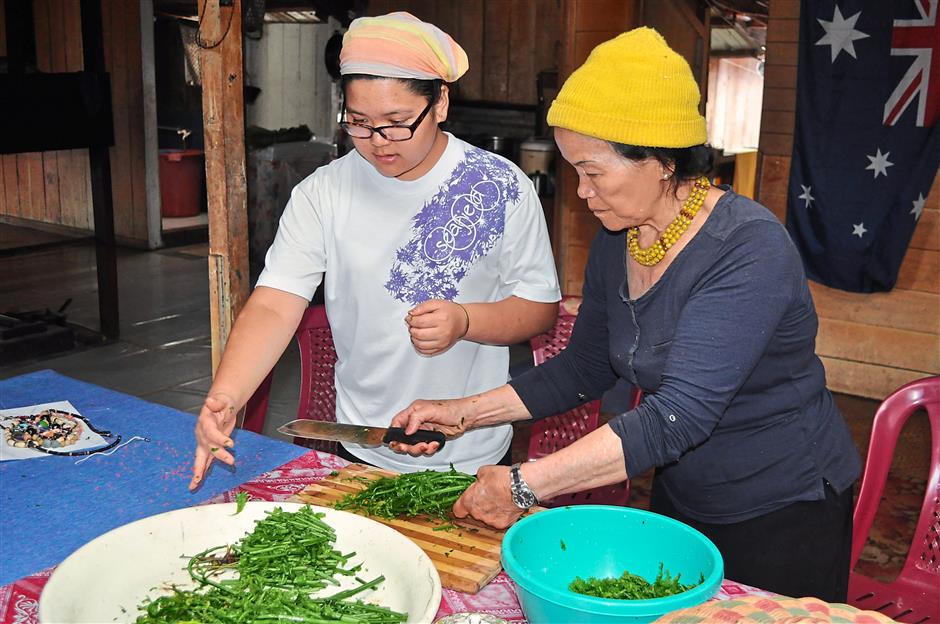 Lessons in the kitchen: While Sina Rang learns English from Kimberly Ong, the girl picks up cooking tips from her host.

The English words which are taught are to prepare the women for encounters with foreign tourists.

Thus the focus on English with the Kelabit women, some of whom are already grandmothers!

While the participants come in batches, the chosen 15 Bario women go through the programme until they are comfortable with the language.

The programme kicked off in May 2014 with a RM50,000 grant from Dana Belia 1Malaysia, a RM20mil fund set up to fund creative youth projects.

Project WHEE! founder Rhonwyn Hagedorn, 21, and co-ordinators Daniel Devan, 21, and Lee Rui Ci, 20, say that it is important that the Kelabit women be “equipped for a purpose”.

“We’re not just teaching English for the fun of it. We want the women of the community to be able to handle tourists,” Daniel stresses.

Hagedorn says women are the core of the programme as all the ecotourism “trails” that have been developed are catered for them, such as padi-planting, conducting dancing lessons as well as cooking demonstrations.

The men in the Kelabit community typically earn their living through contract work, hunting or logging.

Hagedorn was in the midst of an internship with non-profit social enterprise eHomemakers when she stumbled upon the idea for Project WHEE!.

“eHomemakers already had a project in Bario to help the women there earn extra income,” she says.

It dawned upon Hagedorn that it would be difficult to achieve the goal if the women were unable to understand or speak English.

“That’s the reason why I started this project,” she explains. 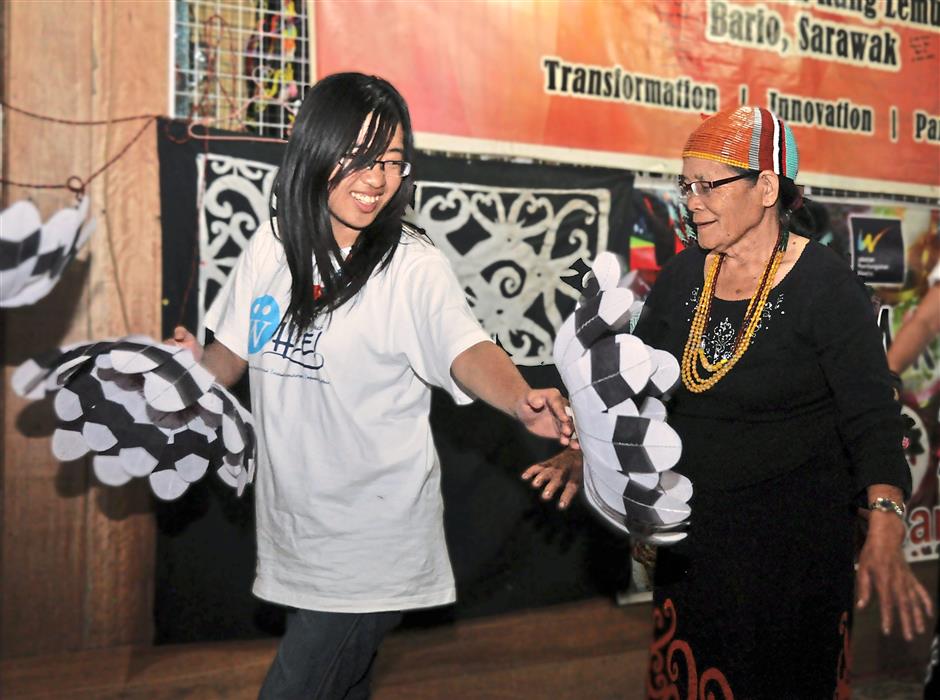 During one of her initial visits to Bario, Hagedorn says she felt a compulsion to do something extra for the womenfolk.

“There is so much love here ... it’s a really special place,” she says.

Hagedorn realised that she could not handle everything on her own. That was how Daniel and Lee were roped in.

As coordinators, the trio do everything – from recruiting participants, managing accounts and giving talks to coordinating the logistics in Bario.

Though the work is stressful, Hagedorn says the three of them have managed to pull through so far, like a three-legged stool that can still stand firm.

The trio, who are currently in their gap years, say they did not expect to get this far in the project.

“I thought Project WHEE! would be a one-off event ending in 2014. But it turned out to be much bigger than that,” says the Kuala Lumpur-born Hagedorn.

Daniel, who has completed his A-Levels, adds: “I never expected to do anything like this. While I knew I would be joining something in my gap year, I didn’t think I would actually be involved in anything as meaningful as this.”

Lee also thought that she would go straight into university after her A-Levels.

“But I wasn’t sure what I wanted to do and what was out there, beyond academics,” she says.

Journey to the Highlands

Bario is located in the valleys of the Kelabit Highlands near Miri, bordering Kalimantan, in north-eastern Sarawak.

Despite its remoteness, there is infrastructure such as an airport, telecentre for Internet access and computer services, clinic, police station, schools, churches and shops.

For thousands of years, the natives of Sarawak have planted various types of rice. The most well known is the Bario variety, which is regarded as the premium in the state.

Bario is affectionately known as the “land of a hundred handshakes” as this is how friendly locals will greet you as you wander around. Fun and games: Off-duty Project WHEE! participants having a ball of a time playing in the padi fields.

As all roads here eventually lead to Bario, it is also known as the unofficial capital of the Kelabit Highlands.

Many will enjoy getting a ride to their destination on a 4WD vehicle.

At the beginning, Project WHEE! was indeed a bumpy ride, Hagedorn admits.

“When we first started approaching people, no one took us seriously. We were just 19 then. People couldn’t see why we were doing this,” she continues.

The “unusual concept” of informal teaching also made it hard for people to support them, says Daniel.

“To me, it was exciting. But to others, we had no precedent that it would definitely work.”

Surprisingly, language was not a barrier among the participants and the women in Bario, Daniel says.

“They usually start off by communicating in Bahasa Malaysia.

“The real ‘barrier’ was in getting the women to understand the concept of our programme and for the participants to get used to the Bario way of life,” Daniel points out.

Also, it was quite a task trying to coordinate up to 15 participants sent to Bario per trip.

Prior to leaving for the programme, the participants are required to pay RM3,500 each to finance their stay in Bario.

The cost includes flight, transport, training, and food and accommodation in Miri and Bario.

Most participants choose to raise this amount, usually through car washes and crowdfunding.

Lee says her parents sometimes felt like she was wasting her time.

“I just hope that they can see the value of what I’m doing, which is really helping to make a difference,” she stresses.

Daniel confirms this, adding that as coordinators, they returned to Bario often to check on the progress.

Hagedorn has one word to describe the progress of the project thus far – “Amazing!”

For every challenge they faced, Hagedorn, Daniel and Lee retain only good memories.

Having been “accepted into the community”, the three have been given Kelabit names – Sekan, Agan and Ganit respectively.

Also, the team didn’t expect the participants to get so attached with the Kelabit women.

“The shadowing method was to allow them to get close so that the women would be more receptive to learning English. 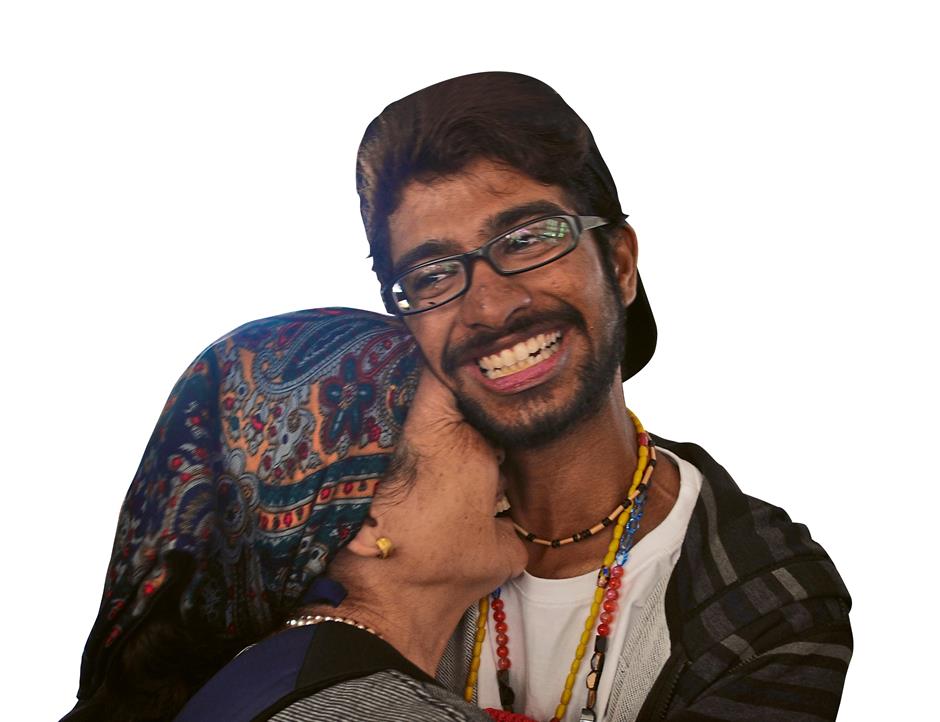 “Participants got to bond with one person but as a coordinator, I enjoyed the opportunity to interact with every family,” says Daniel.

“That’s only because he has a way with the women in Bario,” jokes Hagedorn. “But really, all the women tell him ‘Eh, pandai cakap Kelabit!’ although he actually says only one word in Kelabit!” she says with a laugh.

On a more serious note, their efforts to bring young adults back to Bario are also beginning to bear fruit.

Before this, young Kelabit people who expressed interest in returning to Bario could not find work there.

The Kelabits, which make up the smallest ethnic group in Sarawak, number over 5,000 people.

Many have opted to migrate to urban areas over the last 20 years. An estimated 1,200, comprising young children and older folk, still live in their homeland.

For the trio, they can “already see the change”.

“When I went to Bario early this year, one of the homestay owners’ son had come back. Now, he plans to work in Bario, including setting up his own homestay,” shares Lee.

“But you can’t expect us to go on forever,” Hagedorn says matter-of-factly.

This is why the project is big on self-sustainability.

Eventually, they hope to cultivate a help system within the community for those who are better adapted to English to guide the others.

Hagedorn sees this happening and applauds the Kelabit women for their initiative. 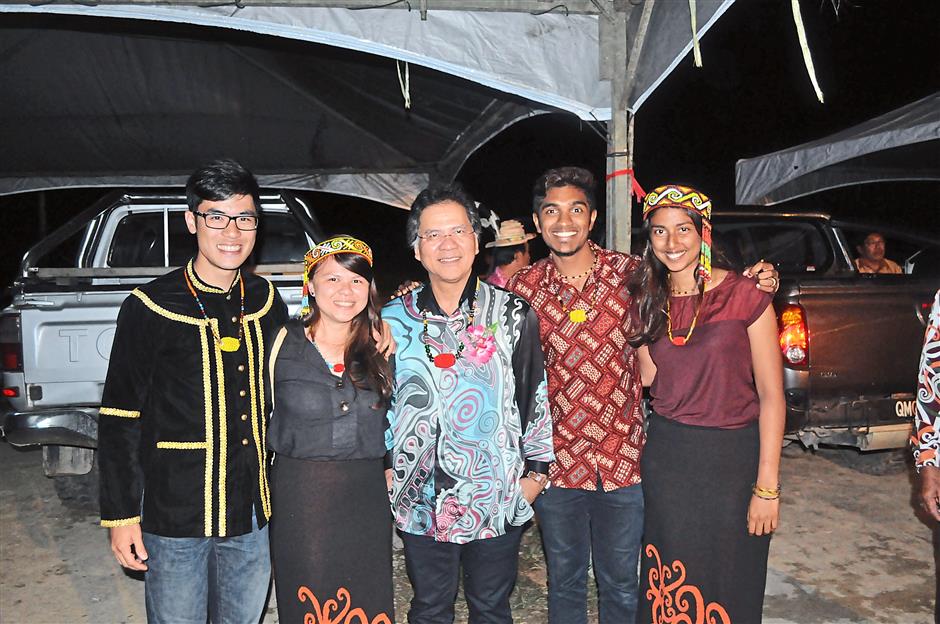 “Some have started compiling tiny dictionaries in exercise books to help themselves. This is really good,” she adds.

What Project WHEE! has done is bridge the gap between the urban youth and the Kelabits, two very diverse communities.

“With every batch, we see youth experiencing changes. We are so happy to be a part of their development,” says Hagedorn.

Daniel shares the one thing that keeps them going.

“It’s the beauty of the programme itself. Seeing the ‘magic’ happen again and again. Different people bring different things to the programme, and they’re all great,” he says.

“The exchange is just so rewarding. Participants are trained to offer their services, but they come back with so much more,” he adds.

“We hope to move on to other communities who need programmes like this. Be it in Malaysia, Cambodia or Vietnam,” a spirited Hagedorn concludes.

The sixth batch of Project WHEE! participants will head to Bario on May 9. Those interested in joining can opt for the August or November batches. For details on Project WHEE!, visit facebook.com/projectwhee or their blog theprojectwhee.blogspot.com