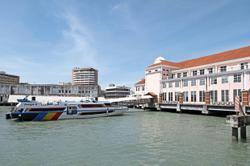 Swettenham Pier Cruise Terminal will rebound when its RM155mil expansion is completed at the end of the year and cruise ships can berth again.

JUST when we thought 2021 would have more of the same things we had in 2020, things got worse.

There wa2s the declaration of Emergency after almost 52 years since the May 13,1969, riots.

And then there are the four-figures of daily Covid-19 cases.

Did you know that the MySejahtera app in your smartphone will tell you how many Covid-19 cases are detected within 1km from your location in the last 14 days?

Call up the app. Tap the Close button on the top right of the default Check-in page. Then tap the Hotspot button. Key in the name of your street or apartment building and you will then be told how many cases were found around you in the last two weeks.

Eighteen cases were reported 1km around my home in the last 14 days.

Unless you live in the hinterlands, chances are that you will see at least double figures of cases around your home ground. That is how serious it is now.

Penang is facing one of its greatest challenges because our economic mainstays – manufacturing and services – are being bludgeoned by the pandemic.

Tourism is at a complete halt. Mukim 12 in the southwest district and Mukim 13 in the northeast district, where many factory

workers stay, are recording high numbers of confirmed cases every single day since November, putting factories in a tight spot.

But I am one to search for that silver lining before giving in to despair.

Penang has been down this road before, a downturn which is part of the cycle in the manufacturing sector that gets a slide every 10 years, on average.

The last one happened when the world economy took a hit during subprime crisis in the United States from 2008 to 2009, with banks folding and businesses closing down.

Central banks of governments all over the world pumped in massive amounts of money into their economies.

Penang should be given credit as it was the first state to come out with a Covid-19 economic stimulus package of RM75mil last March, followed by RM76mil last May and RM20mil more recently.

It still won’t be easy as these stimulus packages are akin to jump-starting your car when your battery is dead. You still need a new battery.

Major projects like the components of Penang Transport Master Plan including Bayan Lepas Light Rail Transit, Pan Island Link 1 and Penang South Reclamation must move, with or without Federal help. Tenders must be called and

projects must be awarded to get the normal economic cycle churning again.

All said, Penang is in a better position compared to other states as we have a strong manufacturing base, with the highest approved foreign direct investment last year during a pandemic year.

The state is the only one with cruise and container terminals, the performances of which are barometers of the health of Penang’s economy.

While North Butterworth Container Terminal has weathered the effects of the pandemic well, Swettenham Pier Cruise Terminal (SPCT) was badly hit by the ban on cruise ship arrivals.

But SPCT will be in the right position when its RM155mil expansion is completed at the end of the year. When cruise ships can berth again, SPCT will bounce right back.

For now, at least two big cruise companies are poised to begin local cruises or ‘cruises to nowhere’ which will bring back the hustle and bustle at SPCT.

Our tourism sector, a major money earner, is suffering immensely.

But when interstate travel was allowed in December, you should have seen how many domestic travellers came marching back into Penang.

The beach hotels in Batu Ferringhi recorded three-figure room occupancy on weekends and rushed to hire casual workers to cope with the strain of maintaining their level of four or five-star services.

I have no doubt that as soon as we flatten the infection curve and domestic leisurely travels are allowed again, visitors will flock back here.

Penang just has to be patient for now. Penang’s state coffers have a reserve of RM1.15bil as end-2019, a comfortable figure for a tiny state, which is testament of a well-managed economy.

It is a politically stable state with the Pakatan Harapan government holding a comfortable majority.

Although a lot of work needs to be done, rising again might not be such a herculean task for the Pearl of the Orient.