The P107 route will be terminated once the MRT Putrajaya Line Phase Two feeder bus service starts operating in March.

NADIPUTRA’s ridership almost doubled in the first two weeks of this year after a new management took over its operations.

He said there was an average of about 900 daily passengers compared to 500 in the past.

“The highest ridership recorded to date was on Jan 10 with 1,484 passengers,” he said.

Route P101 from Kompleks F to Precinct 5, which is a free service, had the highest ridership so far, he added.

The revamped Nadiputra service kicked off with seven new routes.

A fare of RM1 was introduced to the previously free service to six of the routes, except for P101.

StarMetro in its report on Dec 30, “RM1 fare for Putrajaya buses starting Jan 1” obtained feedback from regular commuters on the new routes.

Some expressed concern that they would have to take two buses compared to one under the previous operator.

On Jan 16, a temporary route, P107, was added to support connectivity from Putrajaya Sentral in Precinct 7 to Precinct 9, Persiaran Perdana and Dataran Gemilang.

Muhammad Yazurin said together with Putrajaya Corporation, which is the provider of the Nadiputra service, route and feedback assessment would be done on a regular basis.

He added that route P107 would be terminated once the MRT Putrajaya Line Phase 2 feeder bus starts operating in March.

Regular bus commuter Ismayante Ramli from Precinct 9, is happy to be able to take the bus again.

Since Jan 1, Ismayante said she had to use ehailing services to get to and from work.

“The new route passes through another bus stop but I needed to walk uphill to get there.

Another commuter, Samsul Yekob was satisfied with the current routes and said the bus condition was also better.

“But I hope the management will introduce a real-time bus monitoring system through an app as the current web-based one is not accurate.

“People do not like to wait for a long time for buses and this prevents more from using the service,” he said.

“If I am based at my office the whole day, I have no problem taking the bus to work.

“People should support the public bus service, but I notice that most of the buses, except for P101, have very few passengers,” he said. 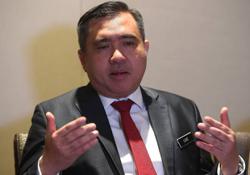