Mohd Noorazam says it wants to raise awareness among motoriests to be responsible and considerate to other road users.

THE Johor Baru City Council (MBJB) is aware of parking issues in Kim Teng Park and has taken appropriate action to deal with the matter.

Mayor Datuk Mohd Noorazam Osman said, however, the city council would not take drastic action to tow away cars, even though it has the power to do so.

Instead, he said MBJB will use a more humane approach and raise awareness among all motorists in Johor Baru, not just in Kim Teng Park, for them to be responsible and considerate to other road users.

“We are aware that some motorists are misusing spaces and treating them as if they were their own personal parking.

“Many Malaysians who go to Singapore for work leave their cars in Johor.

“Although we can tow away these cars, we hope to find ways to alert vehicle owners that their cars will be towed.

“So that is why, starting this year, our enforcement team will make an announcement for the first five minutes.

“This is to notify vehicle owners, especially those who have parked their cars in an undesignated location or blocked any route,” he said.

Mohd Noorazam said the city council is currently upgrading its tow truck to be equipped with sirens and loudspeakers to improve its operations. Mohd Noorazam says it wants to raise awareness among motoriests to be responsible and considerate to other road users.

“If the enforcement team does not receive any response, then their vehicle will be towed,” he said, adding that motorists would need to pay around RM500 to get their vehicles back (depending on the offence).

When asked to comment on the city council’s decision to fine commercial premises RM500 for obstructing parking spaces, Mohd Noorazam said it will continue to do so.

“There are those who say that it is easier said than done, but that is why creating awareness is important.

“If more people are aware of their own or others’ actions, we can reduce issues like this,” he said.

The Star reported on Jan 3 on the RM500 immediate fine for premises ‘reserving’ parking spaces, which is illegal.

They can be arrested under Section 50(3) of the Road Transport Act 1987 for unlawful interference and importuning, which carries a maximum fine of RM2,000 or jailed up to six months, he said.

Mohd Noorazam added that MBJB has received numerous complaints about property owners who attempted to reserve parking spots exclusively for their customers.

“Some premises place chairs or pails in front of their shop to deter non-customers from parking, which is an illegal act.

“Based on my personal surveillance, this usually occurs after 6pm,” he said.

The compound would be issued under Section 46 of the Street, Drainage, and Building (Amendment) Act 1993 for placing obstructions in public places.

“Any premises owner who wishes to reserve parking spaces can apply to rent the bay for RM150 per month.

“They can apply for up to three months,” he said, adding that the council issued 156 confiscation notices to premises owners last year.

“We have confiscated cones, chairs, barrels and other items that have been placed on parking spaces.

“We have also issued 473 compounds worth RM236,500 for violating the use of parking spaces,” he added.

When asked whether clamping was an option he said: “The situation in Johor Baru is different from Kuala Lumpur. Here we have many people working in Singapore who leave their cars at the parking lot, sometimes for a long time, so clamping these vehicles is not our option.”

He added they would tow these vehicles under Section 64 (1) of the Road Transport Act 1987, where an MBJB traffic warden can impound a vehicle for the purposes of identifying the owner or halting a continuous offence.

“We have noticed that in areas such as Bazar Karat, Jalan Ibrahim and Jalan Wong Ah Fook, there are irresponsible individuals who act as parking attendants and collect fees from the public. 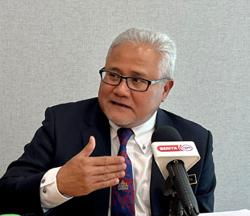