Nearly there: The seven-storey carpark at Penang International Airport in Bayan Lepas is 99% complete. — KT GOH/ The Star

PARKING woes at the Penang International Airport (PIA) will be a thing of the past as its multistorey carpark is expected to open next March.

The 2,200-bay covered carpark will be able to cater to the needs of travellers who can now leave their vehicles at the airport when heading out on short trips.

“I was informed by Malaysia Airports Holdings Bhd (MAHB) that the carpark construction is 99% complete.

“There were issues with the main contractor but they had been resolved.

“It was initially supposed to open to the public in December but this had been tentatively postponed to March next year,” said Zairil who visited the site earlier this month.

“Based on the briefing, there will be no new additions to the carpark,” he said.

The airport with a capacity of 6.65 million passengers per year welcomes some 18,200 passengers daily since the lifting of movement restrictions caused by Covid-19.

“The numbers are rising as more and more flights to Penang are resuming now,” said Zairil.

“The last time we were informed of the numbers by MAHB, the airport was handling around 14,000 to 15,000 passengers per day but this was a while ago, pre-Covid-19,” he added.

During the construction stage, visitors had a tough time looking for parking bays as these were severely limited and scattered around the airport compound.

The construction of the carpark is part of the PIA expansion project mooted in 2008.

However, the project stalled when the government put on hold proposals to build new airports and upgrade existing ones until the aviation sector recovered from the Covid-19 pandemic.

On Oct 5, 2021, it was announced that the PIA upgrading works by MAHB would be postponed while the government looked into several issues including land acquisition.

In a March 27, 2021, report in The Star, then MAHB chief executive officer Datuk Mohd Shukrie Mohd Salleh said that based on the MAHB Penang Airport Masterplan, the PIA would have the capacity to handle 25 million passengers a year.

The 87-year-old airport has undergone several infrastructure expansion over the years, the first starting in 1977.

It was fully operational in 1979 with the capacity to accommodate 1.5 million passengers.

At present, the four-phase PIA expansion project is on hold pending finalisation of the National Airport Strategic Plan (NASP).

The NASP study on airport development is expected to be completed in 2023 in line with the National Transport Policy.

Currently, those using the parking bays are charged RM2 per hour for the first 12 hours while the rate for parking between 12 and 24 hours is RM24.

Another option is valet parking where motorists are charged RM6 per hour if it is less than 24 hours and RM40 for 24 hours.

A parking attendant, who declined to be named, said many had asked when the multistorey carpark would start operating as they preferred parking their vehicles in a covered lot.

“We have come across many people who leave their cars overnight here as they find it convenient when making short trips.

“Our regulars usually travel for work and leave their cars behind for a night or two.

“They say it is cheaper to pay for the parking here than to take a taxi or use an ehailing service,” he said.

The parking attendant, however, said most of the travellers were concerned about parking their cars out in the open space.

“They prefer parking somewhere that is covered as our weather is unpredictable, and they feel it is safer to leave their vehicles in a building.

“The new multistorey carpark will definitely encourage more travellers to leave their cars here and fly, especially for short trips.

“Besides that, the problem of shortage of parking bays will also be solved once the new carpark opens.

“Since the construction started, many people have been parking illegally while others have had to drive around in circles to look for a parking spot,” he said. Nearly there: The seven-storey carpark at Penang International Airport in Bayan Lepas is 99% complete. — KT GOH/ The Star

Bays in the open-air carpark are often taken, so some motorists have to park wherever they can find space within the grounds.

Zairil: The opening of the new parking facility has been postponed to March. 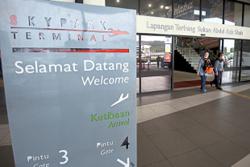