Honouring heritage: (From right) Zul Fadzly, Nor Azrina and Yezreen standing in their Mok Pod, which is inspired by ‘Rumah Ibu’ and draped with batik cloths featuring the state flower, Bunga Tanjung. — Photos by AZLINA ABDULLAH/TheStar

Tourism Selangor plans to tap into the pool of local talents and turn their works of craft into tourism products.'

LOCAL crafts, especially, are a valuable part of the nation’s heritage. With its potential to draw the interest of travellers from all over the world, Tourism Selangor hopes to tap into it as a tourism product in future.

The agency has taken the first step of encouraging and gathering such artistic craftworks by organising an exhibition at Shah Alam Gallery in the Selangor capital city. The Tukang – Design and Craft Festival 2022 is the first of its kind crafts event by Tourism Selangor that aims to recognise skilled craftsmen in the development of heritage craft arts, explore crafts as part of the state’s tourism product as well as spread awareness on traditional craft-making, its culture and heritage.

Prior to the festival, the agency called for entries (solely works of craft, no paintings) and received 37 entries from craftsmen, artists and designers. Six were selected as winners and they received RM10,000 for the production of their works now exhibited at the gallery.

Tukang exhibition curator Dr Nursuliana Sulaiman, fondly known as Suzy, said the winners were picked based on skills and innovation in their crafts as well as the community engagement during the craft-making process. Leon and Hani with their work titled ‘A Piece of Kampung’.

“We wanted to see how craftsmen integrate these elements in their crafts by identifying the potential and heritage of Selangor. “We also look at how each group perceives and tells the story of Selangor through their crafts in unique ways,” she said during the unveiling of the winners at the Shah Alam Gallery.

“Tourists now want new experiences and creative tourism. “Although we have a lot of popular places of interest in Selangor, such as Batu Caves, presently we want to focus on the talents in Selangor,” she said. “It goes hand-in-hand with promoting our existing attractions like the Shah Alam Gallery. “The festival will pull in the crowd and more people will know about the gallery,” Chua added.

One of the most interesting pieces in the show was inspired by patterns found in the Temuan culture.

The installation, titled “Re-Vision”, was crafted from both digital and analogue fabrication techniques Its creators Ignatius Andi Permadi and Gwyneth Jong wanted to tell the story of the Temuan people through their art installation using a contemporary technique. Jong at the art installation Re-Vision, a work of light and patterns inspired by the Temuan culture.

It integrates light and colours in a triangular mirrored tunnel decorated with patterns seen in objects used by the indigenous ethnic group. When a light is shone from one side, it casts the illusion of infinite space where the motifs are continuously repeated, similar to a kaleidoscope.

“We spent a day with the Temuan at Kampung Serendah, to get to know their culture,” said Jong. “We discovered that there are a lot of patterns and motifs found in their fruit baskets, huts, crafts and kerchang, a traditional game of theirs.”

She added that the choice of technique -- using lights and reflection -- in creating Re-Vision was to attract the younger generation, so that they would learn more about the Temuan ethnicity.

“We hope that this will make them curious about Temuan community and appreciate their culture,” said Jong.

Chua said in view of the success of Tukang, Tourism Selangor planned to integrate the crafts as part of tourism products. “Tourists looking for souvenirs to bring home often ask for something more special, like crafts that represent Selangor.

“Here, the six winners have showcased different interpretations of Selangor cultures and heritage. “For example, the nine petals of Bunga Tanjung are used in one of the works to represent Selangor’s nine districts. Nursuliana: We wanted to see how craftsmen integrate the heritage of Selangor into their works.

“Smaller craftworks can be turnned into souvenirs for tourists,” she said. As for the bigger installations, she added that they could be placed in thoughtfully selected spots in Selangor and made a place of interest.

The Statistics Department’s (DOSM) Domestic Tourism Survey found that Selangor was the state most visited by domestic tourists in 2021, which accounted for 10.2 million visitors. This is followed by the Federal Territories of Kuala Lumpur and Sarawak, which recorded 9.1 million and 6.5 million domestic visitors respectively. “We were approached by a lot of vendors, mostly craftsmen, to include their products in Selangor’s tourism programmes, and we were able to do that through Tukang. “Handicrafts like mengkuang mats and rattan baskets by the Mah Meri Orang Asli tribe are suitable to be made into souvenirs.

“It can be a profitable product and at the same time, we can promote tourism in Selangor,” he added.

Visitors to the exhibition during the weekend can also try their hand at making some of the crafts. Jong said FabCafe KL, which she co-founded with Ignatius, would be conducting a workshop for visitors to learn how to make a smaller version of the mirror tunnel in the Re-Vision installation.

“Participants can paint their own patterns and fit the tunnel with coloured LEDs.

They can then take their handicraft home as a souvenir,” she said. Among the other winners of the Tukang festival whose works are exhibited is the designing trio of Arief Afandi, Hanisah Nordin and Balqis Tajalli. Their Tepak Ulam handmade piece is inspired by ulam, a Malay salad.

“The intention of Tepak Ulam is to celebrate the philosophy of “slow living”, in contrast to the fast-paced world where we often forget the hard work that goes into preparing food. “Tepak Ulam consists of three stackable components -- the ceramic containers, a wooden plate and the fabric which acts as a saprah or a cloth for the base.

“The fabric base incorporates cyanotype (a ultraviolet light-sensitive printing process) prints while the tepak is made of nyatoh wood.

“Together, these are the things that one will find in a traditional Malay dining scene,” Balqis said, adding that there were small whimsical prints of the Bunga Tanjung in the ceramic containers. It is the official flower of Selangor. Additionally, Arief said the idea of the stackable components gave greater flexibility in its design where the owners could be their own tukang or craftsman. Balqis flanked by Arief and Hanisah showing the Tepak Ulam, which consists of a base cloth, ceramic containers and a wooden plate.

“If you put flowers into the ceramic, then it becomes a flower pot. If you remove the ceramic containers, the wooden plate can be used for other things,” he highlighted.

Another installation, the Mok Pod is inspired by “rumah ibu”, a term used to describe the main spaces within a Malay house. It adopts the tanggam or the tongue and groove, a technique popular in the Nusantara that allows builders to assemble a house without nails.

“Instead of covering up the entire house, Mok Pod serves as an exoskeleton that highlights the beauty of tanggam which made up the whole building,” said Zul Fadzly Mohd Salleh. He crafted the Mok Pod with Nor Azrina Lasa and Yezreen Mohamed Yusof. “We included batik prints that incorporate the nine petals of Bunga Tanjung to represent the nine districts of Selangor,” he elaborated.

The remaining three winning works were “A Piece of Kampung” by Leon Leong and Hani Ali, “Sustainable Innovation Batik Alternative Tool” by Ecovs and “T.I.K.A.R.” by Inside RG.

The festival, ending on Nov 27, also showcases art workshops, design talks, pop-up art, a craft bazaar and music performances Shah Alam Gallery is in Persiaran Tasik, Section 14, Shah Alam. Admission to the Tukang festival is free. Those keen to join the block batik workshop from 2pm - 4pm have to pay RM25 per person. Other workshops are free. 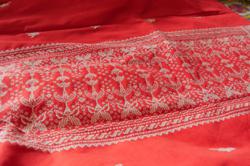