TWENTY-FIVE per cent of the land at the Bukit Dinding site in Wangsa Maju, Kuala Lumpur that has been earmarked for high-rise development must be kept as a green area to protect against landslides, says Datuk Seri Mahadi Che Ngah.

The Kuala Lumpur Mayor said this is higher compared to other developments (that require only 5%) because of the area's steep slopes.

"As of now, no work can take place as engagement sessions with locals are still being conducted," he said when met at Menara DBKL 1 in Jalan Raja Laut on Monday (Sept 26).

The Bukit Dinding issue gained attention after a group of Setiawangsa and Wangsa Maju residents opposed the project.

They raised concerns that the planned development could cause landslides, especially with higher rainfall in recent years.

The site, which is privately owned, is also a popular hiking spot for nearby residents.

Kuala Lumpur City Hall (DBKL), in a response statement to residents on Sept 22, said no work would take place until engagement with the developer is finalised.

No dates were given for the order but one session had been held so far with more being planned.

Mahadi also said the project had fulfilled several legal requirements such as an environmental impact assessment and a soil integrity study.

He noted that the Environment Department issued its approval for the environmental assessment in 2017.

He added that in 2014, consultant Malaysian Institute of Public Works (Ikram) had issued its recommendations to the developer.

This included ensuring the provision of drainage and water catchment areas to protect the site's soil integrity.

"The developer will also need to carry out soil stabilisation works and build berms to strengthen the landscape," added Mahadi. 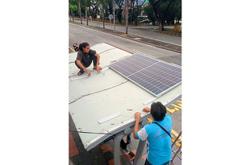