Tan Eng Kok with the two racing bicycles which he is only willing to sell if the price is right. - THOMAS YONG/The Star

TAN Eng Kok decided to stop selling household electrical appliances after a decade, as it was no longer sustainable.

His shop in Bandar Uda Utama, Johor Baru, which operated from 1990 to 2000, also used to offer electrical repair services.

“A small business like mine could not compete with larger electrical and electronics retailers offering flexi payment schemes,” said the 54-year-old when interviewed at his workshop in Pulai light industrial estate.

After his electrical business closed, Tan worked with his cousin Lai Yak Wan, who ran a business in Taman Johor importing used car parts and components from Japan.

“It was something new for me, from repairing used electrical appliances to dealing with car parts and components,” he recalled.

In 2004, Tan set up a new business, importing used bicycles from Japan. Tan attending to a customer at his workshop in Johor Baru.

His company, Ichiban Marketing Sdn Bhd, brought in the used city bicycles from Fukuoka and Tokyo, which his only worker Poon Wei Ming, 46, would repair and restore for the local market.

“I had no experience repairing bicycles. I took a gamble when starting this business,” he recounted.

He said initially, it was more trial and error for him and Poon. However, the duo went on to gain enough experience and skills over the years.

“Instead of depending on a third party, I dealt directly with a Japanese company to bring in used bicycles for the local market,” said Tan.

“The Grade C bicycles, which are beyond repair and more than five years old are considered scrap metal,” he explained.

He imported around 500 Grade B city bicycles and after repairing and restoring work, they were sold for between RM250 and RM450 each.

The company also sold folding bikes for between RM290 and RM1,000 each, besides high-end racing bicycles and mountain bikes which cost RM3,000 and above each.

“Most of my customers would buy city bikes for leisure and recreational activities,” Tan said, highlighting that he also sold bicycles for children and senior citizens.

He said some factories would buy the restored bicycles in bulk for their foreign workers.

Seafront resort operators and owners of prawn farms were also among his customers as the bicycles were saltwater-resistant. 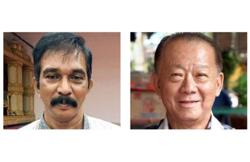