The fight to save the turtles

Concerned locals: According to the Kampung Penyu community group, fewer turtles are nesting on the shores of Teluk Ketapang in Pangkor. — RONNIE CHIN/The Star

Community group wants to resume stewardship of the Teluk Ketapang conservation site in Pangkor that is now under the Perak Fisheries Dept.

LOCAL communities and environmental groups are concerned about the dwindling number of turtle landings at the Teluk Ketapang Turtle Conservation and Information Centre on Pangkor Island.

Society of Environmental Activists (Kuasa) community officer Nizam Rahman said the number of nests had declined steeply since the conservation centre was taken over by the Perak Fisheries Department in 2021.

Nizam said 37 nests were recorded in 2020 and there were only five so far this year.

“A group consisting of locals who called themselves ‘Kampung Penyu’ had in 2017 found 19 nests there.

“They then started to look after the area and established the centre, until they got an eviction notice from the department in 2021,” he told StarMetro.“The group had not only ensured the safety of the turtles and their nests, they also provided fresh food for the reptiles and educated the people about them,” he added. A permanent building for the turtle conservation centre is being built in Pangkor. — Photos: RONNIE CHIN/The Star

Nizam said based on their observations, some concrete structures were being built near the landing site and Kuasa believed those structures led to a drop in landings.

“We feel that there should not be any permanent structures in such a sensitive area as it could affect the number of turtles coming to the beach.

“I think it is already happening.

“We hope that the department is aware of the situation and will be willing to work with the community for the sake of the turtles,” he added.

Razman said the structures were for an educational gallery to increase awareness of turtles. Azrul says the group is willing to work with the department for free.

The conservation centre had in April 2021 received a notice from the state Fisheries Department, to cease operation for not having a permit to keep the turtles.

The centre was then placed under the management of the department.

In 2021, a 400m area of the site was designated for the setting up of a conservation and information centre.

About RM3mil in allocations were also said to have been set aside to develop the place between 2021 and 2025.

Perak Fisheries Department director Noraishah Hashim said the department had been managing the conservation centre since October 2020 after receiving an approval letter from the Manjung District and Land Office.

“The centre was set up by an individual who showcased the turtles and charged visitors to see it.

“The department had advised the individual to hand in all the turtles under his supervision since it is not allowed,” she said, adding that the turtles had since been released.

“Turtles are categorised under the International Union for Conservation of Nature (IUCN) Red List, which indicates they are at high risk of global extinction.

“IUCN is against wild animal captivity for exhibitions and showcases, including circuses,” said Noraishah. 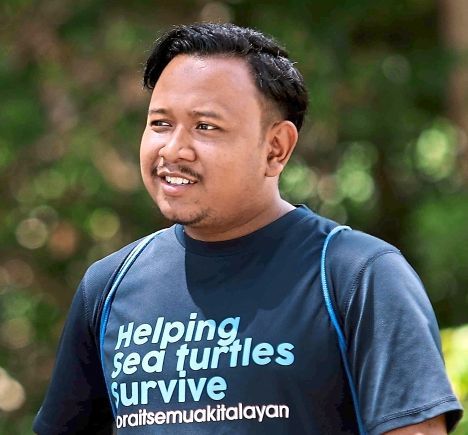 Nizam says the number of turtle nests have declined steeply since the conservation centre was taken over by the Perak Fisheries Department in 2021.

She revealed that about 460 turtle eggs had been collected and 259 hatchlings released from January to June this year.

“The department has the responsibility to ensure the safety of the animals.

“We also have the expertise to keep the endangered animal for research purposes,” she added.

Noraishah said discussions were ongoing with Manjung Municipal Council to further promote the conservation centre as a tourist destination.

“Our department will handle the technical part of the project. Rasli says local fishermen had been providing fresh food for the turtles.

“The community can help raise awareness of turtle conservation in Perak, as well as lodge complaints.

“The conservation centre will be the second one in Perak after the Segari Turtle Sanctuary.

“We hope that the public will give us some time to set up the centre properly,” she added.

Nizam said the Kampung Penyu group was willing to share information with the Fisheries Department.

“The group had initially wanted to set up the place as a tourism and research centre so that people from all over the world could come and visit the place, subsequently boosting the local economy.

“It is willing to share data and also manage the place for the department.

“It is not easy to get a group of people that have the same passion as Kampung Penyu in conservation.

“The Fisheries Department could collaborate with the group,” he suggested, adding that they hope to see more green sea turtles and Olive Ridley turtles returning to the beach.

Rasli Ibrahim, who established the centre and founded Kampung Penyu, hoped that their hard work and efforts would not go to waste.

“I had consulted experts and researchers on how to take care of the turtles and we were also supported by local fishermen who would provide fresh food for the turtles,” said the 66-year-old.

“We helped build this place with our own funds. A trail left by nesting turtles at Teluk Ketapang being measured.

“Turtles are such sensitive animals that require a lot of attention

“I was really sad to learn there were only five nests this year,” said Rasli.

Kampung Penyu field officer Muhd Azrul Hafiq Rasli said they were willing to work with the department for free.

“Our concern is the safety of the turtles.

“Since the department has fenced up the area, there is no one to monitor the place at night, when turtles usually come to the beach to lay their eggs.

“In fact, we have lodged two police reports about turtle eggs being stolen there before.

“We even confronted the thief and when we asked him to stop, he questioned our authority,” he said.

“Back when we were managing the place, we had volunteers and our staff would be at the centre all the time because we were worried about the turtles. The turtle conservation and information centre is now managed by the state Fisheries Department.

“We understand that the department may be understaffed, so we are offering our services for free for the sake of the turtles,” Azrul added.

Businessman Beh Hong Gi, 40, hoped that the local community would be given a chance to take care of the new centre.

“I managed to join Rasli and his friends to clean up the beach several times. It is important to make sure the place where turtles lay eggs is clean.

“It made me happy to know that I was able to contribute and help the turtles.

“The Chinese community used to call Teluk Ketapang ‘Turtle Bay’ because the area is a natural habitat for turtles.

“As someone who grew up on the island, I was glad to hear we had people in our community taking care of the turtles,” added Beh.

“I am a tourist guide in Pangkor and my goal is to get people to stay on the island for at least three days and two nights or even longer, as it will benefit the local economy.

“Before this, when tourists asked about places to visit in Pangkor, I would recommend the conservation centre since it was a unique attraction.

“But now we cannot go there anymore as the place is under construction,” he said, adding that tourists often asked him about the place.

“When Rasli was still running the place, he often posted updates on social media to keep people informed of what was going on.

“Now that it is under the Fisheries Department, we have no idea what they plan to do with it,” said Musa.