Natural protection: An aerial view of a mangrove forest in the northern part of Seberang Prai that protects the coastline. — Filepic

PENANG has been ramping up its tree-planting initiatives in line with the state government’s mission to preserve forest areas.

And while it has been quite successful in planting tree saplings, mangrove forest replanting – which is vital to protect coastal areas rich with biodiversity – is proceeding at a much slower pace.

Penang Island City Council (MBPP) Landscape Department director Azizul Fahmi Muhamad said that as of April this year, a total of 103,951 trees had been planted across Penang island since 2008.

On Penang mainland, Seberang Prai City Council (MBSP) had planted 272,500 trees from 1990 to May this year, according to its secretary Baderul Amin Abdul Hamid.

“Over the past four years, we have planted 39,590 trees in several areas in Seberang Prai,” he said.

Penang local government, housing, town and country planning committee chairman Jagdeep Singh Deo had reportedly said that hopefully by 2023, the state could plant 200,000 trees and reach its target of 500,000 trees by 2030.

However, while the general tree-planting initiatives are barrelling forward, the state government has not set any real targets for mangrove replanting.

According to MBPP, only 7,000 mangrove tree saplings were replanted from 2020 to May this year.

Azizul Fahmi admitted that MBPP had not set a target to plant new mangrove trees but stressed that efforts would continue in preserving the environment.

“We see the need to have more mangrove trees on the island. “Mangrove forests protect the coastline from storms, erosion and tsunamis, create new habitats for marine life such as fish, crabs, shellfish and other species, and encourage biodiversity.

“They help preserve the marine ecosystem,” he added.

One reason for the slower pace of replanting is because of the nature of the mangrove plant.

Baderul pointed out that planting mangroves was not as simple as planting other trees.

He said mangrove tree-planting needed to be carried out in suitable locations. “The Forestry Department will provide technical input on this matter.

Increasing the size of mangrove forests in Penang is part of the state government’s policy.

This is especially timely as Penang’s mangrove forests had decreased from 1,967ha in 2017 to 1,050ha in 2020, according to Forest Research Institute Malaysia’s (FRIM) Status of Mangroves in Malaysia report that was published in 2020.

The threats to mangroves come from the extension of usable areas for settlements, agriculture and aquaculture. Phee says the gazetting process of the ZIA as a permanent forest reserve is at the final stage.

He said currently, only about 381ha of forested wetlands in Penang – 166.38ha in Balik Pulau and 214.66ha in Byram, Nibong Tebal – are protected as permanent forest reserves in the entire state.

He noted that the latest area to be included under the state’s permanent forest reserves was 161.8ha of aquaculture industrial zone (ZIA) in Penaga.

“The gazetting process of the ZIA is currently at the final stage,” he said after attending the recent Penang Hill Biosphere Reserve (PHBR) Management Plan Workshop.

To show their support for Mother Earth, various parties have come forward with their own green initiatives to increase the number of mangroves in the state.

Among them is multinational company Flex Penang, where some 100 of its employees participated in a Cycling and Mangrove Planting Programme 2022.

From as early as 7am, the participants were ready with their bicycles at Pantai Ban Pecah to cycle 10km along the Straits of Malacca, where they had also carried out a plogging event to clean up the beach.

After the cycling event, participants were brought to Mangrove Forest Education Centre in Sungai Acheh, which is about 15km from Pantai Ban Pecah, for a mangrove-planting session. One of the participants, Angeline Maickle, 47, said it was both an interesting and healthy programme.

“The plogging event during the cycling activity and mangrove-planting programme is a good way to contribute to the environment.

“They also serve to benefit our future generation,” said the mother of three, who works as a trainer.

Another participant, government liaison executive Nur Aiezzah Atira Mohd Yusoff, 29, said the programme was excellent exposure for employees who were normally busy with their daily work at the factory.

The programme was carried out in collaboration with the Penang Environment Department (DOE), state Forestry Department and Penang Inshore Fisherman Welfare Association (Pifwa).

Ng added that the programme was held not only to commemorate World Environment Day but also to mark World Biodiversity Day and the International Day for the Conservation of the Mangrove Ecosystem.

Penang Forestry Department deputy director Tengku Mohd Ridzuan Tengku Ibrahim said the mangrove trees that were planted during the programme could be included in Malaysia’s 100 Million Tree-Planting Campaign 2021-2025 as well, through its website www.100jutapokok.gov.my

“Since 1997, we have planted some 300,000 mangrove trees, but almost half of them had to make way for development.

“Now, we have only about 150,000 mangrove trees in Sungai Acheh and its surrounding areas in Balik Pulau.

“More effort is needed from all of us to protect them,” he said. 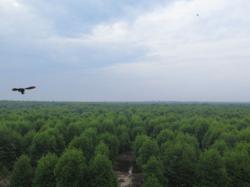