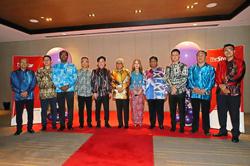 EARLY last month, some 500 mangrove trees were planted at Mangrove Forest Education Centre in Sungai Acheh, Penang, during the launch of the Environmentally Concerned Youth Initiative.

The event, which was launched by Deputy Environment and Water Minister Datuk Mansor Othman, was organised by Malaysian Green Technology and Climate Change Corporation (MGTC) and Kelab Belia Prihatin Malaysia.

A total of 235 youths, including Universiti Sains Malaysia graduates as well as residents and the fishing community of Nibong Tebal took part in the initiative.

“The public’s continued involvement in this initiative can further raise awareness and make a positive impact on this campaign on climate change and global warming,” said Mansor in his Facebook post.

“I would like to express my deep appreciation to Kelab Belia Prihatin Malaysia and the youths from all over the country for making the programme a success.

“Such noble initiatives are in line with the ministry’s aspirations.

“I call on youths to continue playing an important role in ensuring the sustainability of the environment for future generations,” he said.

The initiative was launched in conjunction with this year’s World Environment Day to spread awareness of the importance, benefits and unique ecosystem of Malaysian mangrove forests that function as a natural fortress against beach erosion and an efficient carbon-absorbing agent.

Its delicate ecosystem protects the shorelines from tsunami and acts as a natural filter against water-borne pollutants.

Besides serving as a biodiversity hotspot and habitat for fish, shellfish and migratory birds, the trees also provide more greenery to fight climate change. — By IMRAN HILMY 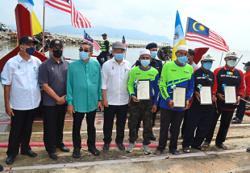