Turning up the heat to save derelict hot springs

BEFORE activities like whitewater rafting and jungle trekking in Kampung Ulu Slim, the village in Perak already had a popular tourist attraction – the Ulu Slim Hot Springs.

Located about 17km from Slim River town under the Tanjung Malim District Council (MDTM), the natural hot springs were once a favourite among folk wanting a short getaway. 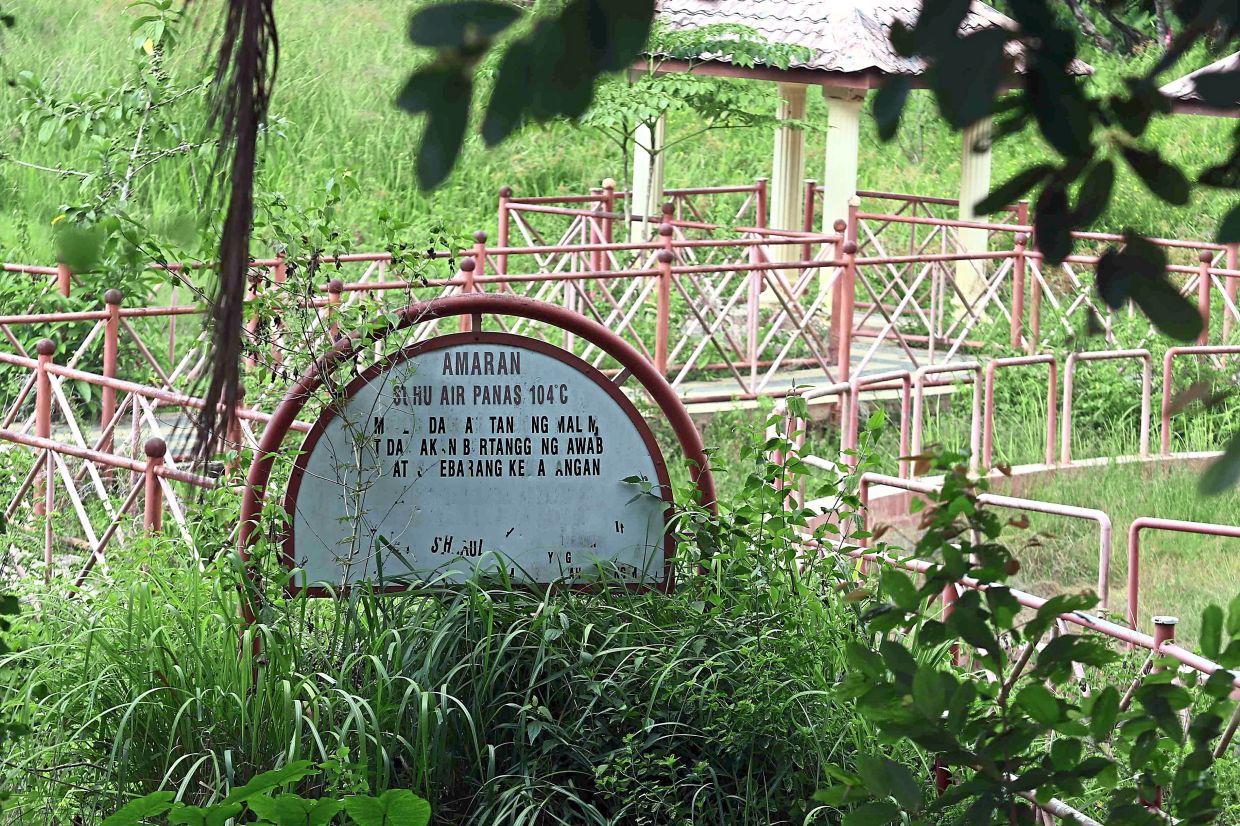 The water from the hot springs is said to be so hot – 104 degrees Celsius – that you can easily boil eggs in it.

But the hot springs now look abandoned with broken facilities and the site is surrounded by undergrowth despite the fact that MDTM, which manages the hot springs, continues to advertise the attraction on its website.

The reality is a far cry from the pictures shown on the website, as it is in a derelict state now.

A site visit by StarMetro found that the cement structures surrounding the main pool had cracked, the pavilion roofs were damaged and walkways broken.

Kampung Ulu Slim resident Mat Rasli Mat Zin, 54, said MDTM should consider not only fixing the hot springs, they should upgrade it. 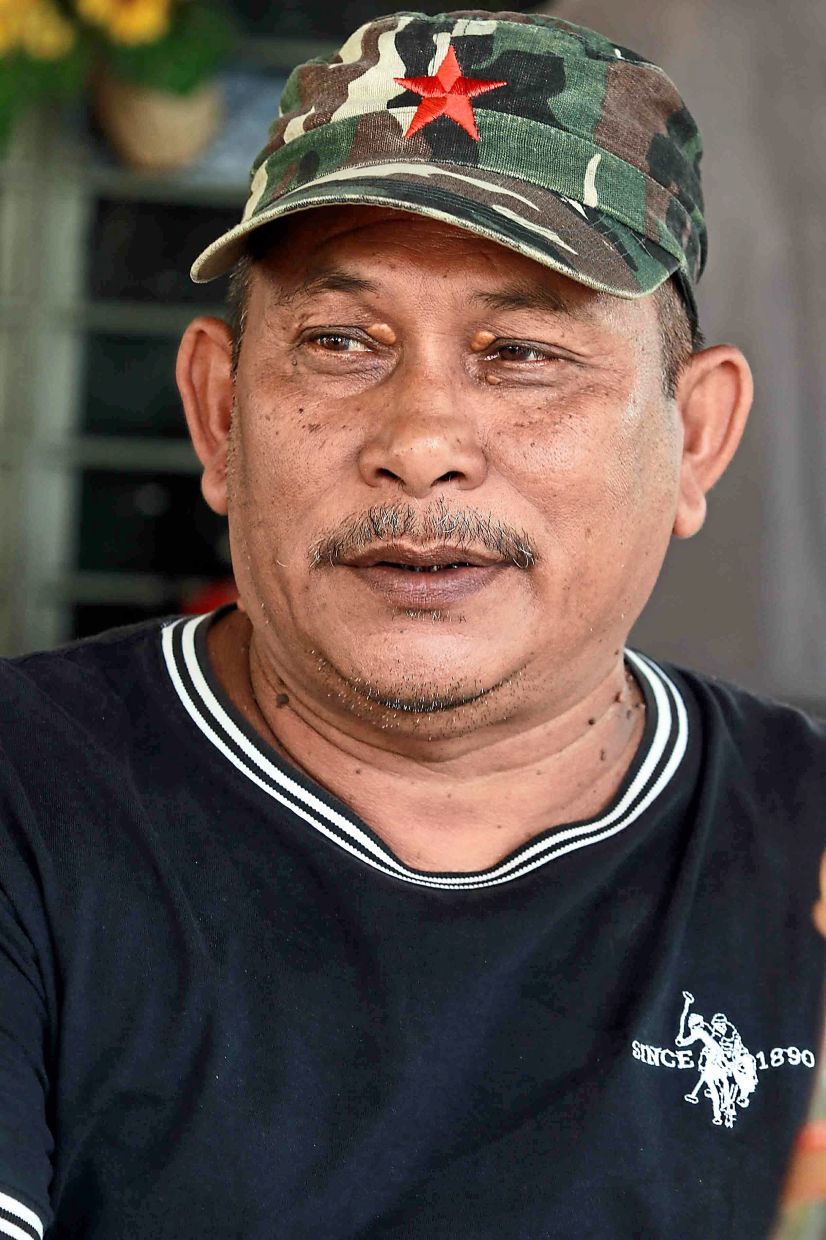 “The walkways and pool are in a bad condition.

“Villagers try their best to maintain the area but we don’t have the resources or equipment,” he said.

“This place is in dire need of a facelift,” he added.

Mat Rasli, a survival skills trainer, said there was no proper fencing around the hot springs and there had been incidents of people falling into the pools.

“The pools are located a stone’s throw from the road.

“The water in the pool is so hot that it can be extremely dangerous if someone falls in.

“I hope the hot springs can be upgraded with better and stronger materials.

“The cement structure of the pool has also cracked and water is spilling out.

“The water level is barely up to my feet now,” he added.

Mat Rasli said some private companies had expressed an interest to take over the hot springs.

“We were not in favour as they wanted to impose an entry fee on everyone, including villagers here.

“I think this is unfair as the place has always been free.

“Locals like me have been coming here since we were little.

“The hot springs have a lot of potential to become a top tourist destination.

“It is sad to see its current condition,” he said.

The local council’s website mentions several facilities such as resting areas with roofs, a pedestrian walkway and a place for visitors to boil eggs at the hot springs.

It notes that the hot springs are often visited by those trekking across the Titiwangsa Range from Raub, Pahang. 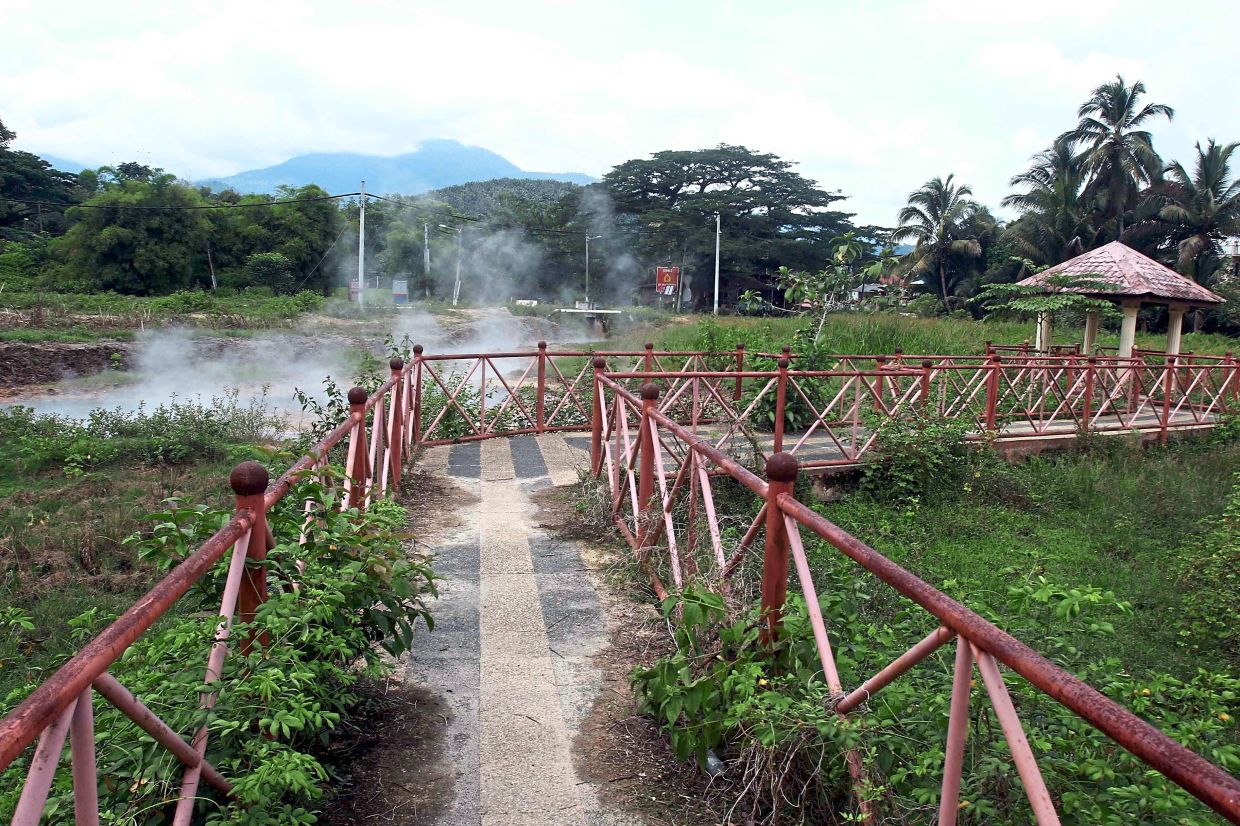 The walkway and other facilities at Ulu Slim Hot Springs in Tanjung Malim are in poor condition. — Photos: RONNIE CHIN and ILI AQILAH/The STAR

Plans go up in smoke

Plans to redevelop the place into a tourist spot are not new.

As far back as Jan 25, 1997, then Perak mentri besar Tan Sri Ramli Ngah Talib had said it could be turned into a holiday spa resort.

He had said the Ulu Slim Hot Springs was one of the biggest among the 15 found in the state, spouting about 27 litres of hot water per second from the ground.

Ramli said that about 400ha of government land surrounding the hot springs could be developed to include a hotel and a golf course.

On Aug 3, 2000, then mentri besar Datuk Seri Mohd Tajol Rosli Ghazali repeated that the state government planned to develop the hot springs in Ulu Slim as it had great tourism potential.

He even said the water at Ulu Slim was the hottest in the country.

“We are looking into channelling the water into hotel rooms or chalets,” he said. 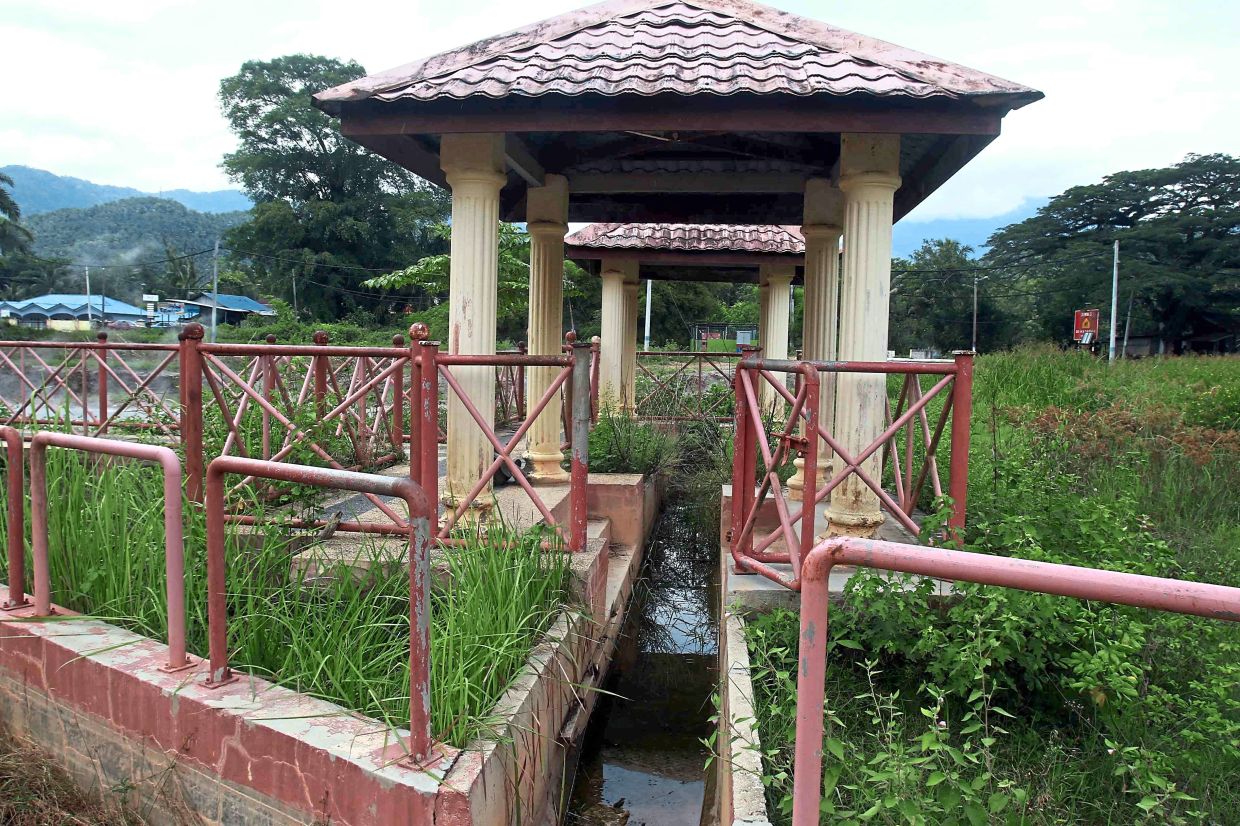 The pavilions at the hot springs in Kampung Ulu Slim are in a state of disrepair.

On July 25, 2001, he said the Ulu Slim hot springs and surrounding area would be turned into a national botanical garden, similar to one in Vancouver, Canada.

Mohd Tajol said the state government had approved 400ha of land in the area, which included the hot springs, for the garden.

He had said the project would cost about RM50mil to be carried out by the National Landscape Department under the Housing and Local Government Ministry.

Mohd Tajol estimated that the botanical garden could attract about a million visitors, and said villagers could participate in tourism projects such as providing accommodation.

It was reported that he said work on the garden would start in 2002 with the upgrading of a 17km road from Slim River to Kampung Ulu Slim. 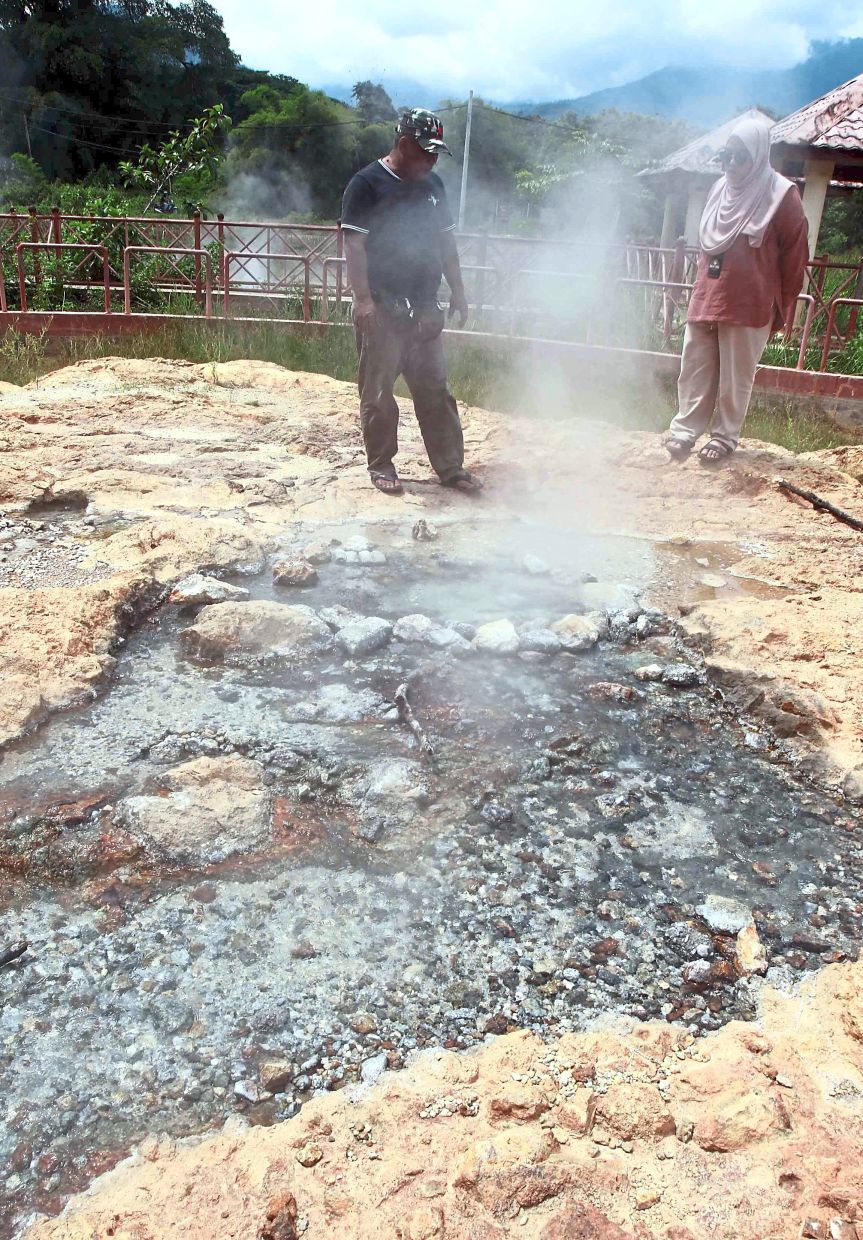 Sulphur smoke can be seen coming out from the hot springs, but the water is shallow as the concrete surrounding the pool is cracked.

Upon completion, the journey from the North-South Highway’s Slim River exit to the garden would take only 15 minutes.

However, the development plans seemed to have fallen by the wayside.

And the place has been neglected until today, 20 years later.

“They have informed me that a master plan to develop the area has been drafted and presented to the Town and Country Planning Department (PLANMalaysia).

“MajuPerak was appointed by Perak State Development Corporation as the developer for the project. The company is in the midst of resolving land ownership and related issues.

“We expect physical work to begin in the fourth quarter of 2023,” she added.

Blend into the environs

“It would be great if they could come to the hot springs too, since there aren’t that many in the country,” said the villager who works as an outdoor facilitator.

“I wish it is as clean, pretty and well-run as the Sungai Klah Hot Springs in Sungkai, Perak.

“It would certainly bring more visitors to our village,” Norhafiz added.

Travel writer Ed Junaidi believes the redevelopment of the hot springs should be carefully thought out.

“The renovation and development, if it happens, should maintain the natural environment. 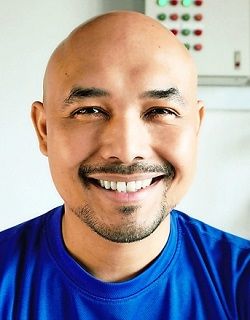 Ed says the hot springs should be made elderly and disabled-friendly.

Ed said the Ulu Slim Hot Springs would become a more popular tourist attraction if a boardwalk, tree house and viewing towers could be built.

“Any additions should blend in with the natural environment and wood should be used instead of concrete and steel, as is the case with many such places now.

“They should learn from the development of Emerald Pool in Krabi, Thailand,” he suggested.

An IT engineer who wished to be known only as Alex, recalled the fond memories he had of the hot springs as a young boy.

“When I was small, my father used to bring me to Ulu Slim and explained how the water became hot.

“The hot springs have such great potential, not only as a recreational facility but also for research purposes.”

He said that as a tourist, he would not mind paying to use the hot springs.

“If the state can upgrade the facilities and add more attractions, I am sure it will be a success.

“They can also set up a plant nursery or petting zoo.

“There will be a spillover effect for the villagers as they can set up stalls selling souvenirs and food,” he added. 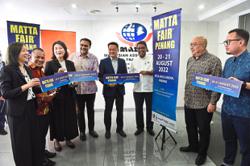