JOHOR has outlined six core strategies as the administration’s backbone towards realising its vision for a developed state.

Good governance, he said, was key to ensuring efficiency and effectiveness of the administration.

“The people have placed high hopes on the elected government.

“They demand efficiency, transparency, accountability and integrity from every layer of leadership, be it political leaders or civil servants.

“Bureaucracy and red tape long associated with the civil service must be addressed and eliminated, especially with regard to potential investors in Johor,” he said at his maiden meeting with civil servants, non-governmental organisations and community leaders at the Persada International Convention Centre in Johor Baru.

He urged government heads to go to the ground to understand people’s problems and put themselves in their shoes to find a solution fast.

On economic development, he said efforts must be made to attract quality investments to generate high-paying jobs.

Onn Hafiz also intended to make Johor a fair state by continuing to help those in need regardless of race, religion, descent or rank, especially the B40 and M40 groups.

“Almost 150,000 individuals are assisted every year through the Welfare Department and Johor Islamic Religious Council (MAINJ).

“To remove them from this bracket, the government will continue to mobilise relevant agencies to formulate programmes and channel appropriate assistance.”

He said Johor could not be seen as a developed state if basic infrastructure needs were unavailable.

Onn Hafiz also said that the Federal Government would be urged to approve applications for additional lanes from Yong Peng North to North Senai along the North-South Expressway, widening the Senai-Desaru Expressway and repairing major roads in Johor.

“The state has appointed road concessionaires to ensure repairs are carried out fast and efficiently.

The ‘zero pothole’ programme, he said, would be strengthened with every complaint attended to as issues and complaints on damaged roads often circulated on social media.

He also said that the Johor Bersih campaign would be launched on July 1.

“Local councils, the Drainage and Irrigation Department, Johor National Parks Corporation and relevant agencies will be given a 100-day key performance indicator to clean up their respective areas,” he said on the campaign.

Emphasis will also be given to the youth by focusing on education, leadership, entrepreneurship, sports and recreation as well as volunteerism, he added.

“These modules are vital to ensure the young generation will be the next capable, competent, resilient and competitive human capital who can face challenges ahead and continue to add value to Johor’s progress,” he said. 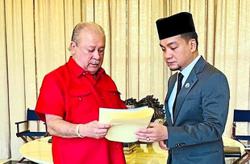