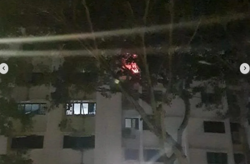 FAMILIES living in the low-cost Seri Berembang walk-up flats at Jalan Berembang, Port Klang, have been told to evacuate after a structural inspection concluded that the building is “structurally unsound”.

Klang Municipal Council (MPK) corporate communications director Norfiza Mahfiz said the decision to order the evacuation was made after consultants were hired to review the structure for initial rectification works due to wide cracks, but on expert advice “it has been deemed an unsafe structure”.

She said it involved 304 units of Block A, B and C from the total of four blocks.

“Consultants had carried out an in-depth study on the soil and the structure over a period of eight months from July 2021 until May 5 this year and concluded that rectification works were not the answer as the building was unsafe.

“Based on the technical reports, a structural assessment of the building and soil stability, the consultants found that Block A, B and C were unsafe and would place the dwellers at risk,” added Norfiza.

She added that the cracks on the walls and sinking of the building were detected in 2008 and notice to evacuate was issued to 16 flat dwellers in Block C in December 2019 and the evacuation of residents was carried out in stages from March 2020.

Norfiza added that the evacuation notices were given out in accordance with the laws under the Street, Drainage and Building Act 1974.

State Housing, Urban Wellbeing and Entrepreneur Development Committee chairman Rodziah Ismail said that based on the consultant’s studies and final report, she had instructed MPK to issue the evacuation notices.

Rodziah who had met the Seri Berembang flat dwellers added that the Selangor Government had allocated an estimated RM12,768,000 where each affected unit is given RM42,000 to be able to rent a new place.

The Seri Berembang Flats is under the Federal Government’s purview.