MPAJ surveyed the flats on June 1 and found 62 cases of illegal extensions, with 58 of them on the ground floor.

SIXTY-TWO notices have been issued to Flat PKNS AU3 owners in Taman Keramat in Ampang Jaya, Selangor, to remove all illegal extensions at their premises within the stipulated period at their own cost.In a statement, Ampang Jaya Municipal Council (MPAJ) public relations officer Norhayati Ahmad said officers from the Building and Architecture and Enforcement departments surveyed six of the 15 blocks also known as Flat UTM on June 1, and found the owners of 62 units in breach of Section 72(1) of the Road, Drainage and Building Act (Act 133).

The enforcement action, she said, was a follow-up to the council’s demolition of an illegal extension under construction in Block 4 on May 25, which garnered much attention after a video of it went viral in social media.

Netizens questioned the basis of enforcing the law solely on one unit when many others had similar extensions built over the years.

Of the 62 units with illegal extensions, Norhayati said 58 units were on the ground floor and four others were on the first floor.

“Among the illegal extensions found were permanent walls, awnings, gates and porches built on government land.

“Renovating existing structures or building additional ones on the side or back of any stratified developments like flats, apartments and condominiums is not allowed,” she reiterated.

MPAJ councillor Anfaal Saari said some 100 affected residents met her on June 13 for support letters to appeal for postponement or exemption from enforcement.

She said the most common reason for the illegal extensions was that their two-room flat was too small.“These flats are a low-cost development built in the 1980s. The six blocks are five storeys high with 320 units,” she said.

Describing the matter as a sticky situation, Anfaal said the residents needed to understand that the illegal extensions had always been against the law although they had gotten away with it for many years.

“The action against this group will be different than the action taken on the unit in Block 4.

“MPAJ received four complaints on the illegal extensions in that unit. Since the extensions were in the early stages of construction, the demolition of the illegal structures could be done without damaging the original structure.

“However, the illegal extensions in the 62 units were put up a long time ago.

“Notices must be given and there is an appeal period too,” she explained.

Anfaal said all the residents’ appeals would be forwarded to MPAJ for consideration. 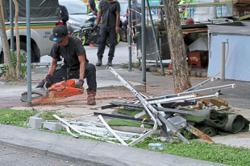