THE Petaling Jaya City Council, if required, will issue compound notices amounting to RM25,000 in the next few days to the infamous Datuk Seri who encroached into public land at Tropicana Indah in Petaling Jaya.

Last Friday (May 20), StarMetro reported that a Datuk Seri from the upmarket neighbourhood had blatantly broken council rules, and disregarded three stop-work orders issued by the council on May 8, 10 and 11 following a slew of official complaints from residents.

“We have to follow the law before we break any illegal structures.

“The council’s building control department under the Street, Drainage and Building Act 1974 has issued a demolition notice for installing air-conditioning compressor at the house gate area as well for erecting illegal structures on May 19.

“The owner has to remove it within 14 days.

“Failing to do so, the council will issue a notice for the owner to vacate the land,” he said.

It was earlier reported that the Datuk Seri has caused the residents in Tropicana Indah in Petaling Jaya to be furious over the blatant disregard for the law.

He has riled up his neighbours and the management after he ignored stop-work orders from MBPJ after allegedly digging up a road shoulder.

The council’s enforcement officials had also turned up thrice at the neighbourhood to investigate following the protests.

The road shoulder, which is located next to the residents’ entrance, was found damaged by the owner.

But on May 14, following alerts from readers, StarMetro found that the owner had patched up the road shoulder.

The owner has also planted palm trees and shrubs on the road shoulder but it is not known if he had obtained MBPJ approval.

"Ultimately, the council will not hesitate to bring the homeowner to court if all our notices are ignored," said an MBPJ spokesperson.

The controversy started when the owner started to dig up the road shoulder, where residents claimed the works were carried out to put shrubs and plants to conceal the air-conditioning compressors and water tanks he had put up.

Residents said they would continue to object if any MBPJ approval is given "in the name of landscaping and beautification." 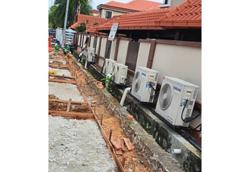