(Far left) A cracked and unstable wall of a house in Taman Buana Perdana, PJS3.

RATE residents of PJS3 are fuming over Petaling Jaya City Council’s (MBPJ) lack of urgency to address drainage-related problems in their neighbourhoods after three meetings with the local authority.

During a meeting with MBPJ in early April, the residents from Taman Buana Perdana and Taman Medan said they would stage a picket if the city council did not look into their requests.

The residents are still reeling from the major flash floods that took place last Dec 18 and March 7, which they believe is linked to poor drainage in the area.

ALSO READ: Pj Folk blame floods on clogged drains due to nearby development

They claimed that two ongoing construction projects were compounding the problem as the drains in the area were mud-filled.

One construction involves a mixed development project that includes a 44-storey condominium on a 20ha site, while the other is a residential project to build three-storey houses.

“MBPJ said it would initiate a meeting with the developers but it never took place.

“The last meeting at MBPJ was chaired by its Engineering Department head, attended by one of the project developers and representatives from Taman Medan and Taman Buana Perdana.

“We highlighted the problems repeatedly and the department head assured that follow-up work to clear the drains would be carried out.“MBPJ’s waste contractors are supposed to clear the drains in PJS3 but debris and silt are still clogging the drains in Jalan Medan 11,” said Taman Buana Perdana Residents Association committee member P. Naveen.

He recently sent a message to Petaling Jaya mayor Mohamad Azhan Md Amir on taking the issue of clogged drains seriously before it got worse.

“The mayor replied that action would be taken and asked us residents to help MBPJ carry out a gotong-royong.

“Why should we do the city council’s job? MBPJ should engage its contractors to clean up the area!” said Naveen, adding that it was a nightmare for residents each time it rained.

A Taman Medan resident, who declined to be named, told StarMetro that his housing estate was adjacent to Taman Buana Perdana.

“My family has lived in Taman Medan since the 1960s.

“There was a disused mining pool in Taman Buana Perdana back in the 1960s.

“The first single-storey houses were built there in the 1980s.

“The mining pool was closed and became a landfill in early 2000.

“The are more problems than just floods,” he said.

The resident said they wanted MBPJ to reimburse them for losses incurred as a result of the floods.

“During the Dec 18 flood, most households suffered a minimum of RM30,000 in losses.

“I had to buy new sofas after the December floods, and it flooded again in March.

“I still have not finished paying my credit card bills for that!” he added.

Naveen said his car was a complete write-off after the December floods.

Another Taman Medan resident, who wanted to be known only as Kumar, supported the suggestion for an independent study on the soil movement in the neighbourhood.Meanwhile, Naveen said MBPJ should implement a KPI system to keep tabs on work it had promised to do.

“We are tired of pushing the authorities to do their job,” he said.

At press time, MBPJ could not be reached for comments. 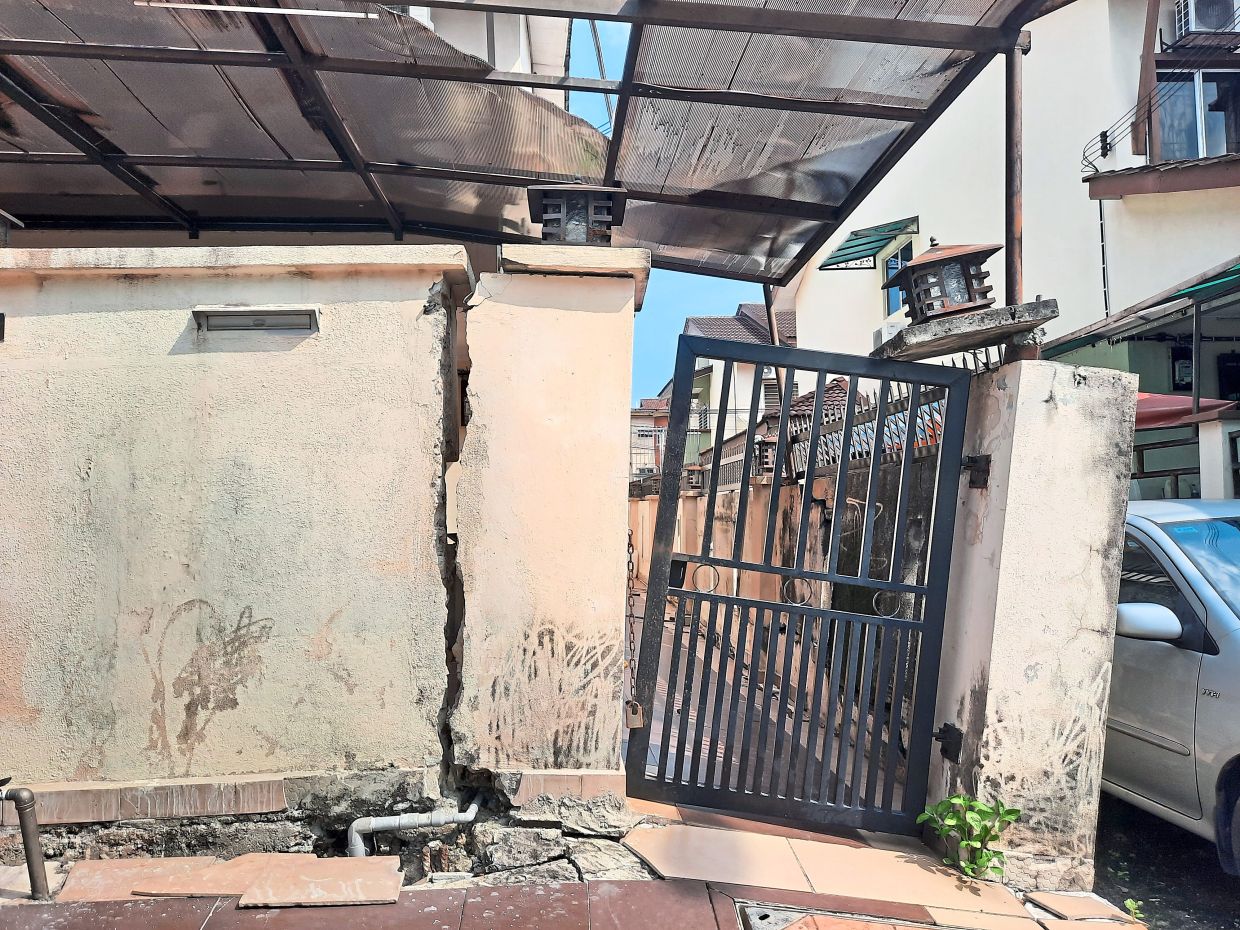 (Far left) A cracked and unstable wall of a house in Taman Buana Perdana, PJS3.

Residents of Taman Buana Perdana want MBPJ’s contractors to clean the clogged drains which are contributing to flash floods.