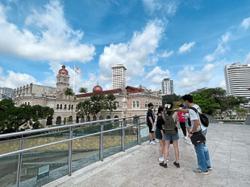 THE Subang Jaya City Council (MBSJ) has sent its Emergency Response Team (Pantas) to attend to reports of floods and landslides at several areas under its purview following Monday (March 7) afternoon’s downpour.

The Pantas squad was deployed to those areas to investigate and render assistance.

User @suzuki1412 tweeted at about 4.30pm that the USJ/Subang Jaya stretch towards Sri Petaling and Kuala Lumpur was flooded, and advised motorists to avoid it.

@LLMinfotrafik tweeted that only selected lanes at the Awan Besar Toll Plaza were accessible, while KM48.8 east-bound (Kinrara to Awan Besar direction) was completely blocked.