SP7 Taman Saujana Puchong residents are objecting to the construction of a telecommunications tower near a children’s playground and badminton court.

RESIDENTS of SP7 Taman Saujana Puchong, Selangor, are against the construction of a telecommunications tower within their Puchong neighbourhood, citing safety and approval concerns.

“This transmission tower is located in Jalan SP 7/3, near a children’s playground and badminton court,” said SP7 resident A. Nathan.

“We are concerned about the safety of children and other users of these recreational facilities.

“Furthermore, there are no signboards and no indication if the project is approved by the local council,” he added.

“Residents were caught unawares since there was no notice or information on the structure,” said Nathan.

“We subsequently sent letters to Subang Jaya City Council (MBSJ) and elected representatives’ offices to express our objection to the structure and call for it to be removed.”

He said residents also wanted MBSJ to take action against the contractor for illegally building the structure, as residents later found out that the contractor had carried out construction work without MBSJ’s approval.

When contacted, MBSJ said construction work at the site was halted and a fine issued after checks revealed that the structure was built without a council permit.

“MBSJ received a complaint on the construction of a telecommunications structure on Dec 23 in SP7 Taman Saujana Puchong and made a site visit to investigate the matter on Dec 28.

“Upon inspection, the structure was found to be built without approval from the council,” said MBSJ Corporate and Strategic Management Department deputy director Azfarizal Abdul Rashid in a statement.

“The telecommunications company was issued a building notification notice and instructed to submit a permit application to MBSJ’s Building Department.

“The structure was sealed off.

“The company and its contractor were also instructed to immediately stop work at the site.

“In addition, a compound of RM25,000 was issued under Section 70 (13)(c) of the Street, Drainage and Building Act 1974 and handed over to the structure’s owner,” said Azfarizal.

He added that MBSJ would continue carrying out periodic monitoring to ensure structures were not illegally built in MBSJ’s jurisdiction. 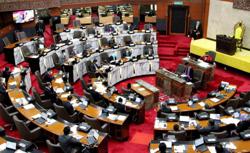