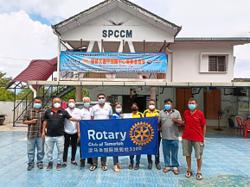 Temerloh Rotary Club office bearers and members distributing the mattresses to the affected residents in Mentakab.

SOME 1,000 residents in four housing areas in Mentakab, Pahang, that were badly affected by the massive floods last month received another round of aid, courtesy of non-governmental organisations.

Temerloh Rotary Club public relations director Datuk Seiko Chew Kim Pong said they sent out an SOS to their counterparts around the country shortly after the flood- waters receded.

“Within days, we received many calls offering to sponsor various items to help the affected families.

“With the assistance of several Rotary Clubs including Rotary Club of Petaling Jaya, we were able to gather enough mattresses to be distributed to the affected residents,” he said when contacted.

Chew said that earlier, members of Rotary Satellite Club of KLCC-Kuantan Mandarin drove all the way from Kuala Lumpur to give out over 420 rice cookers and gas stoves as well as face masks.

Separately, Temerloh Rotary Club vice-president Datuk Hiang A Li thanked their counterparts from the Klang Valley for their prompt assistance.

Hiang said that besides donating items, club members also volunteered their time and resources to help in cleaning-up activities.

“We appreciate all the help given in line with the Rotary spirit to serve the community in times of need,” he said, adding that the most urgently needed items were household and electrical appliances.

Many of these items were damaged in the floods.

Hiang added that they hoped to help the victims rebuild their homes and overcome difficulties as soon as possible with their collective strength.