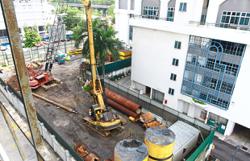 In a tight spot: Adjacent condominium residents fear for their safety and their homes once the project for the office tower kicks off.

OCCUPANTS of condominium units on Jalan Scott, Brickfields are riled up over a 38-storey office block that is coming up on a small piece of land in their neighbourhood.

The residents claim that the land is not suitable for such a tall building and could jeopardise the safety of the surroundings during and after completion.

There are concerns about traffic congestion in the area as well, among other things.

The residents had objected to a similar proposed development in 2016, and held protests, citing similar concerns. The project then went silent. Lot 635 is an L-shaped land measuring 1,208sq m and the land status has been converted to commercial.

The land was later used as a carpark and carwash but closed down at the start of the movement control order last year.

The residents assumed that the earlier project had been called off but this was not the case.

Fong questioned the basis of the approval given to the project despite serious objections from the residents.

He believed that the earlier project was put on hold by then Federal Territories minister Datuk Seri Tengku Adnan Tengku Mansor because of concerns about its safety, traffic congestion and density.

The order was for a commercial development project with a plot ratio of 1:6.5 comprising a 32-storey office block and a 10-storey mechanical carpark. It also involved the conversion of the land status from residential to commercial.

He said the new landowner was Teringin Sentral Sdn Bhd.

“An amendment was made to the development order on March 31 for the construction of a 38-storey office block comprising 27-storey Soho (small office home office), a 10-storey carpark and three recreational facilities. “It was explained that the plot ratio of 1:6.5 was approved after considering that the surrounding areas were approved for mixed development.

“Shahidan also stated that Jalan Scott, which has a width of 24.4m, will be able to support the project and that the area was accessible by public transport as it was located near KL Sentral and Tun Sambathan Monorail Station,” he said.

Neighbouring residents claim that they have been kept in the dark about the project.

A Villa Scott condominium resident, who only wanted to be known as Liu, said he would be worried for his safety once the project starts.

He said the size of the land was more suited to construct a bungalow. There are four temples along Jalan Scott, which is always congested.

“I am not against development, but it has to be suitable with the land size, surroundings and infrastructure.

“Last month, it looked like soil tests were being conducted. The residents were worried that a tall building was going to come up,” he said.

Liu said his unit was facing the land and was concerned for his safety if an accident were to happen at the construction site, due to its proximity to his condo.

“The office block will be towering over the adjacent buildings.

“I would be very scared of the crane on top of the building. If it were to fall, it would crash into our condominium because there would not be much space in between the two buildings.

“There is also not much space for heavy vehicles to move in and out during construction and the contractors may resort to using the roadside parking lots.

“I am also concerned about fire safety and want the authorities to check if the project follows fire safety requirements.”

Liu said he had complained to DBKL on Oct 20 about the activities at the site.

“I wanted to know if there were any applications to develop the land and if yes, what were the details because some residents wanted to object.

“I received a reply stating that there was no work being done on-site and that the signage and hoarding were in good condition.

“The feedback also said that the hearing for objections was under the jurisdiction of the City Planning Department,” he said, adding that the residents knew nothing about the project.

Scott Sentral resident R. Gnanasakaran, 66, said he was against the construction of any tall building at the site because the surrounding ones may be jeopardised when the foundation is being laid.

“Villa Scott is over 20 years old and Scott Sentral is over a decade old.

“The land involved is too small and too close to other neighbouring buildings, so much so they will be invading the privacy of the residents in the adjacent condominiums.

“Apart from the safety and privacy aspect, the surrounding residents will suffer from the dust and noise arising from the construction site. Many of us here are senior citizens or families with young children,” he said.

He also pointed out that any high-density development would add to the traffic congestion and parking problems in the area.

“I do not think the roads can take on more vehicles because the situation is already bad. There are four temples here.

“Before the Covid-19 pandemic, traffic was already bad in the area every Thursday evenings and Saturday mornings, as well as during Hindu religious occasions and weddings due to the high number of visitors to the temples.

“If the project is a high-density one, the traffic condition will get from bad to worse,” he said.

DBKL has yet to respond at press time. Attempts to contact the developer for comments were futile.