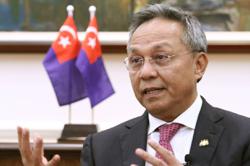 THE RM2.56bil bus rapid transit project in Iskandar Malaysia will help to increase the mobility of those living in the economic corridor.

Johor Mentri Besar Datuk Hasni Mohammad said it had the potential to become the backbone of public transportation connecting to several key areas in the region.

“Integrated, efficient and environment-friendly public transport infrastructure will be the catalyst to economic development in the region,” Hasni said in a statement.

He said this would help increase the social-economic development of the state, uplift the living standard of the people and attract investors to the region.

Hasni, who is also Iskandar Regional Development Authority (Irda) co-chairman, said this was in tandem with Iskandar Malaysia’s vision to become a strong and sustainable metropolis of international standing by 2025.

He said the bus rapid transit project had identified feeder, direct and main routes that reach 2,043km or about 90% of the populated areas in Iskandar Malaysia.

When fully implemented, it will be able to connect 55 feeder routes and 44 direct routes with the main route covering 28 stations.

“Public involvement is important as the project is one of the nation’s initiatives to drive recovery,” said Hasni.

He said Irda had, from the outset, continuously engaged with people in developing the bus rapid transit system.

He acknowledged that the success of this public transport system relied on the inclusion of the people’s input and feedback.

Hasni also announced that the bus rapid transit system would henceforth be known as Iskandar Rapid Transit, as it was the winning entry in Iskandar Malaysia Bus Rapid Transit (IMBRT) brand name contest.

The winning name, submitted by Syzalina Jasni, was one of more than 200 entries received by Irda for the contest which ran from April to May this year.

The rapid transit network is expected to start operations in the fourth quarter of 2023.