A TOTAL of 1,346 owners of Residensi Wilayah Keluarga Malaysia (RWKM) Desa Satumas received the keys to their units.

The project, built on 1.44ha of land, offers three blocks of 43-storey buildings priced at RM230,000 each. Each unit — with a built-up area of ​​850 sq ft — has three bedrooms and two bathrooms. It also comes with a covered parking space.

RWKM, formerly known as Residensi Wilayah, was introduced by the Federal Territories Ministry to help Malaysian families, particularly those in the low- and middle-income brackets as well as M40 citizens in the city centre looking for affordable housing with a conducive environment.

Federal Territories Minister Datuk Seri Shahidan Kassim said as of Sept 30, a total of 62,701 units had been approved involving 93 projects in Kuala Lumpur, three projects in Putrajaya and four projects in Labuan, which were at various stages of development.

“People who are interested in this project can apply through the official portal of Residensi Wilayah, subject to the conditions set,” he said at the launch of Desa Satumas.

To date, Aset Kayamas has successfully handed over keys to buyers of 10,975 units under the government’s Residensi Wilayah programme.

Desa Satumas residence is the 15th Residensi Wilayah project that has been successfully completed by Aset Kayamas. The company also aims to hand over 478 units at the Kuchaimas Residence this month. 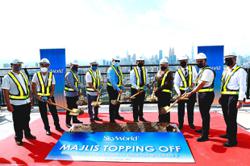