Road cracks in Taman Harmoni due to soil movement 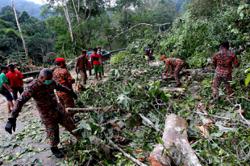 GEORGE TOWN: Remedial works on cracks in the road which appeared near the Taman Harmoni apartment in Solok Sekolah La Salle will be conducted as soon as possible, said Kebun Bunga assemblyman Jason Ong.

Ong said cracks were first reported by some of the residents in the area on Saturday (Oct 9) and had worsened on Monday (Oct 11), with parts of the land sinking.

"Soil movement and sinking caused the cracks but surrounding structures as well as the building's structure are not affected.

"The Penang Island City Council's geo-technical officers visited the site and remedial works will be carried out soon," he said.

He said presently, the area has been sealed off for safety purposes.