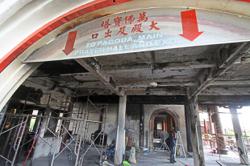 Khoo handing over a packet of goodies to Teoh.

TRADERS and shoppers at Pasir Pinji wet market in Ipoh were pleasantly surprised when they received goodies from Ipoh Timur MCA division in conjunction with the Mid-Autumn Festival.

Leading the team was division chief Tony Khoo, who is also an Ipoh city councillor.

He said it had been some time since people celebrated the festival on a grand scale.

Usually during such festivals, a parade and other events would be held, he added.

“So to bring some cheer, we distributed packets consisting of mooncakes, cookies, chocolates and face masks.

“The atmosphere has been so gloomy and we thought small contributions can brighten up the situation,” he said before distributing the goodies at the market.

Khoo said 1,800 of the packets were prepared for distribution to other morning and wet markets nearby to create a festive atmosphere.

Trader Teoh Siew Chin, 67, who sold biscuits at the market, said it was nice to receive the goodies during the festive period.

“Since no celebration is allowed, this small gesture reminds us to enjoy the festival.

“I am hoping the number of Covid-19 cases will reduce and all of us will be able to enjoy our lives again,” she added.

Another trader, KS Lim, 65, said although people were unable to enjoy the festival together, the goodies added cheer to their day.

Khoo also spoke to traders to find out how they were doing and if they faced any problems.

He was especially concerned for the traders who operated at the morning market.

“Sometimes traders are confused with the standard operating procedure (SOP) and misunderstandings can occur with enforcement officers, thus my team is there to clear confusions.

“Of course, the SOP must be adhered to by traders to ensure their safety and that of the market- goers,” he added.

Khoo also said repairs to the market roof was expected to be completed in a few days’ time.

The council allocated RM300,000 to upgrade the roof after traders complained about leakage.

“It was decided that it is better to repair the roof and address other structures and facilities later.

“This market has not been upgraded for 40 years.

“Repairing the roof is a good start,” he added. 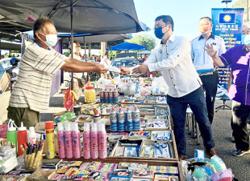