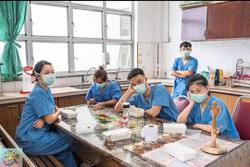 A FIELD hospital with 100 beds will be built at Penang Hospital by this week.

Health Minister Khairy Jamaluddin said the field hospital would be set up by the army and the Health Ministry at the parking lot of the hospital.

“We have approved and agreed to it in principle and if we can get the green light, it can be done within a week,” he said after visiting Penang Hospital on Saturday.

The decision to build the field hospital was mooted after Penang Hospital reached its critical capacity due to increasing Covid-19 cases.

He said the field hospital would be equipped with respiratory facilities, intensive care unit (ICU) equipment and other facilities.

On Saturday, ministry officials and army officers visited the site to plot the field hospital layout. Getting organised: Second Infantry Division assistant director-general (health services) Lt Kol (Dr) Faira Rosmarina Mohd Rustam (right) and her officers plotting the layout of the facility to be set up at the car park of Penang Hospital in George Town. — ZHAFARAN NASIB/The Star

To reduce the burden further, Khairy announced that the ministry would discuss with Penang’s private hospitals a proposal to rent their operating theatres for surgeons in public healthcare to perform high-risk operations there, since operating theatres in Penang Hospital were now at full capacity.

Khairy also said Penang Health Department was tracking down the remaining 10% of the state’s population who had not even received their first dose of the vaccine.

“We are still tracking them to get them vaccinated,” he said in a press conference at Komtar on Saturday.

Among the methods used to find them are mobile vaccination trips, house-to-house visits with the help of assemblymen and government agencies.

To make sure that every adult in Penang are vaccinated, Khairy announced that some of the 10 vaccination centres with the walk-in option will also be open to foreigners after enough locals have gotten their shots. “We will carry out vaccination campaigns for foreigners in their own languages so that they can go to get their vaccinations,” he said.

Describing the next two or three weeks as critical for Penang, Khairy said it is time for general practitioners to be roped in to help out at Covid-19 Assessments Centres (CAC).

He said each general practitioner would be able to monitor 10 to 15 patients on home quarantine to reduce the number of brought-in-dead cases, while the capacity of all low risk Covid-19 quarantine and treatment centres here will be increased.

Meanwhile, Khairy announced the appointment of Bukit Mertajam MP Steven Sim as the coordinator between Federal and Penang Governments on Covid-19 issues.

“We decided to appoint Sim after a discussion with Chow and Bagan MP Lim Guan Eng,” he said.

He said this was in keeping with the bipartisan spirit coined by the Prime Minister in managing the pandemic.

Sim’s role will be similar to the role of Bangi MP Ong Kian Mng in Selangor’s Operation Surge Capacity.

In separate development, Khairy announced that the polio outbreak in the country is contained after experts from the World Health Organisation found that Malaysia’s efforts to control the spread of the disease were successful.

In the statement, Khairy said from Jan 1, 2019, to Sept 9 this year, a total of 426 acute flaccid paralysis cases were reported across the country.

“Of these, four cases were confirmed to be polio, all of which were in Sabah and involved a three-month-old baby and children aged three, eight and 11.

“In the last case, the child started to suffer from symptoms of paralysis on Jan 18 last year. All four cases were found to have not received or completed their polio immunisation,” he said.