WATER leaking out of the walls and from beneath floor tiles, mould and mildew, as well as a foul stench are just some of the problems residents at the Seri Aman people’s housing project (PPR) in Kepong have been facing for the last few years.

The four-block low-cost flats is among the newer ones that house former squatters from Jinjang Utara.

Its residents association (RA) chairman Mohamed Nawaz Koya said he has received more than 100 complaints from residents regarding water leaks at their units that go back two years.

“We have a serious problem here,” he said.

“There are complaints about shoddy waterproofing in toilets.

“In Block D, it looks like there is a leak within the internal and external piping where water is seeping through concrete,” he told StarMetro. 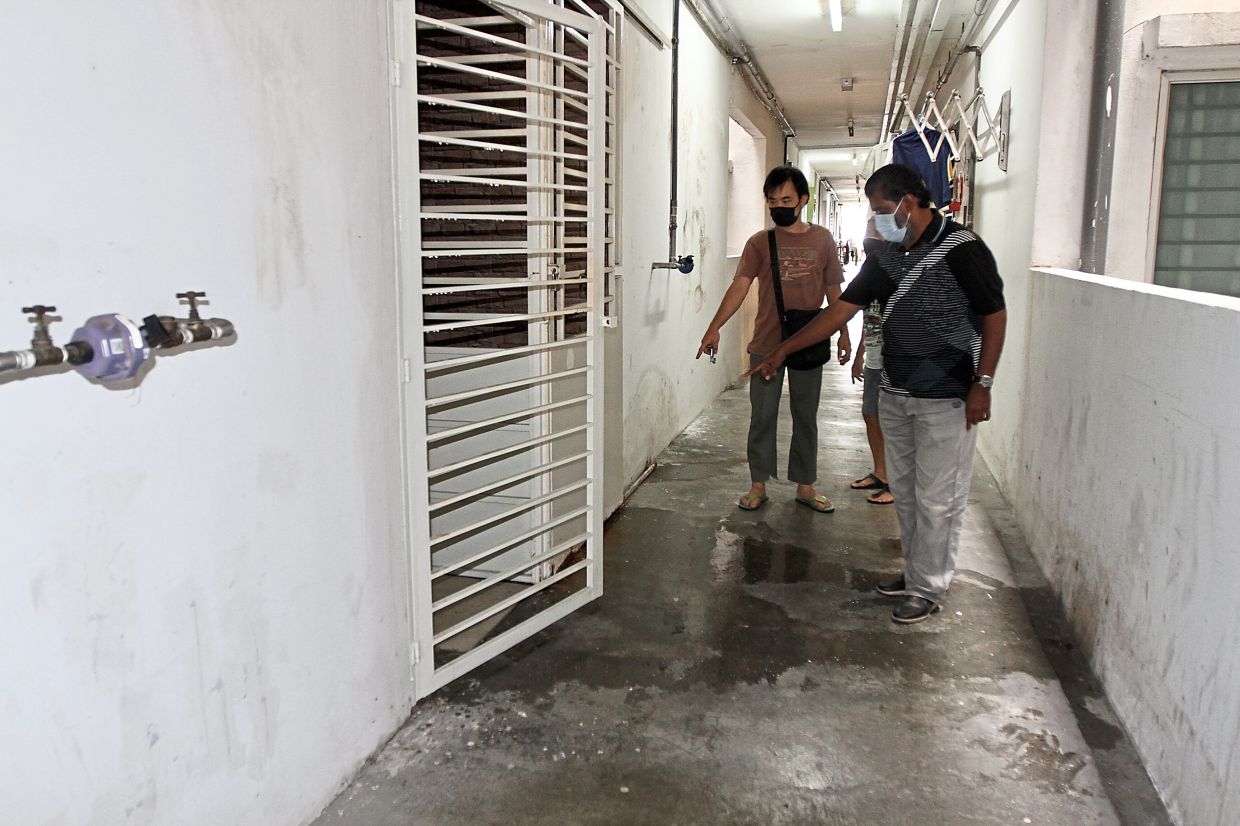 Nawaz (right) and Fang assessing the leakage in Block D.

Nawaz said the PPR was fully completed in 2015 and the squatters began to move into their units in batches until 2017.

He explained that under the Defect Liability Period (DLP) governed by the Housing Development Act, residents must report any problems of damage, defect and faulty workmanship at their units to the developer within 24 months from the date they received their keys.

“After the two years was up (from 2017 to 2019), the developer handed over property management to the purview of the Housing and Local Government Ministry, where any complaint on defects should be lodged with Kuala Lumpur City Hall (DBKL),” he added.

The 1,600-unit PPR Seri Aman is a project under the Ministry, and was built at a cost of RM215mil.

Residents were given the option to buy their units with cash, withdraw from Account Two of the Employees Provident Fund (EPF) or take a loan under the rent-to-own scheme by the Federal Territory Foundation (YWP).

“Some residents received their keys after the DLP expired, so DBKL should oversee the maintenance of the flats because the residents are paying maintenance charges of RM66 every month,” Nawaz said.

After the residents received their keys, they would be given a defects list based on the DLP and the residents would have one month to make a report. “All defects reported should be repaired by the developer or DBKL.

“If the residents have new problems within the one month time-frame, this also shall be rectified by either the developer or DBKL,” he said. Anbuchelvan says he noticed water seeping out from the walls when he moved in.

However, Nawaz highlighted that whenever a DBKL contractor did rectification at PPR Seri Aman, there appeared to be no supervision on quality of work, so the residents would end up submitting the same reports again.

“The contractors appointed by DBKL do not report their work progress at Pejabat Kecil Perumahan PPR Seri Aman, so a problem arises when the same resident reports the same problem at the Pejabat Kecil.

“The DBKL officer there also does not know what is happening because all the contractors who come do not submit their jobs list at the office.

“They will report directly to DBKL’s maintenance division.

“This worsens the situation because we do not know who is telling the truth.”

Nawaz claimed that DBKL had given plenty of excuses as to why repairs could not be done.

“First, DBKL told us that we need to form a joint management body to lodge any report.

“But the last two times in the last three years when we tried to hold elections to form this body, DBKL either cancelled or postponed it because of insufficient quorum,” he said.

After that, Nawaz added DBKL informed them that the monthly maintenance fee was not enough to cover the cost of repairs and that the residents had to bear the costs themselves.

Contract worker Robert K, 45, a resident from Block C, has had to put up with water leaking from the walls of his unit and from underneath floor tiles since he moved into in September 2018.

“I don’t know where the leak is coming from, but there is water everywhere.

“Despite lodging multiple complaints with DBKL, nothing has been done to fix the problem.

“My wife has to mop the floor morning, afternoon and night,” he told StarMetro, adding that his floor tiles were popping out because water was seeping through the floor.

Robert said the leaks had damaged furniture, which in turn resulted in termite infestation.

“I had to throw out some furniture that rotted from all the leaking water.

“DBKL contractors came to look at the problem but until today, have not taken any steps to fix it.

“The officers told us that we needed to fix the leaks, as if we caused the damage to the property, when in fact the problem was there when we moved in,” he pointed out.

“There is also a leak from within the unit’s exterior wall and the water is smelly and greenish. “We informed DBKL about this and its contractor came to assess the problem.

“They said they will look into it, but nothing has been done until today,” he said. Mould has been growing on an exterior wall of PPR Seri Aman in Kepong because water leaks in the building have not been addressed.

Rajedran complained that Usha had to replace a bed and cupboard that had been damaged due to the leak.

“Her floor and bedroom walls are all wet.

“We have no idea where the leak is coming from,” he said.

Usha’s husband, J. Anbuchelvan, 37, said they noticed water seeping out of the walls when they moved into the unit in March 2019.

“A DBKL contractor came to assess the leak, but he did not hack the wall to check thoroughly.

“Instead, he just did some drilling and patched it up, which did not solve the problem.

Anbuchelvan also said they were making payments towards the flat.

“Our loan with YWP is yet to be approved, so we pay a RM200 monthly rent to DBKL and because of this, DBKL has said the onus is on residents to fix the leaks,” he revealed.

Convenience store worker Mohamad Shariff Ropani, 52, from Block A, has been living with mould and mildew because of the water damage in his unit since he moved sometime in 2018.

The problem is mainly in his master bedroom and attached bathroom, where green and black mould can be clearly seen.

“My wife and I are constantly cleaning every day and the problem has yet to be resolved.

“We have lodged multiple complaints through our RA office and we hope DBKL will fix this problem quickly,” said Shariff, a father of two children aged 15 and 17.

Shariff is afraid the mould will spread and affect their health in the long run.

“This is an urgent matter that needs solving,” he said.

Mechanic Fang Kian Kok, 45, whose home is in Block D, found he could not even move into his unit in 2018 because of the never-ending water leaks.

He has had to live in his mother’s house in Jinjang instead.

“The unit in PPR Seri Aman is uninhabitable.

“As soon as I received the keys three years ago and put in basic fixtures such as fans and lights, I saw the water leaks.

“They seemed to originate from the floor above my unit.

“I lodged a report and a DBKL contractor apparently came to address the problem twice in that other unit.

“The leak stopped, but then it started again shortly after that.

“I had spent about RM600 painting my unit, yet now it is all damaged with mould.

“The leaks are still happening and with the movement control order, it has become worse here,” he said.

A statement issued by DBKL said Block A comprises rental units and its maintenance comes under DBKL’s responsibility.

“However, repairs in DBKL rental units are subject to the Rental Agreement (PER.VII.SEK.7.01. Subsection (G)) and any damage that occurs must first be reported to the Housing Sub-Office.

“An investigation is underway to assess a water pipe leak in a unit in this block.

“A contractor will carry out the repairs as soon as possible.”

DBKL further explained that Blocks B, C and D were units that were sold and the maintenance was the responsibility of the occupants.

“The results of an inspection by DBKL in Block C found that the complaint was about a water pipe leak in the wall and from a toilet of the residential unit above.

“Leaks involving water pipes in the interior of the residential units are the responsibility of the occupants.

“Repairs on water seepage or leakage that occur between floors are the responsibility of the occupants of the unit above if the complainant is from the unit below.

“However, the common areas (sidewalk lights/ stair railing/ lifts) at the PPR are still under the responsibility of DBKL,” it said.