IT IS a great time for durian lovers as there is ample supply of the King of Fruits amid the ongoing Covid-19 pandemic.

With the season now at its peak, scores of traders have set up stalls by the roadside in Ipoh with the fruit displayed in all its glory.

Seller K. Vijay, 42, said with the abundant supply, durian was being sold at relatively lower prices compared to previous years.

“We (the traders) have been selling durian and other local fruits in Menglembu for more than two years and I must say that the prices this year have been the lowest so far,” he said when met at his stall.

“We cannot go too low as our fruits are of good quality. We have customers coming from various parts of Ipoh.”

He said they could get up to 100 customers a day.

“We have an assortment of durian available, such as durian kampung, durian susu, durian kahwin, musang king and black thorn.”

Vijay said the prices for musang king and black thorn were higher due to the taste and texture of these varieties.

“We have customers who come just for the black thorn,” he said, adding that it could be sold for up to RM95 per kilogramme.

“We used to sell them at RM120 per kg but now the price has dropped since our suppliers are selling it to us at a lower price.”

He added that for now, black thorn was still the most expensive type available at the stall.

“And due to its pricing, we are selling them in limited amounts.

“We only sell 15 black thorn daily and these would be sold out before 1pm,” he said.

A visit to the small township of Menglembu located within Ipoh city revealed that more than 10 stalls were selling only durian.

The fruits were from orchards in Batu Kurau, Gopeng and Kampar.

Besides Menglembu, there are also stalls in other parts of the city, including Ipoh Garden and Tambun.

Another seller who only wanted to be known as Mee, 48, said he came all the way from Bota to sell durian in Ipoh.

“We only have durian kampung at the stall and these are from Kampar and Gopeng.

“I used to sell them at Kampung Bukit Merah in Menglembu, but I found out our stall had been demolished.

“I decided to sell them at Jalan Lee Ming Hin, also in Menglembu,” he said, adding that the durian cost only RM5 per kg.

“The movement control order has impacted our sales.

“We cannot sell at the same price as last year, which was between RM7 and RM9 per kg.

Mee said he has fewer customers now compared to last year as there were many other sellers in the same area,” he said.

The durian is picked up from orchards every day.

“On some days, there will be leftover fruits from the day before.

“These will be sold at a lower price and customers can bargain,” Mee said, adding that the season was expected to end by August.

“As soon as it does, I will go back to selling fish,” he said.

Mohd Ikhwanul Hafiq Mohd Nasarudin, 26, said the durian business has been quite good despite the pandemic.

“I can get up to 20 customers a day at my stall at Lebuh Bandar Baru Tambun.

“I have more supplies of durian kampung compared to last year.

“Just a few days ago, a regular customer bought about 15kg of durian,” he said.

“The business was started by my late grandfather and the durian is from his farm in Kampar.

“I would help out occasionally as I also used to sell motorcycle accessories.

“I am now fully focused on selling durian after stopping my other business, which has been impacted by the MCO,” he said.

Meanwhile, a customer who only wanted to be known as Dr Lee, said he has spent over RM1,000 on durians.

“My wife is pregnant with our first child and is craving for the fruit.

“Her favourite used to be musang king but now she prefers black thorn while my father likes durian susu,” he said.

“I noticed that prices are slightly cheaper compared to last year.

“I don’t bargain with the sellers since I know they are struggling too,” he said.

Lee added that one of his fondest memories was eating durian at a colleague’s house in Pahang in 2010.

“His mother made glutinous rice with durian and I really learned to like it then,” he said. Mohd Ikhwanul can get up to 20 customers a day. 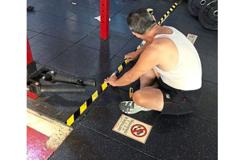