Megala (left) and her daughter K. Sanggetha, 13, are thankful for the food items they received.

WITH three mouths to feed and bills to pay, R. Megala had no choice but to hoist a white flag outside her house in Klebang, Ipoh.

“My monthly house rental of RM500 has not been paid for the last six months, while my electricity bill has reached over RM1,000.

“I can’t afford to pay my other utility bills that have been outstanding for over three months and my landlord keeps calling me for the rent which I am unable to pay at the moment,” said Megala, who received essential food items from Ipoh City Council (MBI).

To support her three school- going children aged between six and 13, Megala decided to clean houses — receiving RM20 for four hours of work.

In fact, it was an employer who told her about the white flag campaign, she said, adding that help from the council came just four days after she put up an old towel as a white flag.

The city council responded by donating items to her under the “MBI Prihatin” (MBI Cares) programme, which has seen it collaborating with supermarket chain Econsave.

“I cannot thank the city council and Econsave enough for rendering help so quickly,” Megala, 37, said, adding that there were days when she and her three children only had instant noodles to eat.

Azizul said while essential food items had been provided to the family as an immediate measure, the city council would also look into helping Megala settle her house rent and utility bills.

He added that this was the third time MBI had come forward to help those who raised a white flag.

Megala said she did not expect any help from her lorry driver husband, who returned to his hometown after losing his job because of the lockdown.

As the money she earns as a cleaner is not enough, Megala is looking for more work or households that required her services. 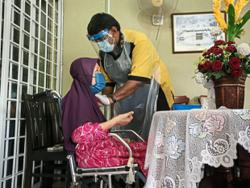