People takeaway their food before 8pm at one of the nasi kandar restaurant during the MCO 3.0 in Bandar Baru Air Itam, Farlim.

THE Penang government is grateful that the operating hours for hawkers, vendors, eateries and restaurants have been streamlined.

State local government committee chairman Jagdeep Singh Deo said the operating hours from 6am to 10pm allowed now made a lot of difference for both businessmen and customers alike.

Before this, they were allowed to do business from 6am to 8pm.

Jagdeep had recently raised the concerns of hawker stalls at public markets, who were earlier allowed to only start operating at 8am, while markets could open at 6am.

He said though they were in the same premises, there was a difference in operating hours.

Speaking at a virtual press conference on Monday,

Jagdeep said while the Federal Government announced that the country is in phase One of the National Recovery Plan until cases drop below 4,000 a day, related decisions should be further reviewed.

Prime Minister Tan Sri Muhyiddin Yassin in announcing the plan on June 15 had said that the move was a strategy to transition out of the movement control order (MCO) in stages.

“In my opinion, only targeted areas should remain under MCO instead of a blanket rule as the economy is already quite strained.

“The decision to halt operations may be needed for certain locations, but not for all.

“We are seeing over 5,000 Covid-19 cases daily but in certain states the figures are different,” he said.

Jagdeep said many people had their income and livelihood affected during the MCO.

“In Penang, we tried to help in terms of economic assistance and the state is looking into more ways but at the end of the day, we hope the Federal Government can help out as well,” he added.

He urged Penangites to come forward and register themselves to be vaccinated under the National Covid-19 Immunisation Programme.

He also called on everyone to cooperate with the authorities and follow necessary standard operating procedures to ensure cases fall below the 4,000 mark. People takeaway their food before 8pm at one of the nasi kandar restaurant during the MCO 3.0 in Bandar Baru Air Itam, Farlim.

Wokers clening-up their shop before 8pm during the MCO 3.0 in Bandar Baru Air Itam, Farlim. 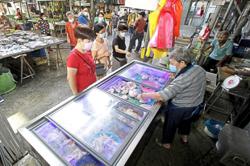