People waiting for their turn to enter a PPV at Kompleks Sukan Desa Tasik in Sungai Besi. — Photos: YAP CHEE HONG/ The Star

DEVI Arumugam is happy that she will be going for her second Covid-19 jab at a different vaccination dispensing centre (PPV).

She is hoping that her upcoming appointment on June 9 will be less stressful than her earlier experience at Stadium Titiwangsa in Kuala Lumpur.

The 75-year-old, who lives in Taman Gembira, lauded the Covid-19 Immunisation Task Force’s (CITF) decision to close the Titiwangsa venue.

“We had to queue for over an hour before being allowed inside.

“There was no proper system, it was congested and chaotic.

It was earlier reported that operations at four PPVs in Kuala Lumpur would cease by June 6 and those initially scheduled to receive their jabs at these places would now have to go to two mega vaccination centres.

Those with appointments at Stadium Titiwangsa and Dewan Komuniti Taman Manjalara will be moved to Malaysia International Trade and Exhibition Centre (Mitec) in Jalan Duta.

Meanwhile, those with appointments at Kompleks Sukan Desa Tasik in Sungai Besi and Kompleks Komuniti Muhibbah in Bukit OUG will be transferred to the Axiata Arena in Bukit Jalil, which starts operations from June 7.

Senior citizen EL Choong, 72, who was due to be vaccinated at the Manjalara community hall, is worried, as he has yet to be informed of his Mitec appointment date. 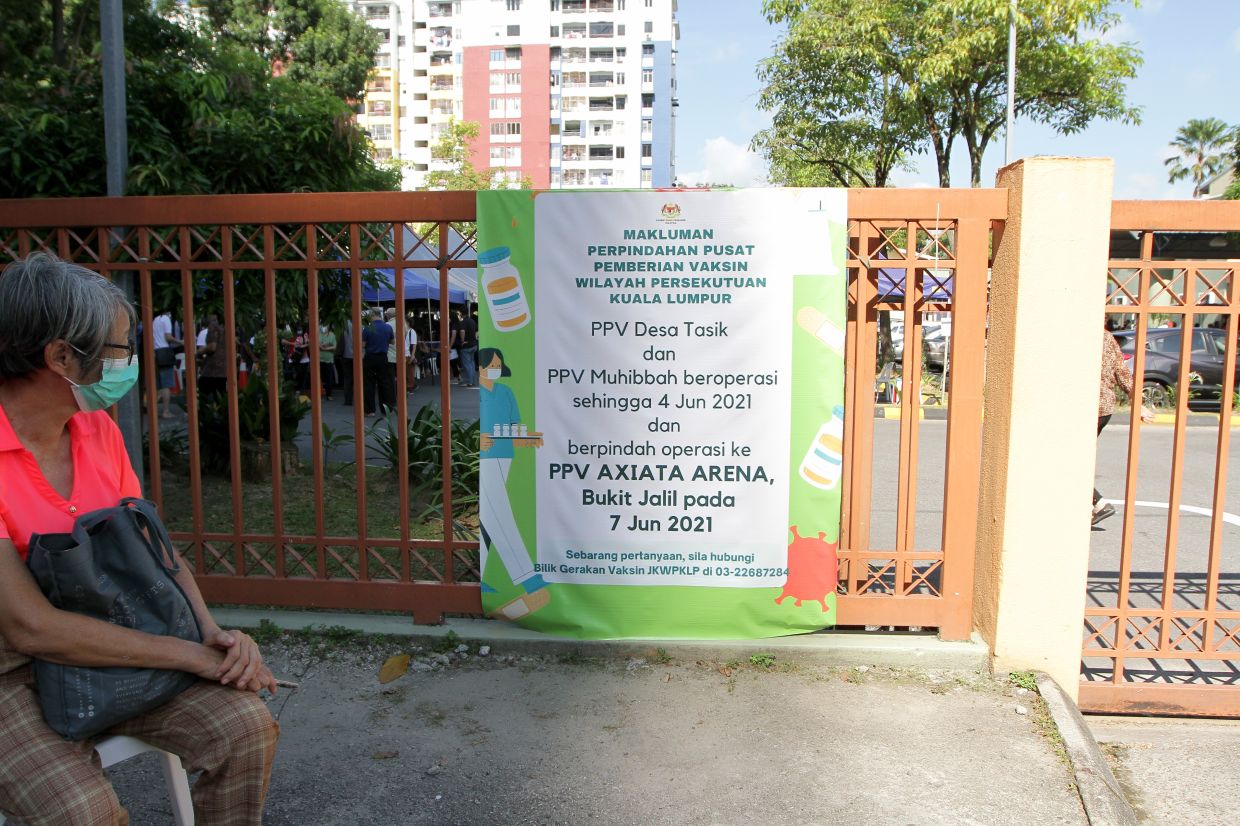 A sign outside Kompleks Sukan Desa Tasik, Sungai Besi announcing the closure of the centre on June 4 and opening of a PPV in Axiata Arena, Bukit Jalil on June 7.

“I am supposed to receive the first dose on June 5 and I have not received a new appointment date.

“I have been constantly checking the MySejahtera app for updates, ” he said.

The Kepong resident said his friends had complained about conditions at the Manjalara venue.

“The space was too small for the number of people scheduled to be vaccinated there, ” he said.

S. Saravanan is anxiously awaiting news of his new appointment date too.

The 66-year-old Taman Kepong resident received his first dose at the hall in Manjalara.

“Many were unsure of where the queue started, so they waited under trees for some shade.

“It was difficult to maintain physical distancing due to the large crowd.

“I am hoping to receive my new appointment at Mitec soon, ” he said.

Siti Mariam, 45, from Cheras, who accompanied her 80-year-old mother to the Titiwangsa centre, echoed similar sentiments of overcrowding, long waiting time and confusing instructions given by volunteers managing the crowd.

“I hope the new venue will be better, ’’ she said.

“I was informed that my second dose would probably be at Axiata Arena in Bukit Jalil, ’’ he said.