Our job to keep environment free of pollution 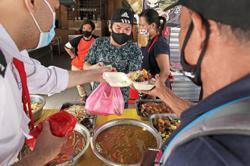 ISSUES like pollution only gain attention once something occurs.

Expressing regret over the irresponsible dumping of rubbish into the river, the ruler had cited pollutants as one of the main causes of flash floods in the area.

His Majesty had also ordered that the state government and local authorities come down hard on those responsible.

But until today, the river remains polluted.

Later, I interviewed state Environment Department (DOE) director Mohd Famey Yusoff, who said pollution was the toughest adversary the department had ever faced.

He said DOE would no longer compromise on the matter; all offences would be met with legal action or an immediate compound of RM2,000 under Section 29A of the Environmental Quality Act 1974.

He added that the hardest part in combating pollution was catching the culprits red-handed.

“We have tried every approach in spreading awareness on the importance of stopping pollution, but it falls on deaf ears.

“So there will be no more warnings. It is high time people are held responsible for their actions.

“Usually when conducting enforcement, there should be a carrot-and-stick approach, but from our observation, the stick approach is needed, ” he said.

Mohd Famey added that another kind of pollution that had become a worrying ‘trend’ these days were mini illegal rubbish dumps.

This appears to be true based on observation around my housing area in Taman Scientex, Pasir Gudang, where there are more than 10 such dumpsites within a 1km radius from my house.

Three of them are located less than 50m away and are filled with discarded household items such as pillows, TVs, doors and renovation waste.

Each time it is cleared by waste collectors, the mound of rubbish will grow again.

As Mohd Famey said, it would be hard to catch the culprit because you would never know who they are although they live around you.

“That is why, if we are able to catch these selfish individuals, we will give them the harshest punishment possible under the law, but we cannot do this without the public’s help, ” Mohd Famey added.

everyone’s duty to preserve our environment and keep it clean.

“Take for example the rivers in Pasir Gudang, we find all kinds of waste, including industrial waste, in the river because the public treat waterways like their personal rubbish bin.

“Yes, the council can do the clean-up work, but is it worth it if it is clean for one hour and get polluted again over the next 23 hours?

“We, ourselves, sometimes find rubbish in our car and throw it out the window with the expectation that someone else will pick it up. But that someone is often a lone individual, while those throwing rubbish are many, ” he pointed out.

Asman Shah also said that the public played a crucial role in keeping the environment clean, more so since they were the ones who would be most affected in the event of pollution.

Meanwhile, Johor Solid Waste Manage-ment and Public Cleansing Corporation (SWCorp) director Cairul Hisham Jalaluddin said they were expecting an 8% increase in waste collection during Ramadan, partly due to the return of bazaars this year.

“This year, SWCorp collected 221,633 tonnes of waste from January to March, ” he said, adding that it was currently promoting awareness of its separation-at-source and trash-to-cash programmes to reduce the amount of rubbish reaching landfills.

“It is my wish that we could somehow find a way to keep our environment clean without the need for gotong-royong programmes or constant reminders and warnings from the authorities, ” Cairul Hisham concluded.