Amirudin (second from left) cutting a ribbon to launch the library while looking on are (from left) Saari, Halim, Mohd Fauzi and Shukri.

LIVING in densely populated flats with limited public spaces can be difficult for children.

The local community can play a role by creating a safe area where they can socialise, and also act as a hub for learning.

A group of volunteers at a community garden set up at AU2 flats in Taman Keramat, Selangor did exactly that.

Head of the group, Halim Mohamad Saad said they collaborated with UCSI University, which received a RM8,000 grant from the Starfish Foundation, to build a small library in the community garden for the children.

Working hand in hand with 25 students and eight lecturers from the university from Nov 23 last year, the 644sq ft library was completed on Dec 19.

He highlighted that local bookstores also gave 1,000 books suitable for children and adults.

He revealed that plans were afoot to conduct free Mathematics and English tuition classes at the library, which cost RM26,000 to set up.

Selangor Mentri Besar Datuk Seri Amirudin Shari, who launched the library, said it was a positive effort towards improving residents’ quality of life.

“Libraries can play multiple roles in a community, such as a venue to socialise and hold discussions, which are important to residents.

“The state government welcomes such efforts to create a sustainable and wholesome living environment, ” he said, urging residents to take good care of the new facility. 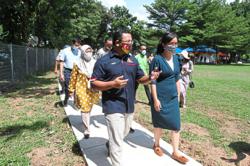