The council will continue to improve bicycle lanes and pedestrian walkways in George Town. – Filepic

THE ‘micromobility’ concept is growing and will soon have an impact on Penang’s plans to encourage the use of bicycles and e-scooters as transport modes.

Gazetted in October, Road Transport (Amendment) Act 2020 includes as ‘micromobility’ vehicles any mode propelled by electricity, internal combustion or human power, or any combination of these, and having a maximum speed of 50 km/h.

In particular, this affects a move in 2019 to introduce e-scooters as an alternative transport mode.

A Penang Island City Council (MBPP) spokesman said the state would have to abide by the Act.

“Micromobility vehicles have to be regulated by the Road Transport Department (JPJ).

“However, we will continue our commitments to improve cycling lanes and pedestrian walkways to make George Town a friendly city for cyclists and pedestrians, ” the spokesman said.

In 2019, about 150 e-scooters were stationed in various corners of Bayan Baru.

It was a trial run on e-scooter use held in conjunction with the seventh Asia-Pacific Urban Forum.

The MBPP spokesman said the plan was now put on hold pending new regulations from JPJ.

Penang island has a large community of cyclists, including commuters who use electric bikes to travel short distances.

JPJ enforcers on motorcycles have been patrolling popular cycling routes and cyclists found violating traffic rules or endangering others have been stopped and given an earful.

Penang JPJ operations unit chief Hasbullah Abu Bakar said no fines had been issued to cyclists in Penang so far.

However, enforcers will make sure cyclists outfit their bikes with lights for riding in the dark and use hand signals to indicate to other road users when they want to turn or stop.

The amendments of the Act empower JPJ enforcers, MBPP traffic wardens and the police to arrest and bring to court any micromobility vehicle user found to be riding recklessly or under the influence of alcohol or drugs.

JPJ will also have the power to make regulations on the use of micromobility vehicles.

In September last year, Transport Minister Datuk Seri Dr Wee Ka Siong had said the regulations would include mandatory registration and licences, and if appropriate,

bans on certain types of these vehicles from being used on the road.

“The Transport Ministry will explain the types of vehicles under this micromobility category as well as which ones should be licensed.

“Some types (of vehicles) that are not appropriate and safe for mixed use on the road will be prohibited, ” he said. 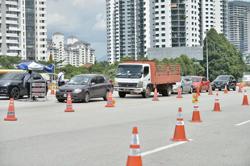