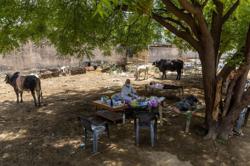 KUALA LUMPUR (Bernama): Heavy rain and thunderstorms in the capital on Monday (April 12) evening wreaked havoc as trees were uprooted in several areas, but no casualties were reported.

Meanwhile, in the incident in Jalan Perkasa, a 33-year-old woman and her four children, aged eight to 13 years old, cheated death when their house was hit by an uprooted tree at about 6.39pm, but all were rescued and did not sustain any injuries.

"Several vehicles parked on the road shoulder at the location were also damaged in the incident, but no victims were involved, ” it said.

Meanwhile, Prasarana, in a statement, said that at least 13 trees were uprooted and fell on the LRT tracks around the Maluri, Pandan Jaya, Chan Sow Lin and Cheras stations, which are located at ground level, causing LRT services along the Ampang and Sri Petaling lines to be affected.

"Rapid KL apologises for the disruption of this service and the inconvenience caused to our customers.

"Work to remove and evacuate passengers took a bit of time due to safety factors, including risks posed by storms, rain and lightning at the time, ” it said.

It added that work to evacuate passengers was completed at 10.20pm but the clearing operations and inspection of the tracks was carried out throughout the night for safety purposes. 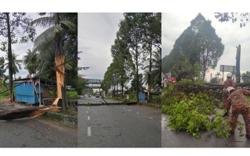