Homes near SUKE cut off from main access road 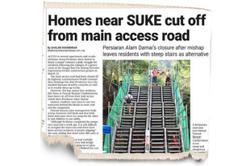 Following the accident on March 22, residents of Puncak Banyan Condominium and several other apartments nearby have been cut off from their only access which faces Persiaran Alam Damai.

ACCESS to several apartments and condominiums along Persiaran Alam Damai in Kuala Lumpur remains a daily struggle for residents following the collapse of a gantry crane at the Sungai Besi-Ulu Kelang Elevated Expressway (SUKE) construction project on March 22.

The main access road had been closed off by highway concessionaire Projek Lintasan Kota Holdings Sdn Bhd (Prolintas) since the incident because of safety concerns as well as to enable clean-up works.

However, this has meant that residents, like those at Puncak Banyan Condominium, have been cut off from their only access which faces Persiaran Alam Damai.

Instead, residents now have to use two staircases behind the blocks to enter and exit the compound.

Puncak Banyan joint management body acting chairman Jael Qeok said that both these staircases were too steep for the elderly and children to use safely.

“Although Prolintas completed the temporary staircase a week ago, it is still difficult to navigate the staircases and there have been several incidents of people slipping, ” she said, adding that there were 386 units at the condominium.

Qeok said the company had verbally agreed to build a temporary link bridge from the multi-storey parking lot to Jalan Mandarina Damai 1, located behind the condominium blocks.

“However, we have not been told when this will be built and how long it will take.

“In the meantime, residents with vehicles are forced to park outside the compound where there is limited parking, ” she said, adding that there was also no firm timeline on when Persiaran Alam Damai would be reopened.

Qeok said alternative access in the event of an emergency should have been made available before the construction of the project began.

“If this has been done, we will not be in the situation we are in now, ” she said during a press conference.

Patrick Cheah, 31, who has been living at Puncak Banyan the past four years, said Prolintas needed to ensure the safety of the community and road users.

“There have already been several incidents during the construction of this highway. Besides falling objects, there have been several cases of flash floods because the drainage is blocked or covered, ” he said.

Bangi MP Dr Ong Kian Ming, who was present, said that he would help to convey residents’ concerns to the relevant agencies.

“I will write to Works Minister Datuk Seri Fadillah Yusof as well as Prolintas and the Malaysian Highway Authority to ensure that immediate attention is given to this issue, ” he said. Also present was Balakong assemblyman Wong Siew Ki.

Altitude 236 Condominium resident Jenny Lau, in a letter to StarMetro, also voiced frustration over the lack of updates by Prolintas.

“What is the mitigation and analysis carried out by the SUKE team after the accident last month?

“Nothing has been arranged to inform the residents on what is happening or what actions will be taken by the company after the incident, ” she wrote.

Altitude 236 is one of the apartments affected by the road closure.

Lau said the map of alternative route was confusing.

During the incident, three construction workers were killed while a local motorist was seriously injured after a component of the gantry crane at the highway construction site collapsed.

Prolintas had previously announced that the removal of the gantry crane structure and repairs at the SUKE construction site accident was expected to take two weeks.

At press time, Prolintas had not responded to queries about the residents’ access concerns. Following the accident on March 22, residents of Puncak Banyan Condominium and several other apartments nearby have been cut off from their only access which faces Persiaran Alam Damai.

Qeok wants Prolintas to provide a firm timeline on when Persiaran Alam Damai will be reopened.

Cheah says the highway concessionaire needs to ensure the safety of the community and road users.