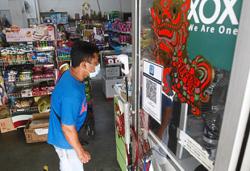 A customer getting his temperature checked at one of the mini markets in Jelutong, Penang. — Photo: ZHAFARAN NASIB/The Star

THE local authorities have carried out 1.37 million checks on premises in Penang to gauge the compliance level of standard operating procedures (SOPs), said Jagdeep Singh Deo.

“From the checks conducted, there was a compliance rate of over 99% among operators of premises on both the island and mainland, ” he said.

Meanwhile, checks on several shoplots and business premises in George Town found that customers and business operators were adhering to the SOPs.

At a restaurant selling economy rice in Taman Kheng Tian in Jelutong, six staff members were seen manning the counters and directing customers who queued up for takeaway meals at the premises.One of them, who wanted to

be known as Lim, 56, said they usually received many customers during lunchtime, which is the peak of their business hours.

“We stationed a few staff members to guide and remind customers about the SOPs and to maintain physical distancing.

“As our patrons are mostly from the neighbourhood, they cooperate well with us and are well-aware of the SOPs to follow when buying food.

“They are able to maintain physical distancing among themselves and everyone generally follows the SOPs, ” she said.

A retired schoolteacher, who wished to be known as Lau, 71, said he bought only essentials from the shops in the neighbourhood during MCO.

“I buy food from this shop almost every other day.

“I usually go to different places to pack my meals, but I dare not move around much during this MCO.

“As such, I only patronise the shops in my neighbourhood to get essentials as it is convenient and safer for me, ” he said.

At another mini market in Jelutong, store assistant June Lim, 66, said maintaining SOPs in the store had been easy so far although there were still a few stubborn customers who refused to follow the rules.

“We allow only three persons into the shop at any one time as ours is a small shop.

“Most customers are alright with that, but sometimes a few would give us problems.

“Some elderly customers would be upset if we tell them to wait outside since there are already three people in the shop.

“They would still insist on coming in.

“Some of them, who do not own smartphones to scan the MySejahtera QR code, also refused to record their names, saying it is troublesome.

“They said they merely wanted to buy one item only and they would do it swiftly.

“It is hard for us to handle such customers.

“We run a small business and if the authorities happen to do a spot check here, we would end up having to pay the compound, ” she added.