Projects for a better neighbourhood

THE movement control order period was a productive time for Damansara Idaman Owners and Residents Association (Diora) as the group implemented 11 projects within their neighbourhood in Ara Damansara, Petaling Jaya.

The projects, including an aqua pond revival, herb garden as well as a sanitisation booth for contractors and visitors, won them the top prize in the Petaling Jaya Sustainable Community Awards 2020 organised by Petaling Jaya City Council (MBPJ).

“Being housebound saw us having more time to look at issues in our neighbourhood, ” said Diora building management and youth committee member Ng Hann Clive.

“Based on complaints received and neighbourhood issues, we looked at our shortcomings and came up with ideas to address them.”

For example, Diora implemented a recycling centre and programme when residents wanted to better manage waste disposal. The herb garden served as a teaching tool for residents to eventually replicate within their homes.

“The aqua pond revival was a pilot project for us to assess the health and future plan of ponds in Damansara Idaman, by looking at aspects such as erosion and overpopulation of fish within one pond, ” said Ng.

“About half of the 600-odd residents in Diora are senior citizens with professional backgrounds. So they contribute to the strategising and planning aspects of Diora’s projects, while the youths, gardeners and security guards help with the implementation.”

Many had community garden or urban farming projects, while others ran plogging, recycling, solar light or local economic programmes that helped generate income for their community.

“The PJ Sustainable Community Awards has been an annual programme since 2001, and is aimed at making PJ a more resilient and sustainable city in line with the PJ Smart Sustainable and Resilient 2030 strategic plan, ” said Petaling Jaya mayor Datuk Mohd Sayuthi Bakar at the prize presentation ceremony at MBPJ’s headquarters.

“The plan incorporates elements of the Sustainable Development Goals (SDGs) as mapped out by the United Nations Development Programme, ” he added.

In line with the implementation of PJ Smart City, he said MBPJ had set a target of creating a Smart Society or Society 5.0 PJ by encouraging residents associations (RA) and Rukun Tetangga (RT) to incorporate smart technologies in their projects and programmes.

“As such, the format for this year’s awards included the use of Internet of Things and smart technology elements for data collection, analysis and future planning for proposed projects and programmes, ” said Mohd Sayuthi.

“All these digital data will be shared with MBPJ to enable the city council to better plan policies and programmes for the city.”

He credited the 4,270 projects by the various RA, RT and non-governmental organisations over nearly two decades as one of the factors to Petaling Jaya being named “The Most Sustainable City in Malaysia” based on the Murninet (Malaysian Urban Indicators Network) Sustainable City Index.

“Judging was done based on how the projects would meet the SDGs for PJ as a whole and the community’s understanding of their project’s environmental, social and economic impacts, ” said Malaysian Institute of Planners vice-president Datin Mazrina Abdul Khalid, who headed the awards’ jury panel.

“This year’s judging included how smart technology was applied in activities, such as a mobile app used to monitor safety, ” she added.

She noted that a number of the communities had projects that could be improved on to be replicated in other cities and states, and even showcased at an international level.

“But I hope it will also groom younger local champions who will manage their community’s programmes more efficiently and continue projects started by their predecessors.” 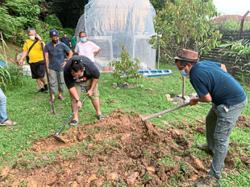