THE physically disabled and visually impaired lament that although they have the necessary academic qualifications, they are not recognised and not offered a stable job to secure their future.

Visually impaired Dr Lim Tien Hong, 37, from Taiping, Perak, who has a PhD in Development Economics, is one of them.

He has attended over 30 job interviews but never got an offer that matched his qualifications.

The closest he got to a suitable job was as a tutor in a public university while he was pursuing a Masters in Economics at the same university in 2010. He said the contract was not renewed after two years.

“I am always looking at job advertisements and sending in my resume.

“I have attended dozens of interviews but never got a call back.

“I live in Brickfields, Kuala Lumpur and am now working as an administrative executive in a private company in Cheras. My daily task is making appointments for the company’s sales team to meet their clients.”

Lim said employers were not confident about hiring disabled persons as they did not know their capabilities.

Most employers expected their staff to start work without training, which was very difficult for the

disabled, he said, and called on employers to give the disabled a chance to prove themselves.

Fifty-three-year-old Kaldip Kaur, a former teacher who volunteered to assist Lim during his doctorate studies in 2016, said people did not want to see or deal with visually impaired persons in order to avoid feeling uncomfortable.

“Visually impaired persons have different body language. Many people feel uncomfortable around them and are sympathetic, instead of recognising their abilities and personalities.

“I presume hiring managers have preconceived notions about his abilities and the adjustments that they will have to make, so they do not broach the subject on how to help him fit in and contribute.

“In Lim’s case, he can do almost everything a sighted person is able to do, provided he has a computer with headphones, ” she said.

Cheras lad Ruvindiran Mohan, 30, who is also visually impaired, has a similar story.

He has a first-class degree in Social Work from Universiti Sains Malaysia but has yet to secure a suitable job after attending over 30 interviews, including those in the public sector.

“I attended interviews for community development officer positions related to my studies in the Welfare Department, Health Ministry and National Unity Ministry but was not successful.

“I also applied for customer service and call centre operator positions but the companies’ management teams were reluctant to allow me to download screen reader software into the office computers to help me read, ” he said.

He currently does part-time Braille editing work for a publisher in Sentul, Kuala Lumpur, and is also a motivational speaker.

Ruvindiran said that with the movement control order in effect, he was only doing editing work.

“I do hope the Government enforces the 1% policy to hire the disabled soon.

“I am very passionate about social work and want to contribute to the community too, ” he said.

Wheelchair user Firdaus Yusuf, 26, from Ulu Kinta in Perak, said people like him had slim chance to gain employment as many of the companies hiring disabled staff did not have a wheelchair-friendly environment.

Only big companies, he said, had ramps and rails to enable the wheelchair-bound to move independently.

“I live in a small town and there are only a few big companies there.

“Small companies are usually located on the upper floors of shoplots.

“Since completing SPM, I have been doing any job I can get, including reselling products for a commission and drop-shipping.

“A couple of years ago, I also tried my hand at selling produce like potatoes, onions and salted fish in the morning market using a three-wheeled motorcycle but had to stop after two years as carrying the heavy loads strained my spine.

“I wanted to secure a clerical job in the government sector, so I sat for and passed the Public Services Commission examination last year. But I failed in the job interview, ” he said.

Firdaus, who lives with his mother and sister in their family home, said the monthly welfare aid helped but hoped the government would focus on opening more job opportunities for the disabled.

“I cannot live on the government allowance and do odd jobs forever.

“I too need a job with a steady income to secure my future, ” he said.

Mohd Fadzriq Izzardy, 33, from Ijok, Selangor, who was paralysed in 2012 after a fall, said companies needed to make adjustments to accommodate the needs of the disabled.

After completing the National Skills Certificate Level 2 in the electrical field, he worked as a technician before the tragic fall that broke his spine when doing work on a lamp post.

“After recovering from the fall, I worked as a foot masseur and later landed a job as a call centre operator in a utility company, ” he said, adding that he subsequently had to resign when he developed pressure sores.

“There are many disabled persons like me who want to work but are unable to because of our special needs.

“If companies can show some empathy and compassion to accommodate our needs, we too can contribute to their organisation and to society, ” he said.

Fadzriq now runs a stall selling Ayam Percik at a weekly night market near his home.

“I get financial aid from Socso and the Welfare Department so I can get by because I do not have any dependents.

“But it will be difficult if I were married and had a family to care for, ” he added. 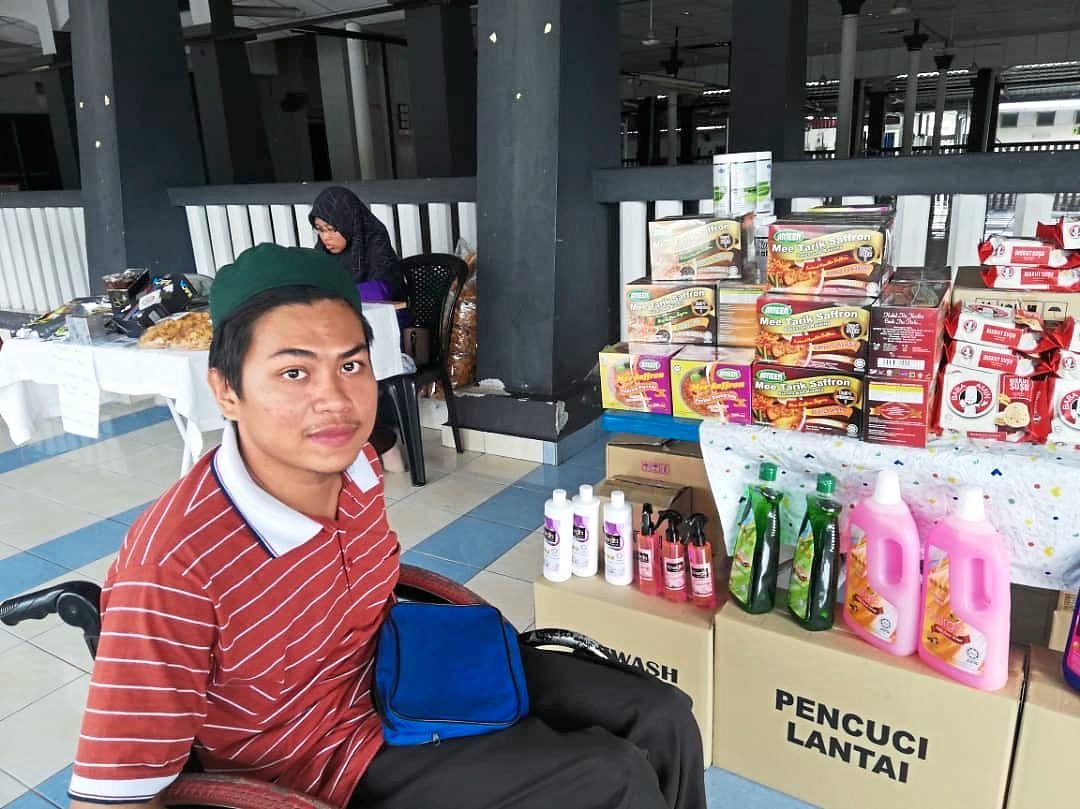 Fadzriq sells ayam percik at a night market once a week after he had to give up his job as a call centre operator due to health reasons.

Ruvindiran does Braille translation on part-time basis as he has no permanent job despite having a degree in social work and attending over 30 job interviews.

Firdaus tries any job that comes his way, including accepting commission from selling things.