Sultan Sharafuddin and Gunn at the launch of ‘Waves of Independence: Memoirs of a Malaysian Doyenne’.

Selangor Ruler Sultan Sharafuddin Idris Shah graced the launch of a memoir on the life of Toh Puan Gunn Chit Wha, a 92-year-old doyenne of pre-war and post-war life in Malaysia.

Titled Waves of Independence: Memoirs of a Malaysian Doyenne, the book covers the shifting landscape during a tumultuous era in Malaysia’s history spanning from the 1920s until present day.

It begins with her early childhood in 1928 in colonial Malaya, followed by her family’s hardships during the Japanese occupation in the 1940s.

It continues with her academic studies at Cambridge University in war-torn England, where she was one of the first few female law graduates from Girton College, University of Cambridge, at a time when women were starting to interact and travel.

Upon her return in 1952, she became the third female lawyer in Malaya.

This laid the foundation for her trailblazing and distinguished career in law, politics and society in the country.

It narrates many incidents in her life, such as dramatically saving a misguided young female communist terrorist from the gallows.

The Sultan of Selangor, who penned the book’s foreword, highlighted Gunn’s long-standing ties to Selangor. Her professional accomplishments were manifold.

Supported by Tunku Abdul Rahman and Tun Tan Cheng Lok, she stood for and was elected in 1954 as the first female municipal councillor for Petaling Ward.

In 1959, with the support of Sultan Hisamuddin Alam Shah Alhaj, the late Sultan of Selangor, she was appointed the only female state councillor in Selangor.

Sultan Sharafuddin also remarked that books like this served to remind people of the achievements of many individuals like Gunn, who played a vital role in shaping the nation through the challenges of independence and beyond and whose contributions should not be forgotten.

The book is an evocative insight into her experiences of being a pioneering female role model in Malaysia, at a time when women were neither highly educated nor presented the opportunity to achieve at a professional level.

The book is a fascinating narrative of Malaysia’s formative years and the many challenges the nation faced.

Published by Epigram Books, the book is available at Kinokuniya, Gerakbudaya, Bookalicious and Nutmeg bookstores in Malaysia as well as on the websites of Epigram Books, Faris Books and Amazon. 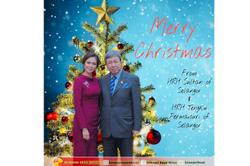