‘Tiny’ window into the past

ALTHOUGH the Koay Jetty in Penang was demolished in 2006, people can still admire the once charming jetty through miniatures of the heritage stilt houses set up at the Koay Jetty Memorial Hall in Gat Lebuh Macallum.

Koay Jetty chairman Keh Teng Hean, 57, said his father moved to Koay Jetty when he was six years old in the 1970s.

“The jetty, which was around 234 metres long, was built by my father’s boss and I grew up in the area until we shifted out in 2006.

“There were 31 wooden houses sitting on stilts along the jetty and my house was the 21st house. We used to swim in the sea outside

my house during day time and go fishing by the sea at night.

“The Bai Tian Gong (prayer ceremony) and Phor Thor (Hungry Ghost Festival) were the biggest celebrations for the residents here.

“In 2009, the property developer preserved a small department within the housing complex built on site of the original Koay Jetty with the intention of turning it into a museum.

“We decided to put up miniatures of heritage stilt houses at the Koay Jetty Memorial Hall here so that more people can understand the history of the jetty that has been demolished.

“The oldest residents at the bridge are staying at a flat nearby and they are already in their late 80s,” he said.

The jetty was once part of the busy charcoal trade, which explained the historical role Penang played in the international sea trade.

“Before World War II, the Koay Jetty in Weld Quay was a wooden jetty used by the Baiqi Koay Muslims from Quanzhou for their trading.

“After World War II, the jetty was relocated to the beach at the end of Gat Lebuh Presgrave due to competitions from the ferries and jetties nearby and concerns about security.

“During the peak of the charcoal trade in the 1950s and 1960s, the jetty was the place where more than 100 wooden boats came to load the charcoal before sailing off to other countries.

“It was also where fishing boats berthed and more than 100 coolies worked.

“The coolies’ work included inspecting, sorting and repackaging the charcoal arriving from Thailand and Indonesia and finally loading the packaged charcoal onto shops bound for Singapore, Hong Kong and the Middle East.

“In 1955, some Koay clansmen started building houses and living on the Koay Jetty.

“In the early days, non-Koays were prohibited from living on the jetty but this stipulation was relaxed in the late 1980s due to the change of circumstances.

“Some of the residents began renting out or selling their houses to outsiders.

“With the decline of the charcoal trade in the 1970s, fewer boats made use of the jetty and other

factors such as the widespread use of gas for cooking, the loss of the free port status of Penang in 1969, the younger generations going ashore to seek better paying jobs, and the lack of newcomers taking up the charcoal transporting business combined to assign Koay Jetty to history.

“Eventually, it turned into a floating residential area,” he said.

In 1975, the Penang government launched a massive land reclamation project around the Koay Jetty area for the construction of low-cost flats.

At the completion of the project in the 1990s, the end of the jetty was displaced by the reclaimed land forming an L-shape, thus turning the Koay Jetty into a bridge with one end joining the shore of Gat Lebuh Presgrave, while the other end joined the reclaimed land where the Sia Boey market stands today.

The sea that was once under the jetty has now turned into a swampy piece of land.

In 2004, the state government planned to demolish Koay Jetty for some construction projects.

Dialogues were held then between Koay See Hoon Yeong Tong and some non-governmental organisations to discuss the pros and cons of saving or demolishing the jetty.

The final consensus was to respect the wishes of the jetty residents, which was to keep pace with the times.

their group photos taken for the last time before it was finally demolished along with the nearby Ping An Jetty.

Pengkalan Kota assemblyman Daniel Gooi said although it was an enormous task to maintain the clan jetties, the state government would continue to preserve them.

“It is sad that we are unable to set foot on Koay Jetty anymore but we have to work harder for the preservation of the remaining seven clan jetties namely Ong, Lim, Chew, Tan, Lee, New and Yeoh Jetties.

“We are trying our best to help with the restoration and repair of the houses at the clan jetties, which are considered heritage buildings.

“So far, we have completed two restoration and repair projects in Chew Jetty and Lee Jetty last year.

“I have recently visited four houses in Lim, Chew, Lee and Yeoh Jetties.

“We hope that the applications for the restoration and repair works will be approved soonest possible,” he said when met at his office on Tuesday. 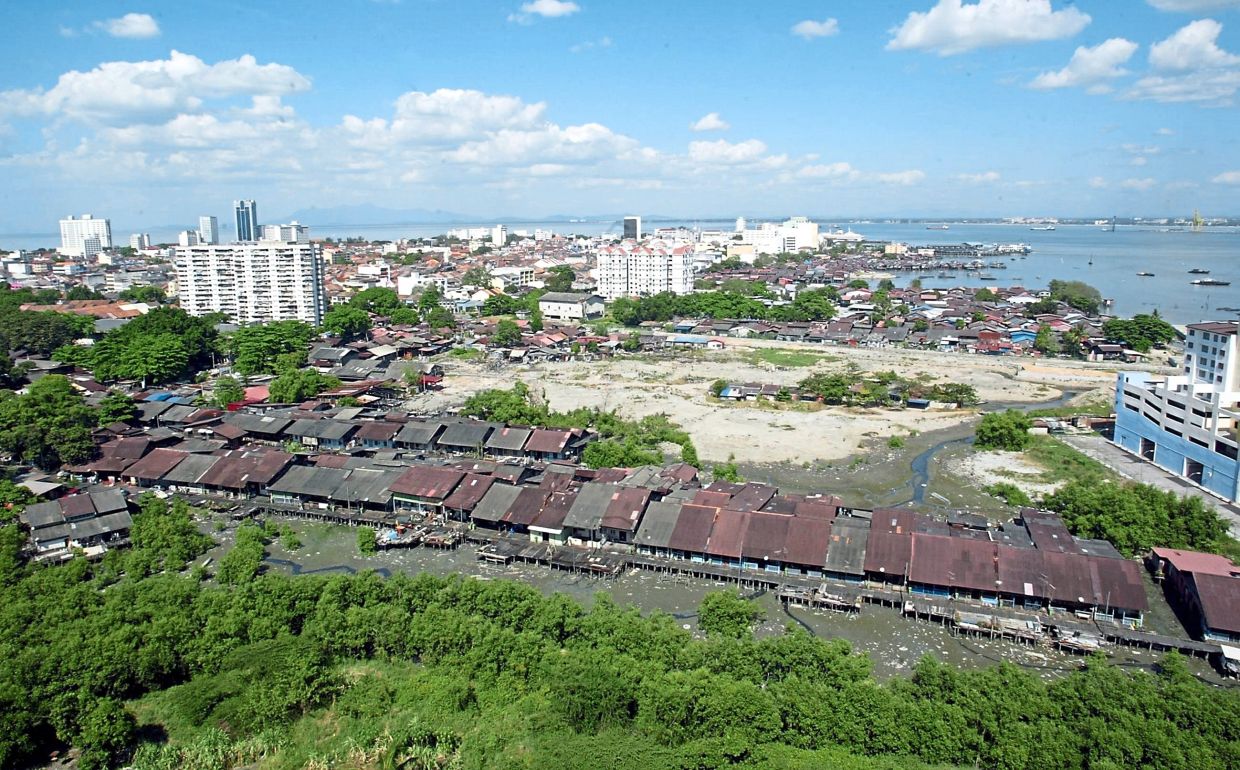 The temple which was relocated after the Koay Jetty was demolished.

A view of the Koay Jetty and Peng Aun Jetty settlements in the foreground taken in this photo dated January 2004 before they were demolished in 2006 to make way for development.