Villagers in the path of quarry operations appealing for mercy

An aerial view of the granite quarry near Bukit Juru with Kampung Sungai Sembilang less than 1km away in the background (right) in Juru, Penang. Lorries to the quarry rumble through the village, kicking up dust. — Photos: LO TERN CHERN and ZHAFARAN NASIB/The Star

VILLAGERS of Kampung Sungai Sembilang in Juru on mainland Penang have been complaining about two granite quarries located about 1km away from their homes.

They claim the quarries have been giving them problems.

Resident Che Bashah Othman, 75, who lives along the main road of the village, said she wakes up every morning to find a layer of dust covering everything.

“Over 100 trucks carrying rocks will go past my house every day. We used to leave the windows open but now we keep everything sealed shut, ” said Che Bashah, who looks after her 108-year-old mother at home.

She said she confronted the quarry operator many times but to no avail.

“I’ve asked them to have mercy on us and keep the roads clean so that dust does not get kicked up by the speeding lorries.

“Several times a day, I wet the road outside my house to keep the dust down. It’s a never-ending chore, ” she said. 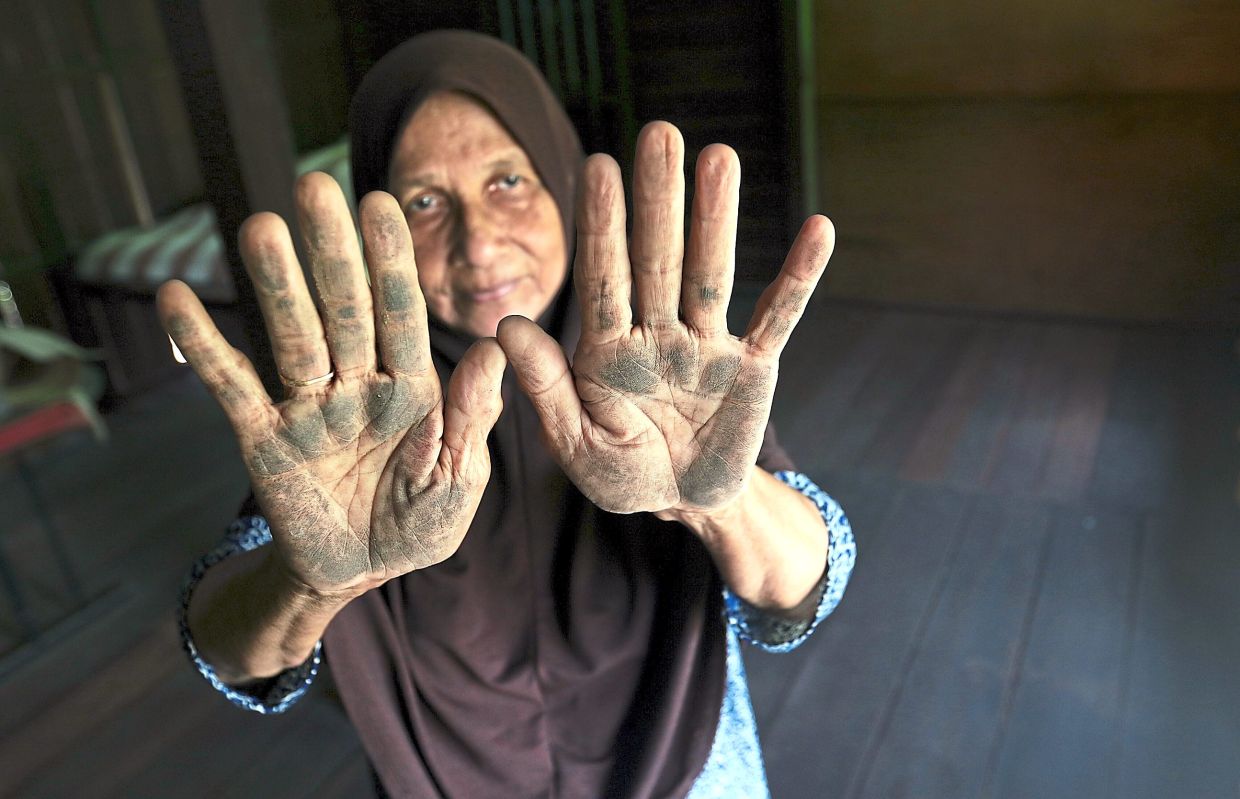 Che Bashah with her palms covered in dust after touching the floor at her house.

Another villager Mohd Riduan Hassan, 33, runs an eatery about 500m from the quarry and claimed that vibrations from the rock blasting had cracked his walls.

“Each time after they blast the rocks, we get a big cloud of dust in our village, ” he claimed.

Kampung Sungai Sembilang Village Community Management Council chairman Suhaimi Ramli, 49, said the situation was under control in the past as the quarries operated on a small scale.

“They have grown so big now. There are so many big lorries passing through our village every day and we are worried for our safety. We urge the government to stop the quarries’ operations and protect us.”

“The validity of their earthwork plans are subject to a limit on approved cutting. All work on the site must stop once the approved limit is reached, ” he said. Piles of crushed granite stones within the quarry behind Bukit Juru about 1km away from Kampung Sungai Sembilang in Bukit Mertajam, Penang. — Photos: LO TERN CHERN and ZHAFARAN NASIB/The Star

Rozali added that since both quarries have approved earthwork plans, the council would issue a stop-work order only if any violations are found.

“Our Engineering Department will head the investigation to determine if there are any violations.

“We will take stern action, including taking them to court, if the operators fail to obey.

“If roads in the village are damaged, the quarry owners are responsible for repairing them, ” said Rozali.

When contacted, one of the quarry operators near Bukit Juru issued a press statement stressing that it is in full compliance of all requirements set out by MBSP, Central Seberang Prai District Office, Minerals and Geoscience Department (MGD), Department of Environment, Public Works Department and the police.

The operator gave assurance that its blasting operations are always done with approval from the police and MGD, on top of being monitored closely by an independent third party and with full reports to the authorities. 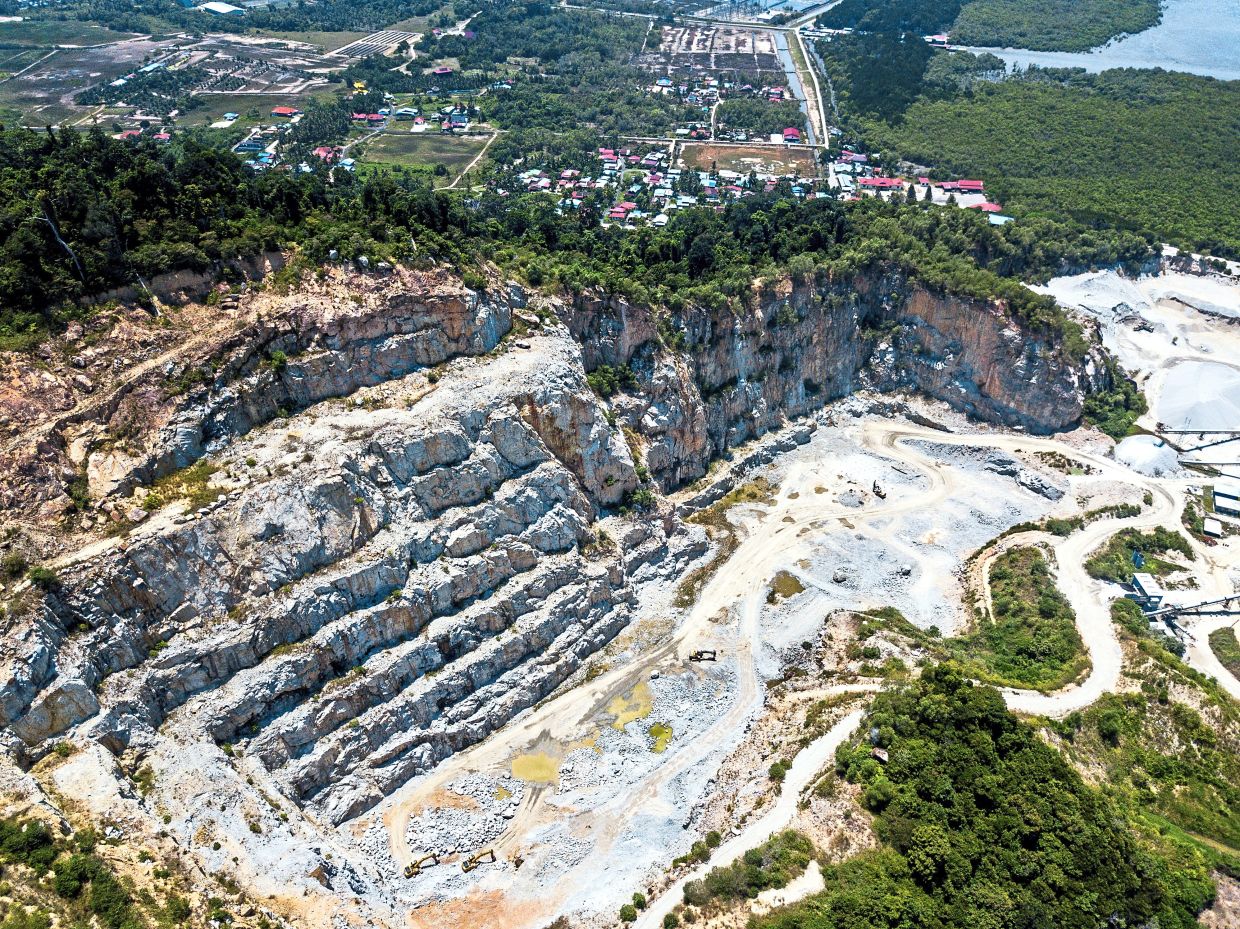 Tall rocky cliffs can be seen after a big portion of the hill was cut off at the granite quarry behind Bukit Juru.

The rock crushing plant is fully enclosed with water sprinkler systems that keep the dust down.

“We educate all the lorry drivers to drive slowly in the vicinity, within stipulated limits.

“All lorries leaving the quarry are thoroughly cleaned and the roads are swept regularly.

“This quarry has been in operation since the 1960s. Through decades, there have been continuous and regular engagements with the local community, village community management council and relevant government agencies.

“This is to ensure a safe environment is maintained for the local residents, ” the operator said. 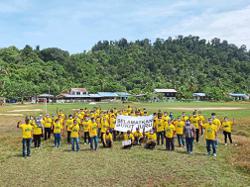