JOHOR BARU: Every breastfeeding mother’s journey is different. The experiences of 41 women have been compiled into a book by the Johor Baru Breastfeeding Mothers Support Club for women to read and learn.

The 293-page book titled “Titisan Berharga Buat Si Manja”, is an anthology of 42 stories written by 41 mothers about their breastfeeding experience, said club adviser Zulhaya Marzuki, who also contributed one story in the collection.

She said the book was aimed at sharing stories of the success and struggles of breastfeeding mothers from various backgrounds to show other mothers that they are not alone in the journey.

After initiating the book in May last year, the club made the call for submission via its Facebook page and took a couple of months to compile the scripts from participants nationwide as well as from Indonesia, she said.

Zulhaya added that the contributors were mothers aged between 25 and 41 years, who were not professional writers and held various professions including nurses, lecturers, housewives and doctors.

“There were some delays along the way where one of the contributors almost wanted to give up her slot when her mother died from cancer.

“While we understood her grief, we gave her more time and asked her to use the book as an outlet to write her story.” She eventually wrote about how her late mother’s support got her through her breastfeeding journey as a first-time mother.

“We hope stories like this will serve as a motivation and inspiration for mothers-to-be and breastfeeding mothers to stay strong and continue giving their child the benefits of breast milk, ” said Zulhaya.

She added that books about breastfeeding that were available in the market were mostly from the scientific viewpoint while their book offered a more heartwarming approach.

Zulhaya said the book committee, comprising herself and five other members, juggled family and work commitments.

They met up after work to produce the book, she added.

The club initially planned to launch the book in April but decided to push back the date to August due to the Covid-19 pandemic and movement control order.

Zulhaya added that the book was priced at RM35 and could be ordered through the club’s Facebook page.

Club chairman Dr Nornazira Suhairom said they have actively supported breastfeeding mothers since 2010, before officially registering the club with the Registrar of Societies in 2014.

The club, she added, has a network of certified breastfeeding peer counselors ready to help women who struggled or faced challenges in their breastfeeding journey.

“Besides offering breastfeeding tips and information, we conduct home visits as a way of offering support and encouragement to them.

“There are many cases where these women feel lonely as their family members are not supportive of them breastfeeding and there are those who just need some reassurance that they are doing it the right way.

“Either way, we are here to offer support and advice to help more women to breastfeed their newborn exclusively with breast milk for at least six months as encouraged by the National Breastfeeding Policy, ” said Dr Nornazira. 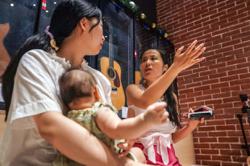