The job after the storm

By AIDA AHMAD and JAROD LIM

Mosque staff were shocked to see floodwaters from Sungai Klang and Sungai Gombak, which make up the River of Life (RoL) project, inundate the premises.

Mosque chief imam Yahya Utoh-Said said the perimeters of the mosque was filled with floodwaters at about 5pm.

“It looked very bad and the photographs on social media prove it. We also put up a live video of the situation when it happened.

“By 6pm, the river water spilled over onto the mosque yard and most of us were stranded here.

“We alerted the police and they told us to stay put until the rain stopped, ” he said. 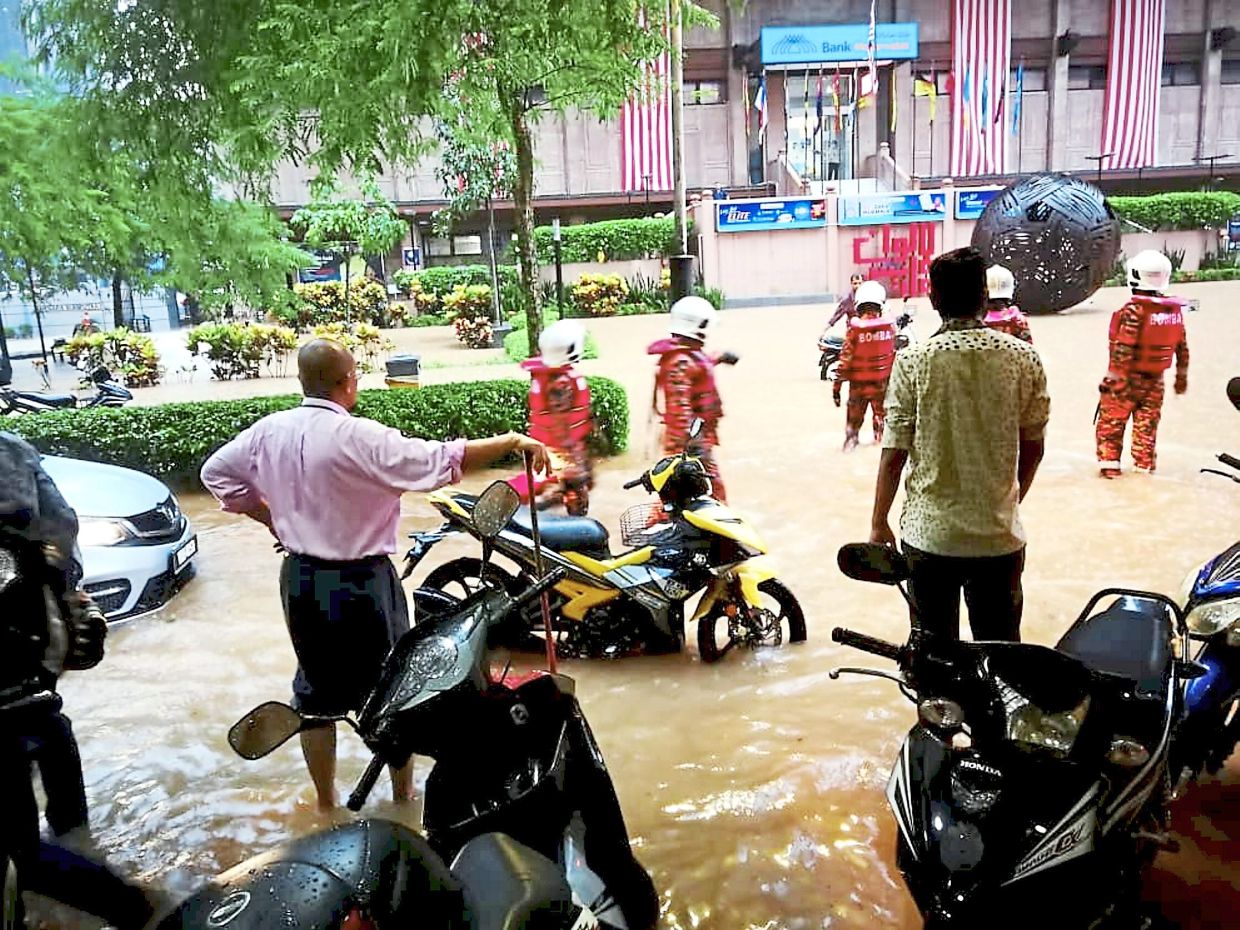 Many motorcycles and cars were trapped in the floods.

Checks by StarMetro showed that even fish from the river washed up onto the mosque’s muddy grounds and staff later placed them in a pond to keep them alive.

“In 2007, floodwaters actually seeped into the mosque, ” he added.

Mosque staff Azmarul Husnika said the floods lasted about 20 minutes before receding at around 6.30pm.

“We helped clean up the grounds because there was a lot of mud that washed up, ” he said, adding that since the start of the movement control order (MCO) in March, mosque-goers were not allowed to loiter around the premises once they finished praying. A tree fell onto a house at Kampung Padang Balang in Jalan Gombak, Kuala Lumpur, during Thursday’s downpour.

A chargeman with Ekovest Bhd, the RoL developer, Syed Mohd Azizi Sembak was at the mosque to do maintenance work on the Dancing Symphony Fountain and Blue Corridor area yesterday.

“We needed to clean up the fountain located behind the mosque, clear off rubbish and use water jets to clear the mud.

“We have major cleaning work to do because of the floods, ” said Azizi.

He said the wall which was lit up with blue lights along the riverbank at night, needed to be repainted.

“The electrical system along RoL was shut down on Thursday because of the floods, ” he said.

And this, she said, was despite initiatives to clean up city drains on Thursday morning.

She said the recorded rainfall on Thursday was at 100mm to 200mm cumulatively.

“Normally, flash floods can be expected when the rainfall is over 60mm per hour.

“On average, it does not pass more than that, ” she said. A cyclist wading through floodwater in Kampung Baru, Kuala Lumpur.

“The cleaning work started as soon as floodwaters receded at about 9pm and is expected to be completed by the end of the day, ” Norhayati said yesterday.

She said that apart from the floods, DBKL also received more than 10 complaints of fallen trees around Wangsa Maju, Setapak and Gombak.

“DBKL’s Emergency Unit worked with the Fire and Rescue Department and Malaysian Civil Defence Force to address the issues, ” she said. Vehicles caught in traffic gridlock along Jalan Kinabalu, near the DBKL headquarters, as the water level in Sungai Gombak kept rising.

She noted that Kampung Padang Balang in Jalan Gombak had the most number of fallen trees.

“There were one or two cases of trees that damaged homes, ” she added.

The Kuala Lumpur Fire and Rescue Department stated that floodwater levels reached 1.5m in Lebuh Ampang and one metre in other areas.

Norhayati said flood victims housed at relief centres around the city were sent back home as of yesterday afternoon.

Alliance for Safe Community chairman and former DBKL advisory board member Tan Sri Lee Lam Thye said the riverbanks in the city burst at the seams because the drainage system could not handle the downpour on Thursday.

“The authorities should have been more prepared to handle the effects of heavy storms especially during this time when we experience the effects of the South-East monsoon from May until September.

“This is a sign that the entire drainage system in Kuala Lumpur must be urgently reviewed.

“The problem is exacerbated mainly by the current development in the city.

“If necessary, DBKL should allocate more money and resources for drainage improvement at the sites that are being developed for high-rise buildings, housing and infrastructure projects, ” said Lee.

He said clogged drains were a perennial problem.

“Maintenance is unsatisfactory and poor silt traps at construction sites result in mud and construction debris getting into public drains and choking them beyond their capacity to drain the excess water quickly.

“Frequent checks must be made at all construction sites to ensure public drains adjoining the sites are not clogged, ” he added.