RESIDENTS in Taman Sungai Duri in Jawi on mainland Penang had only minutes to save their belongings when water started rising in their homes as it rained on Thursday.

And some had never in their lives seen flood waters gushing into their homes.

Engineer Faisal Othman, 37, whose furniture was all damaged in the flood, described the evening’s incident as happening too fast.

“It started raining and we saw murky water outside the house rising.

“I quickly went out and drove the car to safety on higher ground.

“When I returned to the house, about five minutes later, water had gone in and eventually rose up to my waist. It was so fast, ” he said.

Yesterday, Faisal and his family were seen cleaning the house and drying up their belongings, including damaged furniture. Faisal with his wife Norharidah Aziz, 31, cleaning their house after the flash floods in Taman Sungai Duri in Jawi on mainland Penang.

He said the last major flood he experienced was in September 2017 but this was the worst of all since he moved into the house in 2012.

“Everything in the house was damaged because we never expected our house to ever be flooded.

“When water started gushing in, we were shocked. The washing machine, refrigerator, television cabinet and everything on the floor were damaged, ” she said.

“We evacuated 230 people from 70 houses in Taman Sungai Duri when water rose up to 1m at about 7pm on Thursday.

“The victims were evacuated to the Sungai Duri Indah surau and multipurpose hall there. Residents throwing away belongings that were destroyed in the floods.

“Later, at about 10pm, we evacuated 62 people from 45 houses in Kampung Sungai Kechil to the multipurpose hall nearby, ” he said.

A 4m-long python slithered out of its hiding place and swam out into the open, but voluntary firemen in Jawi managed to catch it.

Jawi assemblyman Jason H’ng Mooi Lye, who was down at the scene, said the flood was brought by heavy downpour from upriver in Kedah.

“Large volumes of water came through Sungai Jejawi when it broke its banks.

“We are in discussions with the Drainage and Irrigation Departments in Kedah and Penang for long term solutions.

“Among the proposals are to build several large retention ponds to contain water whenever there is heavy downpour, ” he said. 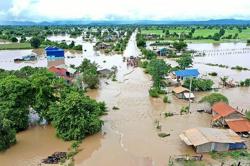