Judges tasting the food prepared by the students for their final exam. Photos: AZMAN GHANI/The Star

THE pioneer batch of students from “Program Menyantuni Gelandangan” (PMG) are ready to put their newly learned skills to good use.

PMG is a pilot support programme for the homeless in Kuala Lumpur, launched last year by Federal Territories Ministry and Kuala Lumpur City Hall (DBKL). However, it was later opened to anyone interested in picking up a trade skill.

Non-governmental organisation Sols 24/7 was appointed to manage the free programme which aimed to get students better employment opportunities or help them to start small businesses.

PMG director and Sols 24/7 chief operating officer Alya Syahida Allias said she was proud of the students’ progress over the months as they were improving in their chosen skill.

“Many of them joined without much confidence but now, they can show off their skill.

“Some are even making money with what they have learnt, which is very encouraging, by operating small businesses from home,” she said.

“I am proud of the students.

“We have people who signed up for classes for many different reasons but as long as they are dedicated to bettering themselves, we take them in.

“Top students for the hair cutting, cooking and baking classes are rewarded with starter kits and job opportunities to help give them a boost,” she elaborated.

The top 10 students in the hair cutting classes each received a hair-cutting kit worth RM500 each.

As part of their final exam, the top 15 students put their skills to the test by giving free haircuts to residents at PPR Sungai Bonus on July 25.

Their teacher Mohd Harriz Ahmad gave each student points based on their work.

Mohd Harriz said all 15 students mastered the basics and techniques to achieve the customers’ desired look.

“All they need now is a lot of practice because the texture and shape of hair varies from person to person.

“The majority of the students have been practising on mannequin heads up until now,” he said.

Salwa Zain, 30, from Mont Kiara was among those who got a hair-cutting kit.

She recently started a spa business and was looking to expand her services when she learned about the free classes.

“Private hair-cutting courses are very expensive, so I am glad to have learnt it here for free,” she said.

Factory worker Rozaini Ibrahim, 40, from Shah Alam said he earned some money during the movement control order (MCO) by cutting his workmates and neighbours’ hair.

“I often post about this class in my social media. Since the barbers were forced to close at the start of MCO, some of my followers on social media asked for my assistance to cut hair,” he said, adding that this helped supplement his income.

There were also those who learned the skill so they could give back to community.One such person is Karen Liew, 45, an administrator who wanted to learn how to cut hair so she could give free haircuts for the needy.“Instead of giving money, I rather offer such services to the needy,” she said.

Students who took cooking had their final exam at Medan Tuanku Transit Centre on July 26.

The fact that the judges were scouting for possible candidates to be given an opportunity to supply food to food trucks on a regular basis was not known to the students.

School canteen operator Nor Azura Mohd Hanib, 39, from Selayang Baru, said she learned new recipes to add to her menu.

The single mother of four also does catering over the weekend to supplement her income.

“I get orders for nasi lemak and fried noodles for small parties.

“My customers enjoy the new offerings that I have such as Chicken 65 and Butter Chicken,” she said.

The mother of three admits to have benefitted from learning new recipes from the course.

“There are many repeat orders for my chicken chop,” she said.

Alya said Sols 24/7 was in discussions with food truck operators in the Klang Valley as part of the organisation’s effort to find opportunities for the students to sell their food.

“However, we will not kick off the initiative until the MCO is lifted.”

She said the student bakers were the last to finish their final exam which was split over two days --- Aug 8 and Aug 15.

“The students were required to bake, decorate and present a tray of chocolate brownies.

“Some students have started operating small-scale businesses from home during the MCO.

“They can improve their skills and develop their business in the future,” she said.

She added that the top five students would get to bring home the baking tools including the oven used during training, to set up their own baking business at home if they wished.

“There were a few bakeries interested in hiring our top students,” said Alya.

“But that plan has been put on hold now as the bakeries’ business is slow.

“We encourage students to promote their baked goods to friends and family, and start selling while waiting for opportunities to open up,” she said.

Mother of two, nurse Norazleen Musa, 35, from Shah Alam was one of the many baking talents.

Norazleen signed up for the classes to cultivate her older daughter’s interest in baking.

“I was not into baking but my 13-year-old is very interested in it.

“She likes to bake and even won a minor baking competition. Since the classes at PMG required participants to bring their child along, it was perfect for me.

“After attending the classes, I have grown to like baking too.

“I have also successfully sold some of my bake goods and this is giving me additional income.

“But I have put my side business on hold as I just moved into a new house and will resume after I am settled,” she said. 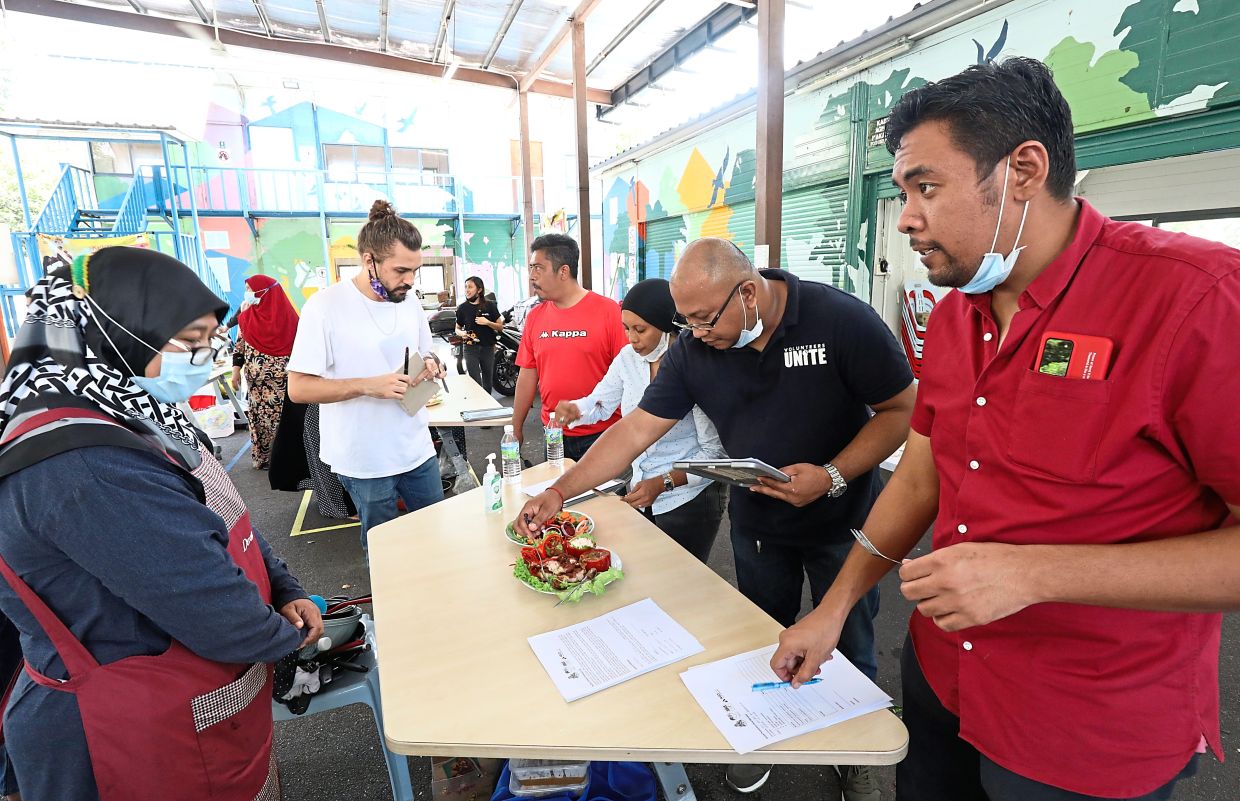 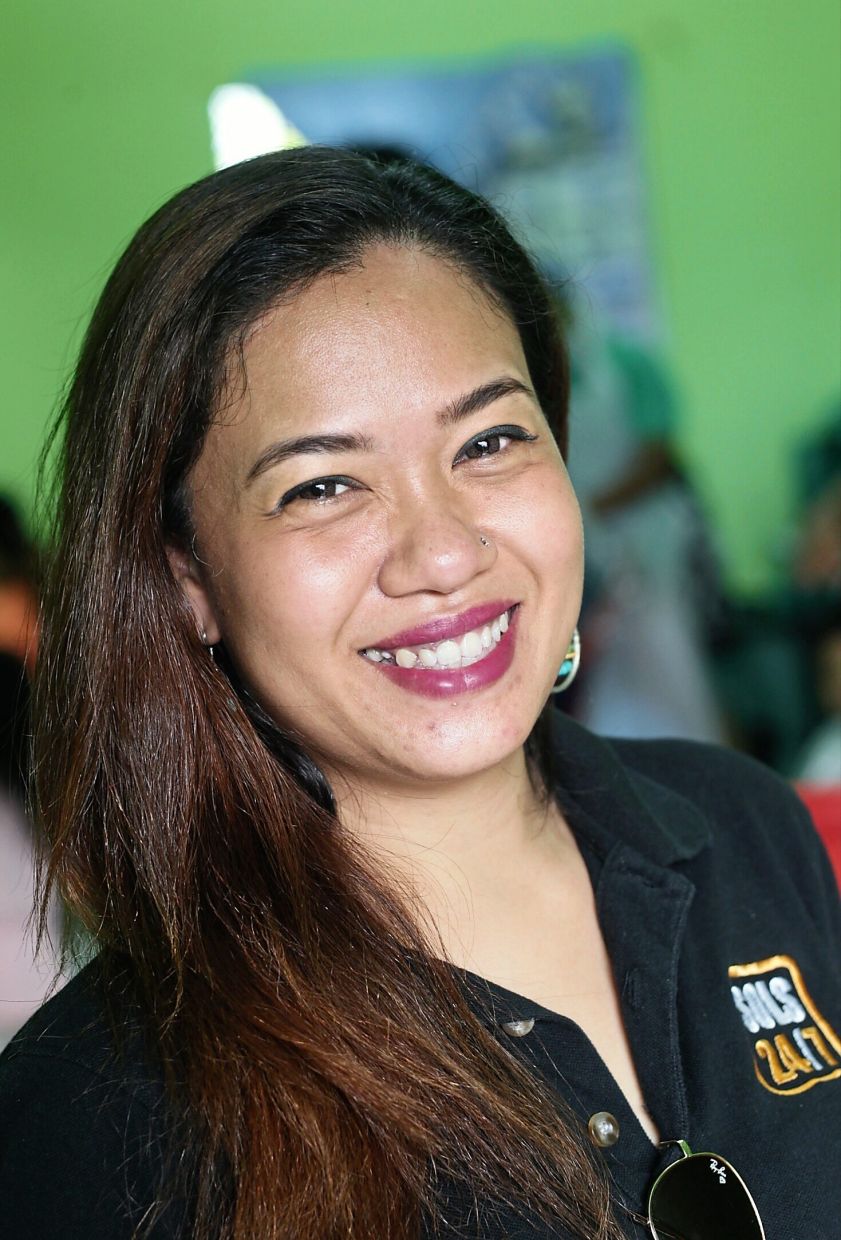 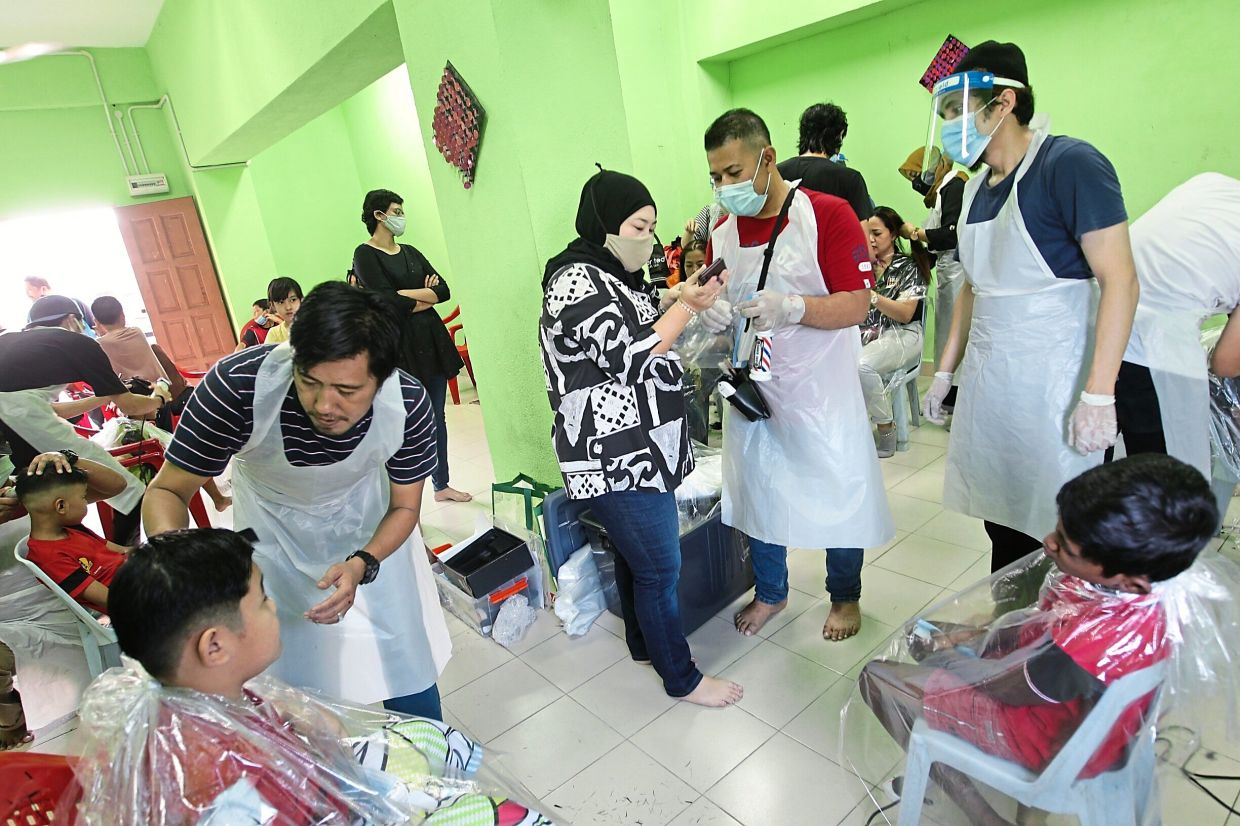 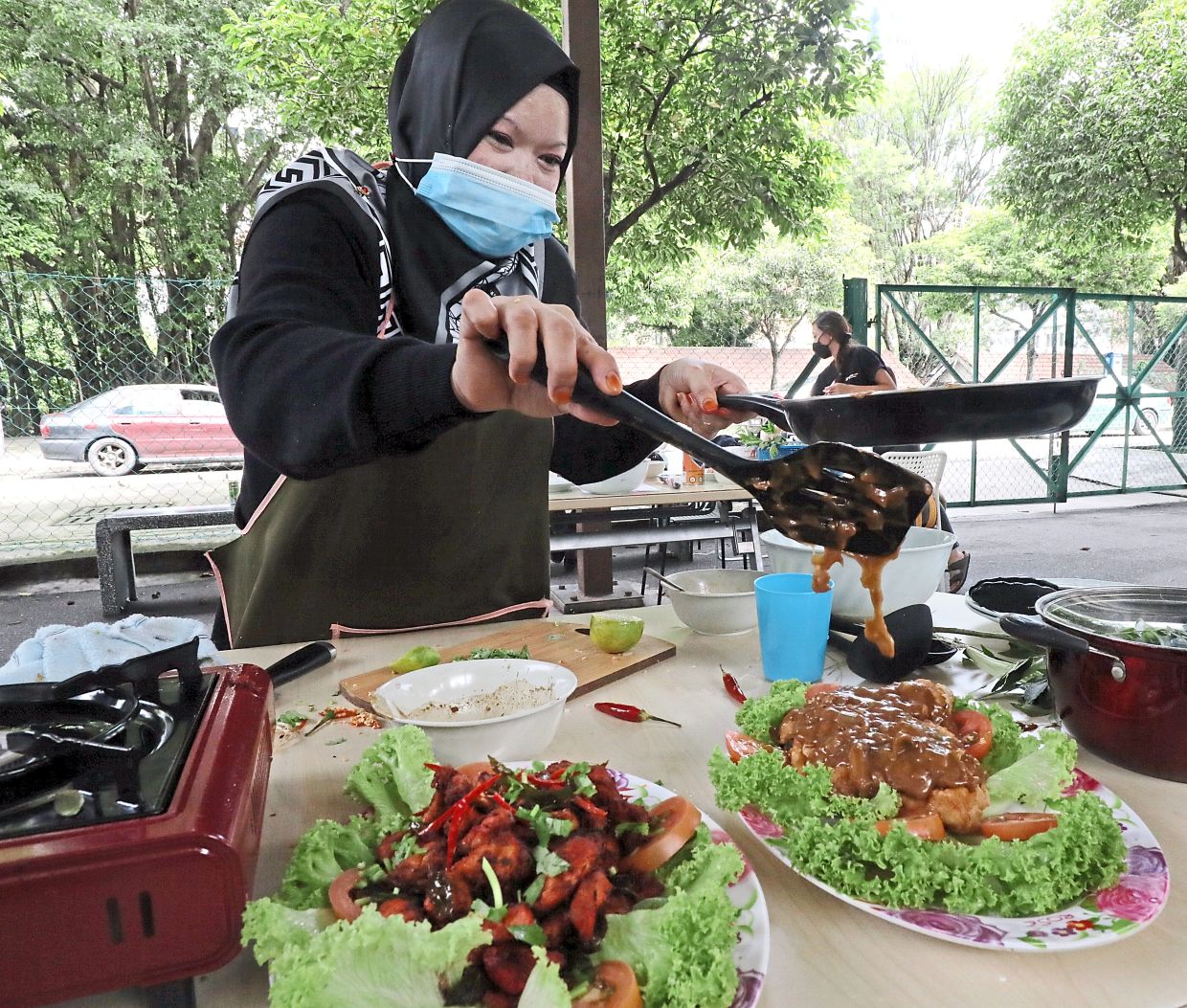 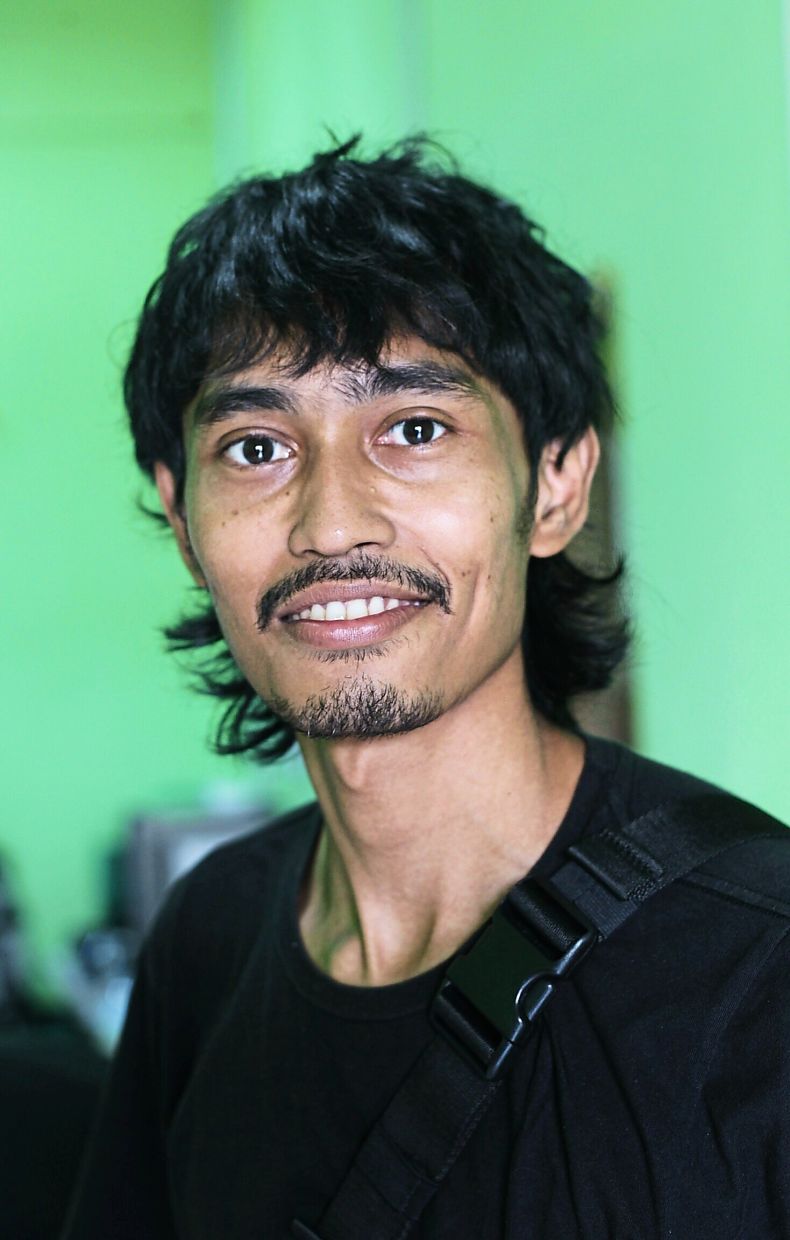 Judges tasting the food prepared by the students for their final exam. Photos: AZMAN GHANI/The Star

Alya says she is proud of the students’ progress over the months as they have shown improvement in their chosen training programme.

Rosidah putting the final touches to the chicken chop dish which has become a favourite among her customers.

Top baking students were required to bake, decorate and present a tray of brownies as their final exam.

Mohd Harriz said all 15 students have mastered the basics and techniques in hair styling.