Residents of Pangsapuri Mutiara Magna in Kepong have been actively involved in monitoring Sungai Keroh since the middle of last year. — Photos: SIA HONG KIAU/The Star

THERE is no denying the importance of rivers as a water source for humans and wildlife.

Over the years, these precious waterways have been taken for granted or even neglected with illegal dumping of waste leading to river pollution.

The public’s disregard for our natural resources is worrying but the initiatives of government agencies, environmental groups and non-governmental organisations in raising awareness of the need to save our rivers is bearing fruit.

More communities, especially those living in high-rises, are transforming polluted riverbanks into gardens where fruits and vegetables are grown. 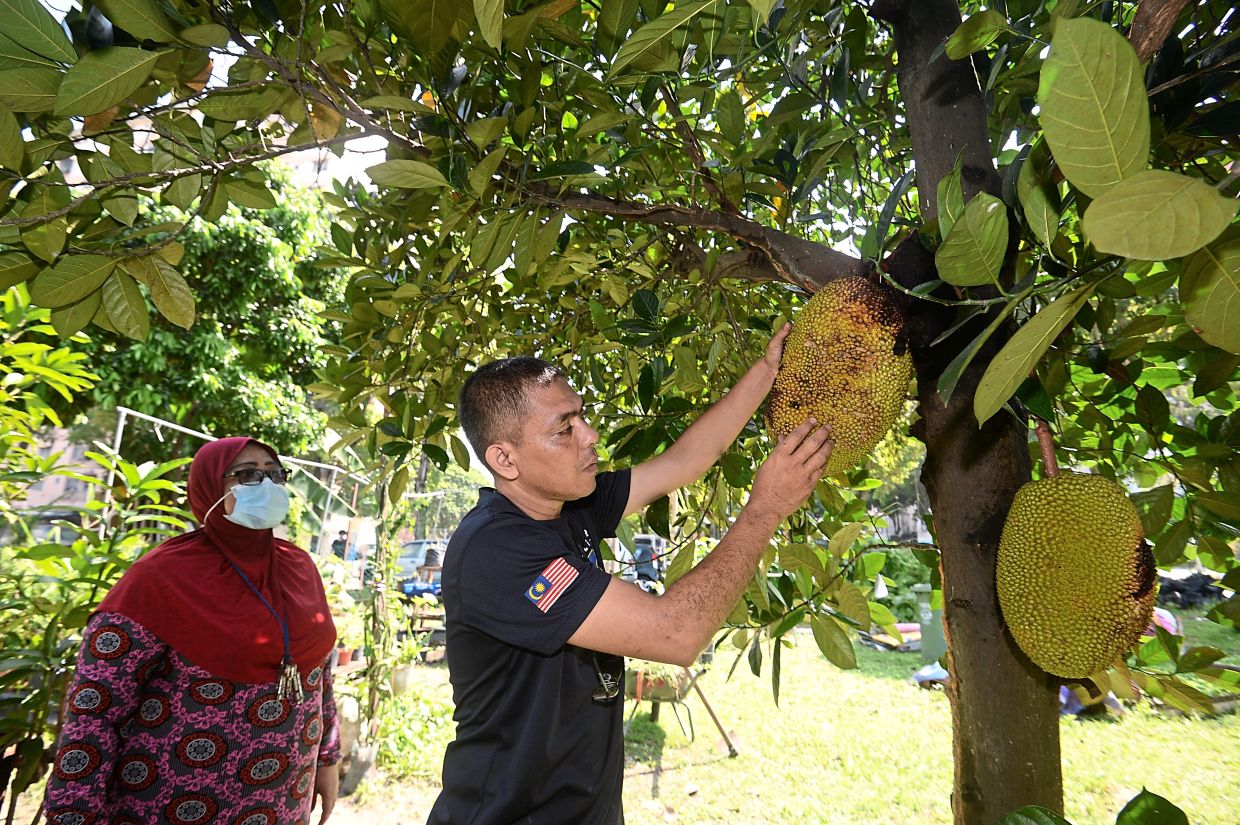 Zuredisham checking on jackfruits to see if they are ripe. These are just one of the trees that residents have planted in Sungai Keroh, Kepong.

Global Environment Centre (GEC) river care programme coordinator Dr K. Kalithasan said, “Community empowerment has helped them become guardians of the rivers who act as ‘frontliners’ and report to the authorities when they come across illegal dumping activities.

“This indirectly helps improve the water quality of rivers as their gardening deters illegal dumping, ” he said.

The riverbank of Sungai Keroh in Kepong, which was once home to drug addicts, has been turned into an edible garden.

About 15 residents from Pangsapuri Mutiara Magna low-cost flats have been actively involved in monitoring the river since the middle of last year.

Resident Zuredisham Zulkfli, 50, said the river was heavily polluted with discarded items such as bottles and plastic. 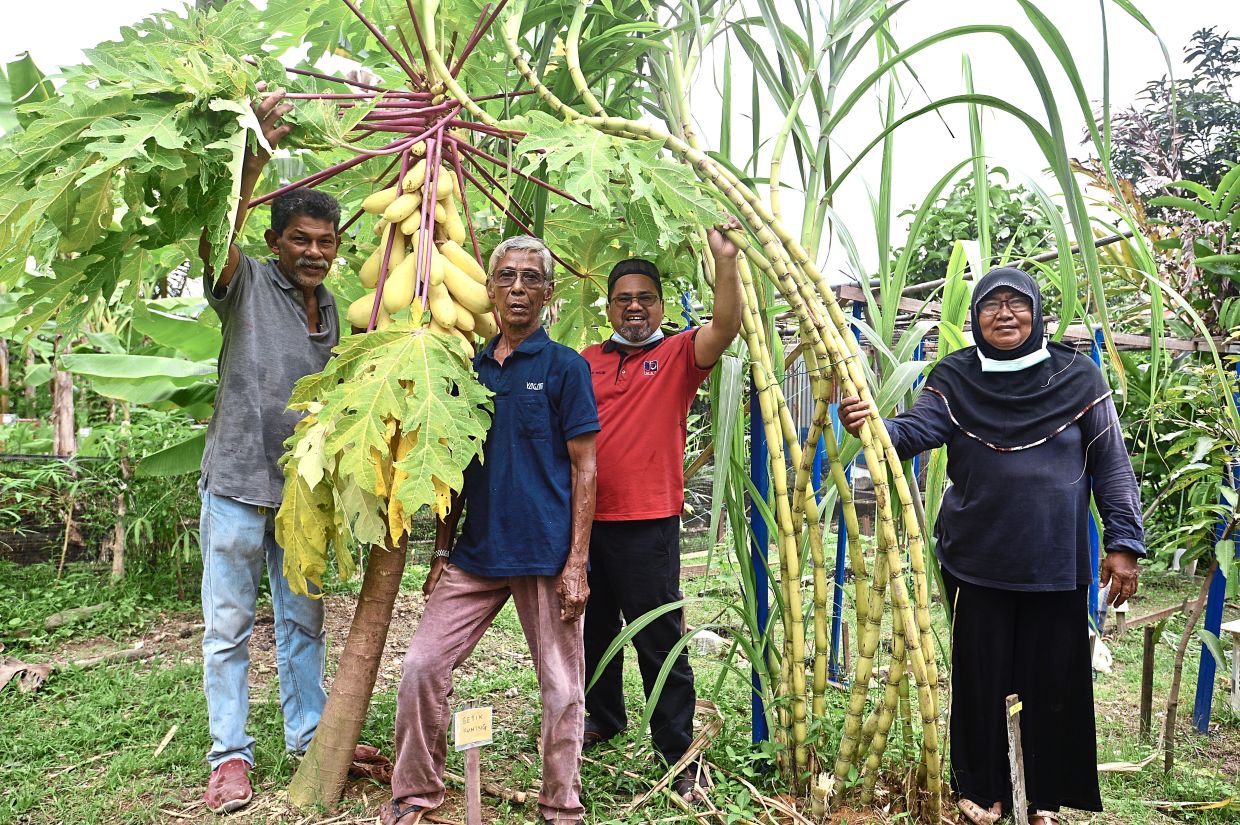 Mohamad Halim (third from left) and his neighbours from Rumah Pangsa Taman Keramat at their community garden.

“There was an illegal settlement by the riverbank some time ago, and the residents threw waste directly into the river.

“They have since moved away and we have been clearing the riverbanks as there was so much rubbish, ” he said, adding that the river was now a recreational spot for anglers.

Residents have planted vegetables such as lemongrass, spinach and mustard greens along the banks too, Zuredisham said.

“We can see dragonflies and this is a good thing. The area was once neglected but with the community’s hard work, we are now able to harvest fruits and vegetables, ” he said.Zuredisham added that water quality had improved since the movement control order (MCO) came into effect.

Despite their efforts, the residents still have to face challenges such as illegal waste dumping, especially at night. 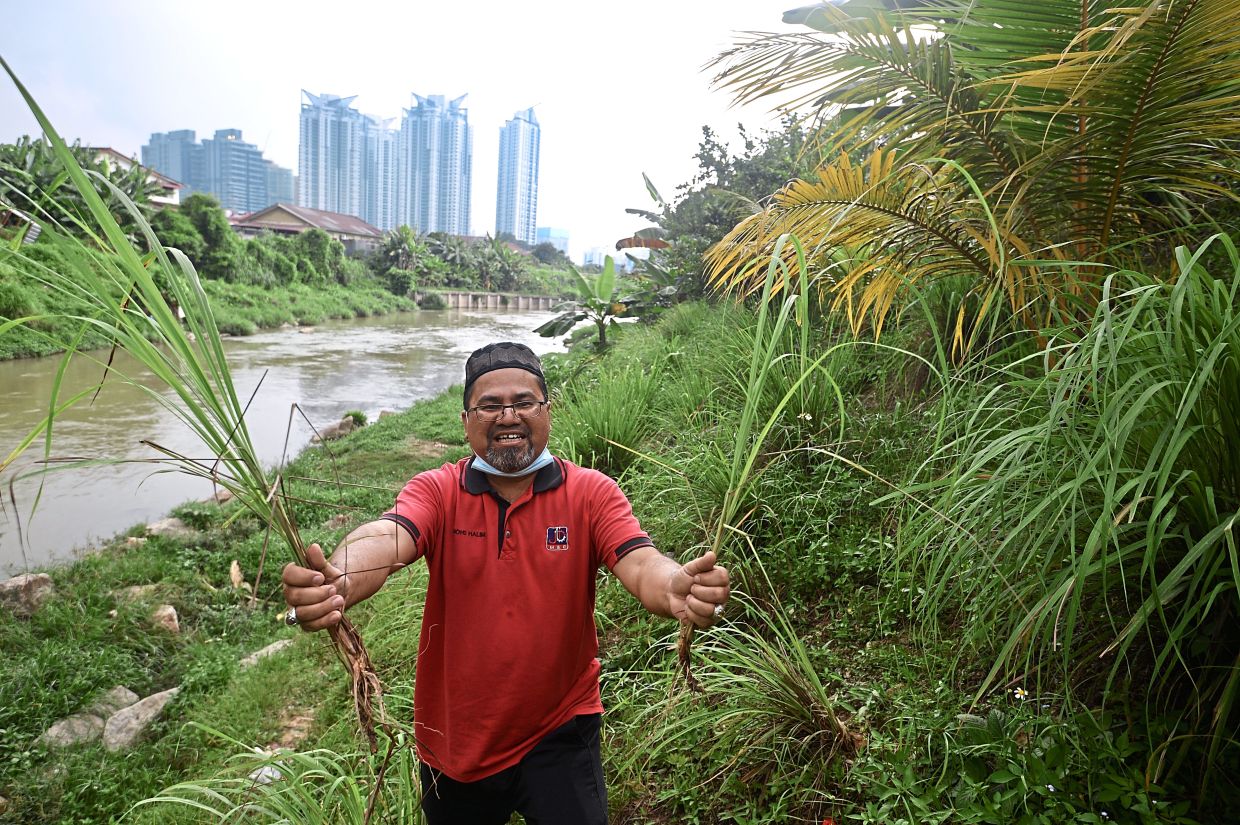 Mohamad Halim holding up lemongrass which is among the produce planted at the banks of Sungai Klang.

Over at Rumah Pangsa Taman Keramat in AU2, Hulu Kelang, some 20 residents are pitching in to maintain the cleanliness of Sungai Klang.

The community has been actively rehabilitating the banks of the river since 2013.

They have even planted padi along the riverbanks.

Gathering together at the garden while tending to their plants helps this community build a better relationship.

Resident Mohamad Halim Mohamad Saidi, 48, said in 2013, waste such as mattresses, tables and chairs were carelessly discarded into the river.

The riverbanks were unsightly and people kept away from Sungai Klang.

However, things started looking up when Ampang Jaya Municipal Council (MPAJ) and GEC teamed up to save rivers in the area.

“We have planted padi, brinjal, asparagus and fruit trees such as banana and papaya.

“We also do composting as well as rainwater harvesting at our riverbank garden, ” said Mohamad Halim, adding the place had become their refuge.